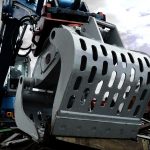 Contractors and OEMs alike are forming an attachment with Mutley Plant Services.

“Heavy engineering runs through the company’s DNA,” explains Mark Cheeseman of Mutley Plant Services, “and that’s why we’re able to fabricate the solutions that our end user customers demand. Not only that but OEMs come to us because our design and build expertise on both attachments and excavators gives them the flexibility to supply customers with more bespoke products across a range of sectors.”

The firm that would come into being in 1992 was actually named in honour of Mark’s laugh, which is apparently an uncanny echo of Dick Dastardly’s faithful hound, but what has been achieved since then is certainly no cause for mirth, having proved to be many a contractors’ best friend with its expertise in attachments and excavator modifications.

As a business, Mutley operates from two facilities – engineering works in Aylesham, outside Canterbury, and Dover, the latter where its own products are manufactured, and an additional, sub contracted paint facility.

The MD of the Kent-based outfit actually began his business journey repairing and servicing diggers in the field, which quickly developed into specialised modifications for machines.

Attachments, for both sales and rent, were added as a proposition in 1997, and today Mutley is a dealer for some of the industry’s best known brands, including Demerac, Indeco, Kinshoffer and Promove. “Over the years we’ve added a proposition from a particular manufacturer where we’ve had a gap so we can offer our clients as a wide a range as possible, whilst the brands that we represent have remained at the premium end of the market.

“As a consequence, we offer a full portfolio of demolition and construction solutions, including sorting grapples, multiprocessors, shears, magnets and breakers. Dynaset are now a part of our portfolio and we also took on Indeco for their range of heavier breakers, whilst Promove cover the lighter units.

“We will both sell and rent attachments but we also do good business in adapting these to particular applications as well. Clamshell buckets for deep excavations are proving particularly popular and these are reinforced in our workshop to better cope with the demands of thick clay soil, for instance.”

On its work tool rental fleet, Mutley Plant Services has more than 100 units on its books to suit excavators from 3 to 100 tonnes, all of which can be prepared to fit a particular excavator, transported to site and installed on the machine by the company’s own field engineers.

The repair and refurbishment of attachments is, in fact, another facet of the Mutley Plant Services business, and bespoke attachments can be fabricated. The company’s modified tools have been used in anger as far afield as the demolition of a lifeboat station at Selsey Bill in East Sussex, to the building of a jetty in Qatar.

In the latter job, Mutley was responsible for the hydraulic attachment that lifted and placed 7 ½ tonne pre-cast blocks into precise positions under the water.

In excavator enhancement Mutley can count demolition and construction contractors amongst its clients, as well as OEMs and their dealers. “From an end user’s perspective, the plant industry is set up to produce a standard product, but can often be selling into market where much more is required of the machine – and that’s where we come in.

Maximising the reach by fabricating a longer boom is a well-practised service of ours, whilst the popularity of protective guards is increasing. We can also improve the cabin protection for the driver, as well as install things like impact protection, cyclinder protection guards, and handrails.

It is these kind of bolt on extras that demolition companies in particular need if their machinery is to be fit for purpose.

“What we offer the big machine makers is the flexibility in the marketplace to sell a base machine with the addition of just a few modifications to either a drainage, construction or demolition contractor, depending on their requirements.

“Their standard machines might not be suited to all three industries, but when it leaves our workshop it will have the tailored features it needs. If it’s a demolition machine, for instance, we would straighten the boom, modify the cabin for improved visibility, and reinforce the glass and cylinders. can be achieved by increasing the excavator’s footprint.”

It is rare that Mutley cannot fulfil the requirements of a client, and has over the years produced some unique equipment for its clients. Contractors will often provide Mark and his expert team with nothing more than a concept, and the journey from design to installation in the field is the engineering challenge.

“Last year we had a demolition contractor working on the University of Plymouth who was looking to get away from the traditional three-piece, high reach boom arrangement in favour of a two-piece. This would obviously entail sacrificing some reach, but would allow for heavier duty use at ground level. That was a 67 tonne machine, and we achieved a 22 metre reach with the duty of a 35tonne excavator.”

Mutley’s services are in fact much in demand amongst demolition contactors. Inevitably this is a market that needs these conceptual ideas more than construction, where the more standard digging machines are the staple.

By contrast, specialist applications, like the demolition of a pre-cast concrete car park in south of England in which Mutley was recently involved, are the preserve of the demolition industry. On this site the panels needed to be both cut and demolished, but the job was complicated by a maximum floor loading of 16 tonnes.

With extra counterweights and a redesign of the hydraulics, Mutley added a Demarec MQP 30 D Concrete cracker on the end of the boom arm, and the contractor was able to successfully take down the building.