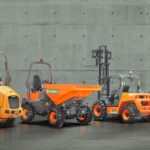 During the pandemic, technology quickly became our saviour and some manufacturers were astute enough to use it to continue to showcase their products. Amongst them was Ausa, who revealed five new machines to the world via a major online launch.

Of any class of equipment site dumpers have perhaps been under the most scrutiny over the course of the last few years, with manufacturers looking to address some of the safety and operator welfare concerns that contractors have raised. Amongst the stars of the Ausa show was its latest solution in the form of the DR601AHG reversible dumper.

“In the years ahead, it is likely that the market for six tonne units and above will come to be dominated by reversible machines,” explains Ausa’s Sales and Marketing Director, Juan Urkijo, “and we expect the DR601AHG to have a significant impact in the UK. It answers some of the safety issues that have been raised with the larger units, whilst at the same time adding more choice to a range that now can now boast considerable versatility. Hydrostatic transmission is also destined to be a standard feature in the future, for example, and we offer a hydrostatic option in every weight class.”

The 6,000kg DR601AHG is itself an example of that trend towards reversible and hydrostatic technologies. Its seat will rotate 180 degrees, with all controls instantly adjusted to the driver’s new position. Powered by a Stage V compliant, 55.4 kW Deutz engine, fuel consumption and C02 emissions can be further reduced with an ECO Mode that automatically regulates the engine speed, whilst the Smart Stop plug-in system will shut down the engine when it’s not in use and it is safe to do so.

Also in the realm of safety, Ausa’a Hill Holder system will be a particularly welcome feature when working on inclines, where the unit will engage the brakes when you release your foot from the accelerator at zero speed. Indeed, safety is a principle that runs through this Spanish manufacturer’s DNA and that is reflected in the range of options available, as Juan outlines: “In addition to reversibility, forward facing cameras are standard from the D450AHG machine upwards, and this system can be complemented with a rear camera and proximity sensors. In the three tonne, of course, this is less of an issue – and our skip design ensures maximum frontal visibility – but the Full Visibility System is still there as an option.” 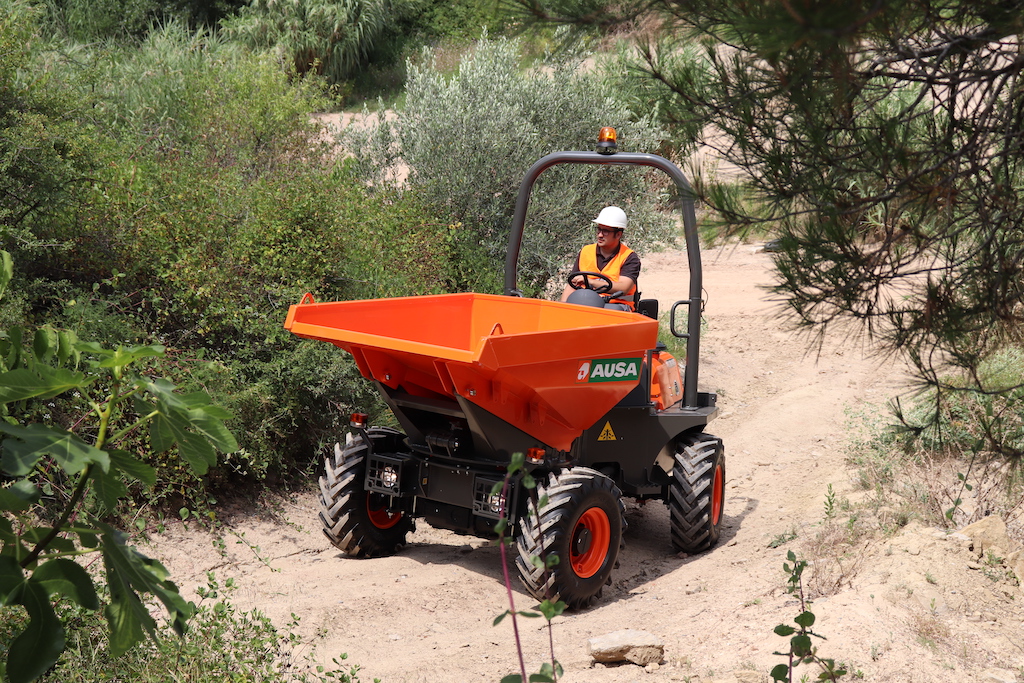 Ausa introduced a new hydrostatic, 3-tonne payload dumper during the same launch event, featuring the added versatility in operation of a side-tipping skip. With a chassis, transmission and engine cooling array that has all been directly transferred from its larger 4.5tonne sibling, the D300AHG is built with a reliability and durability beyond its stature. The introduction of Stage V has demanded that everything above 19kW in a compact plant manufacturer’s catalogue should be renewed and, whilst that’s been a challenge, it is equally an opportunity. “The D300AHG has been designed as a high performance but cost-effective unit,” enthuses Juan. “We’ve squeezed every possible kW of power from the small but agile 18.5 kW, four-cylinder and 1.5 litre Kubota engine, to provide lower fuel consumption with more power, all without the need for a diesel particulate filter (DPF).” 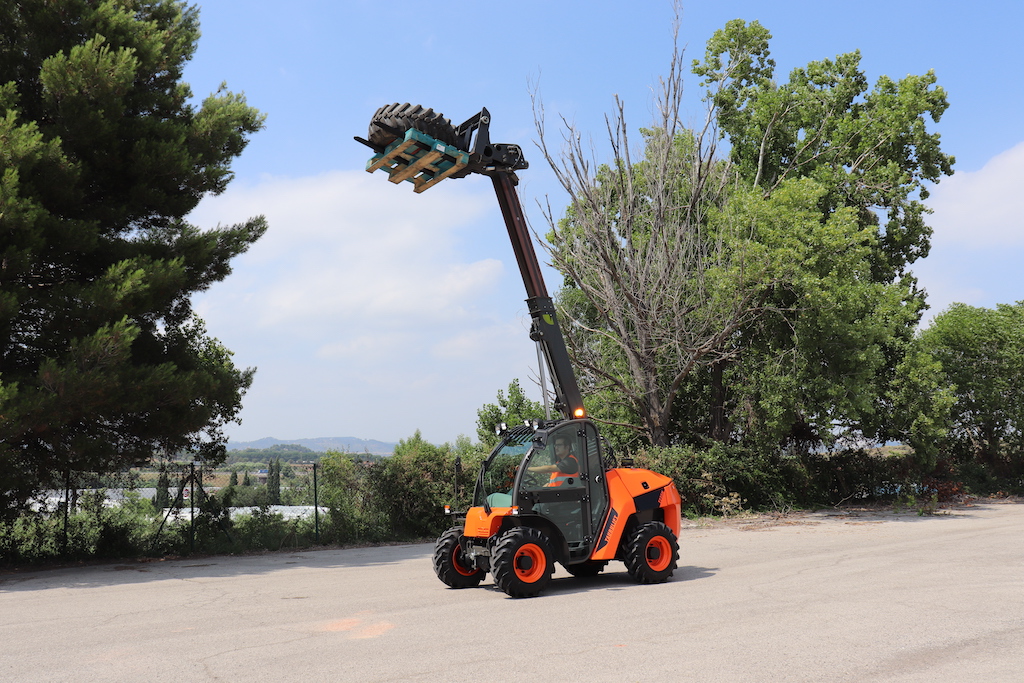 Telehandlers
The extensive Ausa range also encompasses telehandlers, and one of the highlights of the presentation was the introduction of the new T204H and T235H units. “Sales of our telehandlers have increased four-fold in the last couple of years, and that’s been led by the T144H, a machine which is compact enough to be accommodated on a trailer. Whilst our new telehandlers have the same name as the previous models, they have been redesigned to offer a better user experience.”

Both powered by a 32.5 kW Kubota engine, the T204H has a 2,000kg payload and a maximum lift of 4.2m. In turn, the T235H can carry up to 2,300kg and has a maximum lift of 5m. A 4x4x4 drive and three steering modes – front-wheel, all-wheel and crab mode – means these units stand ready to tackle any terrain or tight spots on site. Quick connect couplings turn these telehandlers into multi taskers, all of which can be controlled by an operator who can enjoy a spacious cab and 360° view. 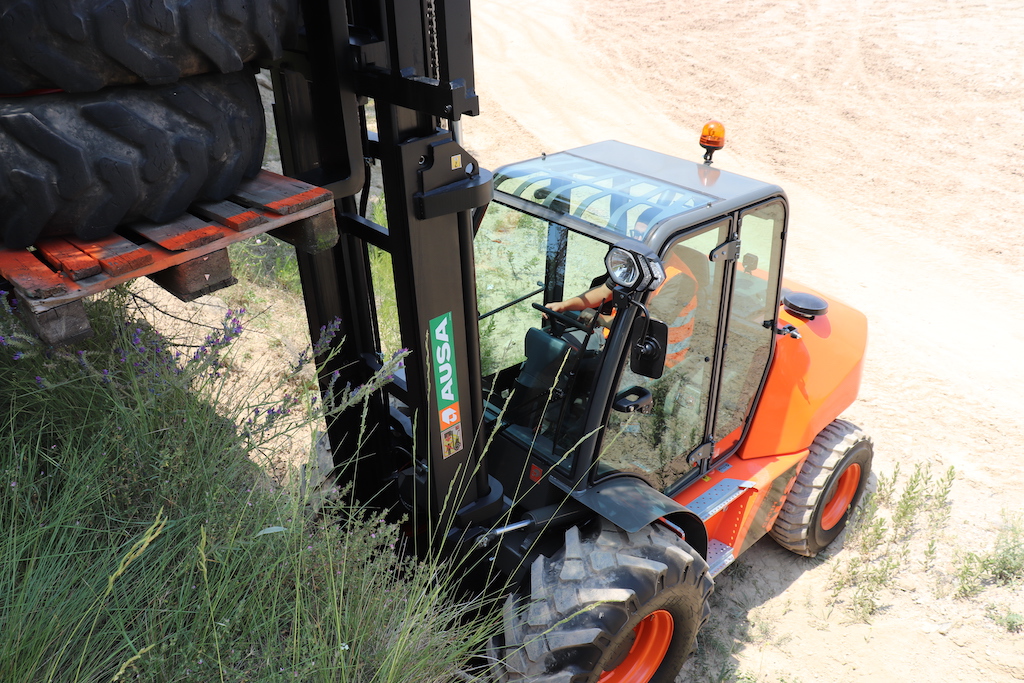 All-terrain Forklifts
After launching the C251H and C351H all-terrain forklifts – with 2,500 kg and 3,500 kg payloads respectively – Ausa is continuing to update all of its models. The highest payload 5,000 kg C501H, for instance, features a digital screen on the dashboard, allowing the driver access to vital machine information.

Whilst safety and emissions have been two of the key drivers of machine development in recent times, the Spanish manufacturer is striving to provide its end users with more information than ever before about the status of their equipment, as Juan reveals. “With the self-diagnosis functionality we have built into our machines if there is problem, an operator can activate the service mode on their display, and then communicate a specific error code to technicians. As a result, downtime is reduced, and the operational longevity of the machine is increased.” As with the other new arrivals efficiency is another strength, with ECO Mode, Smart Stop and the Hill Holder system all in evidence.