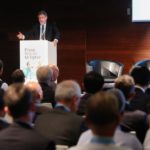 The bi-annual CECE Summit on 16th and 17th October again gathered over 170 attendees of business-leaders, EU decision-makers, partner organisations and journalists to discuss the most relevant challenges of economic, environmental and social sustainability in today’s digital construction industry.

In his welcome speech Enrico Prandini, CECE President, focussed on the social and environmental impact of digitalisation and sustainability and the need of a shift in mindset of customers, contractors and manufacturers. “We all have to create the conditions for us and for the future generations, so we can live in a Europe whose environment is protected. To ensure the economic growth and social stability, a sustainable approach towards construction is needed. We can only achieve this by actively digitising and optimising work processes in our industry. It is therefore our urgent request to the European Commission and its institutions to accompany this transformation in a smart way, by allowing innovation and refrain from too much regulation that could hinder the digital transformation”, said Prandini.

Emmanuelle Maire, Head of Unit “Sustainable Production, Products & Consumption”, DG Environment, European Commission made clear that construction is a key economic sector as far as Ursula von der Leyen’s new Green Deal for Europe is concerned. The construction sector represents 40% of the energy consumption, produces 36% of CO2 emissions, consumes 50% of raw materials, produces 33% of generated waste and needs 33% of used fresh water. Therefore, the European agenda is driven by the circular economy. A European Circular Economy Stakeholder Platform has been installed to team up internationally and to collaborate on the European level.

Paul Surin, Global Lead Built Environment at IBM, in his keynote speech on digitalisation highlighted the importance of traceability and data management. “We can design many things, but we still don’t trace them”. According to a poll he quoted, 42% of the organisations have either none or just a limited digital strategy. A holistic approach is the key to success in the circular economy up to the point where manufacturers need to think about what happens at the end of life of a product. A total transformation of enterprises, operations, products, experiences is necessary, all parties involved need to be connected.

The following panel discussion focussed on digitalisation and collaboration of the construction value chain. Menno de Jonge, Director Digital Construction at Royal BAM Group, Eugenio Quintieri, Secretary General at EBC, Paul Surin, Thilo Juchem, UEPG President and Alfredo Barrios de la Fuente, Engine Technical and Sales Director at Deutz Spain agreed that there is not one solution for all. Specific solutions for specific applications need to be identified and implemented. Above all, the belief in the potential of data management must be embedded in companies’ top management. From the political side, some panellists mentioned the need for more clarity concerning data sharing between the data generators, the owners and the manufacturer.

Tackling more specifically the issue of sustainability, Thilo Juchem presented the Life in Quarries video. Quarries indeed change the landscape fundamentally, but latest research shows that certain rare species can find their way into these areas looking for new space to live.

Dr. Leyla Acaroglu, an award-winning designer, UNEP Champion of the Earth, social scientist and entrepreneur presented herself as a sustainability provocateur. She insisted on the challenge to reconcile the world’s finite resources with humans’ infinite desires. Being conscious of the fact that everything is interconnected, Leyla called on CECE industry to “disrupt itself”, redesign the way they do business and change to system thinking.

On 17th October CECE held its Economic Forum ‘The Road To Conexpo – The Investment & Business Potential for Construction in North America’. Looking at Conexpo 2020, the CEOs of three CECE member companies exchanged on the main successes and challenges of mid-sized European companies entering and expanding the presence in the North-American market. A representative from the US Embassy highlighted the relevance of foreign direct investments in the US and the programs to encourage investments overseas. With a Joint Statement delivered at the end of the Forum, CECE and AEM – the American Association of Equipment Manufacturers – adopted a common stance for free trade and against the escalation of tariffs. The Economic Forum saw the participation of Christophe Hansen, Member of the European Parliament and Coordinator of the European People’s Party Group in the Committee for International Trade, who stressed the relevance of international trade for European economic growth and jobs.

Two insights on trends and tendencies on the construction and infrastructure sector were given by the Catalonia Institute of Construction Technology and Off-Highway Research. Both presentations featured a European and global dimension, with a special focus on the US economy.

In this year’s Technical Forum, the participants had the opportunity to witness policy discussions on two key topics for the construction equipment industries. Firstly, the main issue was the upcoming revision of the Machinery Directive. The audience was updated on the status of the revision and its timeframe. The key stakeholders were involved in the debate, including the European Commission, the European Trade Union Institute (ETUI) representing construction machinery users and the United Kingdom’s Market Surveillance authority representing Member States’ views. CECE took the opportunity to reaffirm its belief that the Machinery Directive is fit for purpose and mentioned the possibility of manufacturers to choose between providing the user’s instructions in a digital format.

In the second part, the focus was on the European Standardisation System and the future machinery standards. Similar to the first panel, the European Commission provided a background information for the discussion, with a presentation about its role in the standardisation process following the rulings of the European Court of Justice. The European Standardisation Organizations CEN and CENELEC, the Confederation of Danish Industry and the French Union de Normalisation de la Mécanique (UNM) were also part of the discussion. CECE highlighted the importance of global standards for our industries and asked for more flexibility from the European Commission’s side. Following a comment from the audience, participants discussed the issues faced during the revision of standard EN 474 on Earth Moving Machinery, which is one of the most relevant standards for the construction sector.

Header image: CECE President Enrico Prandini opens the CECE Summit 2019 by calling on the European industry leaders to move towards sustainability in the construction industry