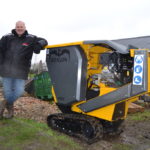 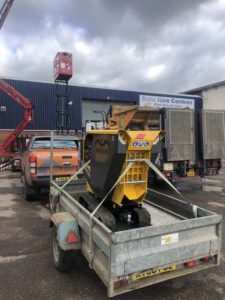 Recycling waste on site has been a staple of large construction projects for some time, but it would be fair to say that those undertaking smaller projects have hitherto lagged behind. We now live in a society where waste is a commodity in its own right, and when builders are removing existing structures, before they erect a new extension or landscape scheme, for instance, they can find themselves very rich in it indeed. It’s not just about keeping Greta happy, of course, because if contractors do the maths on skip hire, and the cost of importing sub-base onto site, then the commercial advantages of producing material in situ starts to make sense.

That was just the scenario for experienced engineer, Jeff Haines when he and his son were removing a brick and concrete outbuilding from his rural Suffolk home, and, just a year on, the result is Dragon Equipment’s CR300 Concrete Crusher. With a wealth of experience earned as the head of the R&D department of a leading wood chipping equipment manufacturer, he had the expertise to quickly assemble a prototype.

“With limited access to our property hiring a larger crusher wasn’t really feasible,” explains Jeff, “but from original drawing to working solution, I was able to get something that would serve our purpose in just two weeks, and it enabled us to get rid of the rest of the building in just one day.”  Jeff then realised that a smaller and more mobile crusher could find a place in the repair, maintenance and improvement sector, and the hirers serving that market, and set about making his initial effort commercially viable. 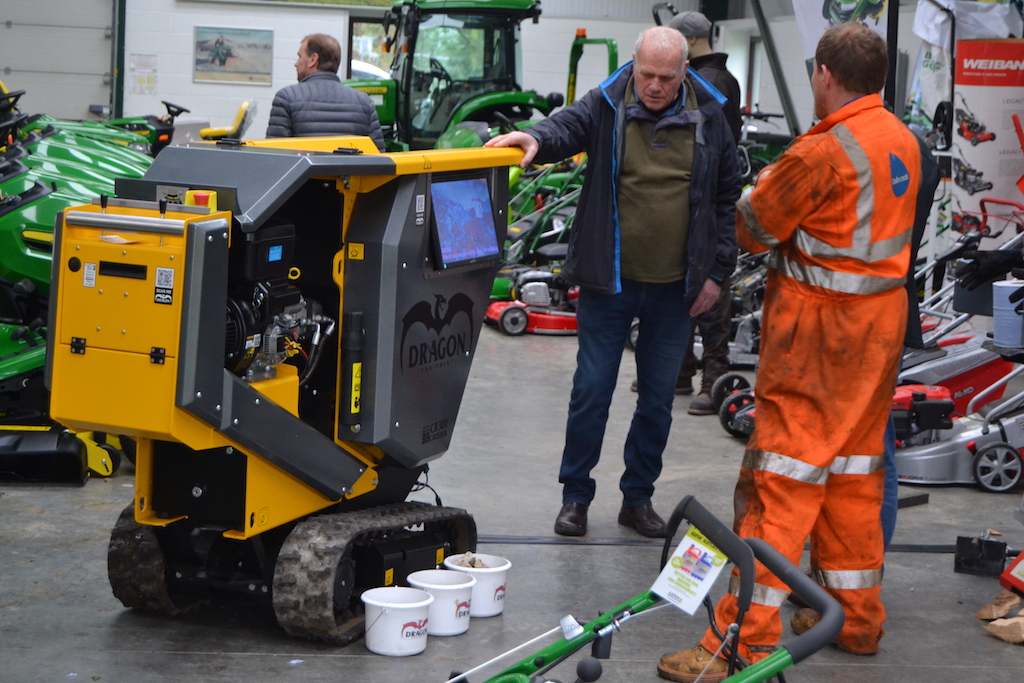 Just a year on, with mark five of that first machine now available to buy, builders can reap the benefits of recycling hardcore on even the smallest of sites.  “With a level of productivity you’d expect from a much larger piece of kit, everyone I’ve shown the CR300 to has been impressed by just what can be achieved from such a small machine,” enthuses Jeff. “The guiding principle of the design has been portability, ease of use and safety. Because it’s a tracked unit, and fits through a standard 700mm doorway, for example, there’s virtually no job that you can’t access. Even if you’re prevented from getting into a back garden directly you can simply lay some tarpaulin down in the house, track it through the front door and out the back, and it’s equally straightforward to get around even tight corners. It’s very easy to use, and is protected by some very clever technology.”

The hire market can be a hard task master for any piece of equipment, but, unusually for such a compact unit, Jeff has equipped the CR300 with protection in the form of a programmable Electronic Control Unit (ECU). Not only will that prevent the machine from being abused through overloading, but it is also possible to dial into it remotely in order to check its status, and diagnose faults. That same function can be used to set up geofences, where an alert will be issued if it is taken out of a prescribed area, a vital security weapon in the wake of increases in on site theft. 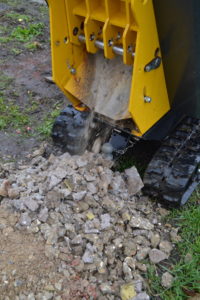 “Landscape gardeners who are pulling up patios and pathways will find a particular use for it,” continues Jeff. “The crushed material can be fed directly from the crusher into a wheelbarrow and then utilised as hardcore on the very same job. With the likes of landfill taxes inflating the cost of skip hire, as well as the outlay for buying and transporting aggregate, it makes good business sense. In fact, I’m talking to a housebuilder who’s interested in buying a crusher, and he reckons he can make his money back on the price of a machine on just one of his developments. If tradesmen want to score points with their clients in terms of their carbon footprint, and keep their customers’ neighbours happy into the bargain, then reducing deliveries to site is also a winner.”

The 300mm wide, 180mm deep jaw is designed to be fed by hand, but can also be supplied with material from a mini digger, where its Hardox 400 steel, and unique (patent-pending) crushing mechanism, will then process up to six tonnes of concrete, brick or roof tile in an hour. It can be set to produce three different sizes of hardcore, and, with an overall weight of just 750kg, can be transported on the back of a medium-sized van, pick up or trailer.

The CR300 is powered by a 14hp, Briggs & Stratton Vanguard 400 petrol engine. In a dusty crushing environment that powertrain benefits from the protection of its own cyclonic air filter, as well that manufacturer’s patented TransportGuard system. Here, the throttle lever is also the fuel off and engine kill in one, a function that prevents a common problem with machinery powered with some engines of this spec.

Hire companies in particular have reported that it has become common for an operator to shut an engine down, but neglect to turn the fuel off. When the unit is being transported from site to site, the float bowl in the carburettor pumps fuel into the engine, which then dilutes the oil, ultimately resulting in rapid engine wear.

Recognising the potential of the machine with its customer base, Suffolk-based Dale Hire was one of the first to invest Jeff’s invention. “We have had very positive early interest since taking delivery of the CR300 Crusher,” reveals Gordon Rogers from Dale Hire. “We’ve been demonstrating it too our customers with some particularly large and dense blocks and getting some excellent responses, which can only be positive for future hires.” Indeed, with interest from both hirers and contractors alike, Jeff Haines is now hoping that this really will be the year of the Dragon.