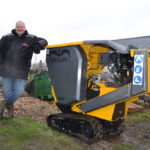 A number of new additions are now under the Dragon Equipment wing.

It was in 2019 that Jeff Haines (pictured) realised that a smaller more mobile crusher could be a productive recycling solution for contractors, particularly on more compact sites, and set about designing just such a machine. The result is the CR300 Compact Crusher, a unit that combines dimensions that will fit through a 700mm doorway, and a crushing capacity of up to six tonnes of concrete, brick or roof tile per hour. That power and portability is partnered with some clever electronics that protects the device from misuse, making it compatible with the rental market into the bargain. Since then Jeff has been busy developing the concept still further and there has been some interesting new developments.

“We were approached by a customer who was involved in supplying long reach excavators to the demolition industry,” explains the engineering brains behind the CR300 range. “He put it to me that there could be scope for removing the crusher head and adding a high-pressure water pump and transforming it into a dust suppression unit. Dust cannons are, of course, nothing new but there is nothing available at the size of the DS110. More importantly, our machine is built on all-terrain tracks and controlled fully by remote control, which has obvious advantages in enhancing the safety characteristics on the work site. The excavator operator is provided with the controls, and can, therefore, position the unit exactly where they want it without leaving the safety of the cab.

Utilising the same format track platform as the CR300 crusher, the DS110 features an adjustable flow rate, delivering up to 29litres per minute of high pressurised water vapour to a distance of up to 23m, but there’s also brains as well as brawn at work in this little machine. The directions of the water jet itself can be adjusted, again by remote control, and when required recorded through the innovative “teach” function. Those recorded movements are then repeated automatically where necessary to allow the operator to concentrate on their job of taking down the structure. It is powered by a fuel efficient Hatz 1B50 air cooled single-cylinder 4-stroke diesel engine, that’s certified to EPA Tier IV final and EU Stage V.

“You can turn up on site, track it out of the van or off a trailer using the remote control, and put it exactly where you need it,” concludes Jeff, “and all that by a single operator.” 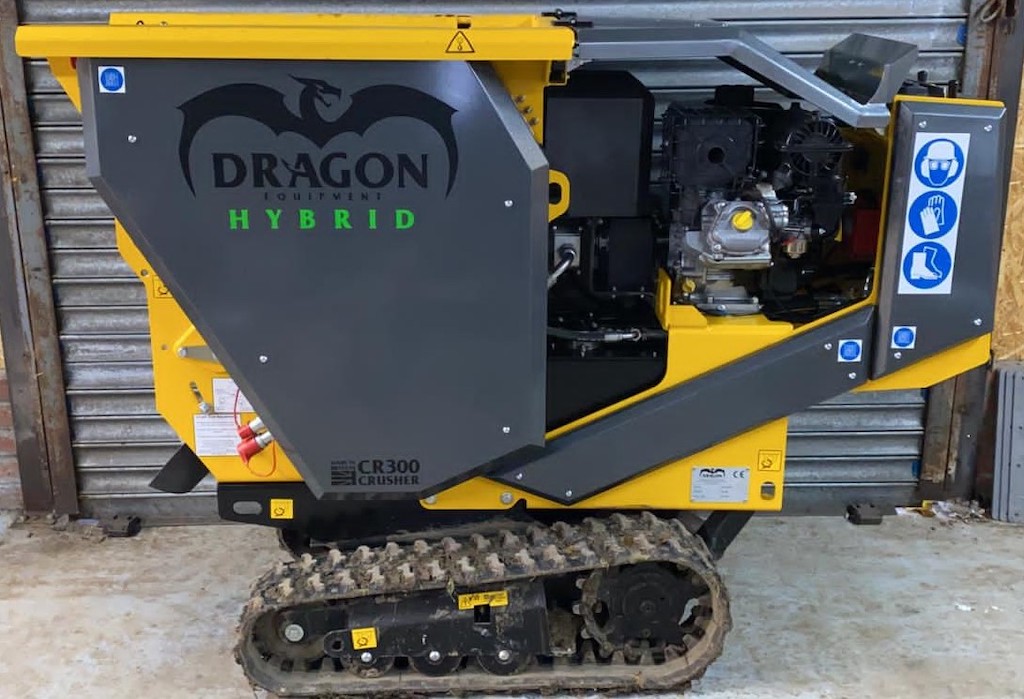 Hybrid Crusher
The DS110 is not the only new product on the Dragon Equipment portfolio because Jeff’s company has become the first plant manufacturer to launch a compact hybrid crusher. Bringing together the same principles of power, durability and ease of use as the original, the jaws of the CR300H are capable of crushing up to 7 tonnes an hour into reusable hardcore.

Built entirely in the UK, this hybrid unit weighs under 780kgs and, with a single lifting point and multiple tie-down points, can be easily transported in the back of a van, a trailer or a 4×4. Like the CR300 its 700mm width makes it the perfect tool for those jobs with difficult and narrow access, or where access is through an existing building. Given that it can track entirely on battery power no hazardous fumes are emitted, and it’s even safe to take through a residential property.

Offering more power, better fuel efficiency and lower emissions under high load conditions, the CR300H uses the same Vanguard 400 engine as its petrol-powered counterpart. Combined with a 15kW E-Machine and lithium-ion battery – and some innovative programming on the engine control unit (ECU) – the right source and amount of power is utilised at all times.

The hybrid technology dramatically reduces the emissions and noise produced, as well as fuel consumption. Making it compatible with jobs in more confined locations. Air and noise pollution can be a real concern, especially for jobs in built-up areas, or those near schools and hospitals. The built-in dust suppression system also helps to alleviate these air borne issues.