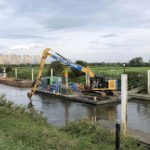 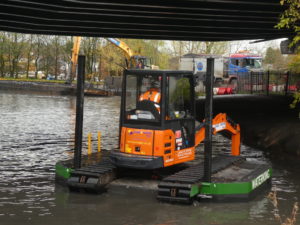 When it comes to some of the vital flood alleviation assignments on which Land & Water excavators are engaged it would take more than a pandemic to stop them in their tracks. “Our machines have still been out cutting and weed clearing rivers,” explains company director, Richard Maclean,“because if you don’t then the flood risk is increased, and by early summer we were back to around 80 per cent capacity.” Indeed, given the projects that his company undertakes, both as a hirer and contractor, problem solving is as routine as the changing of the tides.

Plant Hire
Operating where land meets water is to be confronted with inherently challenging terrain on a daily basis. It demands not just a comprehensive understanding of the tools of your trade, but how they will interact with the natural world.That’s a level of expertise that Land & Water has developed over many years – and has the equipment to prove it. The current business is actually formed of two separate divisions.

When the original civil and marine engineering business began to expand it was joined by a plant hire firm that supplies the long-reach excavators, and amphibious diggers that are essential for the commission of its waterside work, with the rental arm supplying not only its sister company, but external contractors across the marine, civil engineering and quarrying sectors.

One of Land & Water’s founders, Richard Melhuish, was, in fact, an early pioneer of the first long reach hydraulic units, originally running a Hymac 580C and 580BT Waterway on the fleet. It is a tradition that the present Directors including, Richard and his brother James Maclean, have continued. Indeed, from their own roots running a tree clearing business with just one JCB 3C, they can now command a prodigious armada of floating and land-based equipment.The very first project undertaken as Land & Water – over a quarter of a century ago now – was a canal dredging job for what was then British Waterways, and it is a specialisation that the company continues to this day.

Main Contractor
Today, Land & Water Services are the main dredging contractor for Canal & River Trust, looking after over 2,000 miles of canals nationwide.“Our work is exactly as the company name describes,” explains Richard, “at the interface between land and water. You’ll find us working in tidal areas, dredging ports, harbours, rivers and canals, or in flood alleviation.We work as a contractor for the Environment Agency nationally, and on a specialist sub-contracting basis for a whole range of construction companies.”

It is Land & Water Plant that supplies the right tools for these jobs, including Europe’s largest fleet of over 50 long reach excavators, ranging from 2 1⁄2– to 80 tonne, predominately from JCB, Komatsu, Caterpillar and Hitachi.There are more than 10 tugs in the fleet, as well as forty barges – of sizes to suit different waterways.A significant part of the hirer’s portfolio is also on a design and build basis, producing bespoke boats, barges and pontoons for its contracting arm’s specific projects. 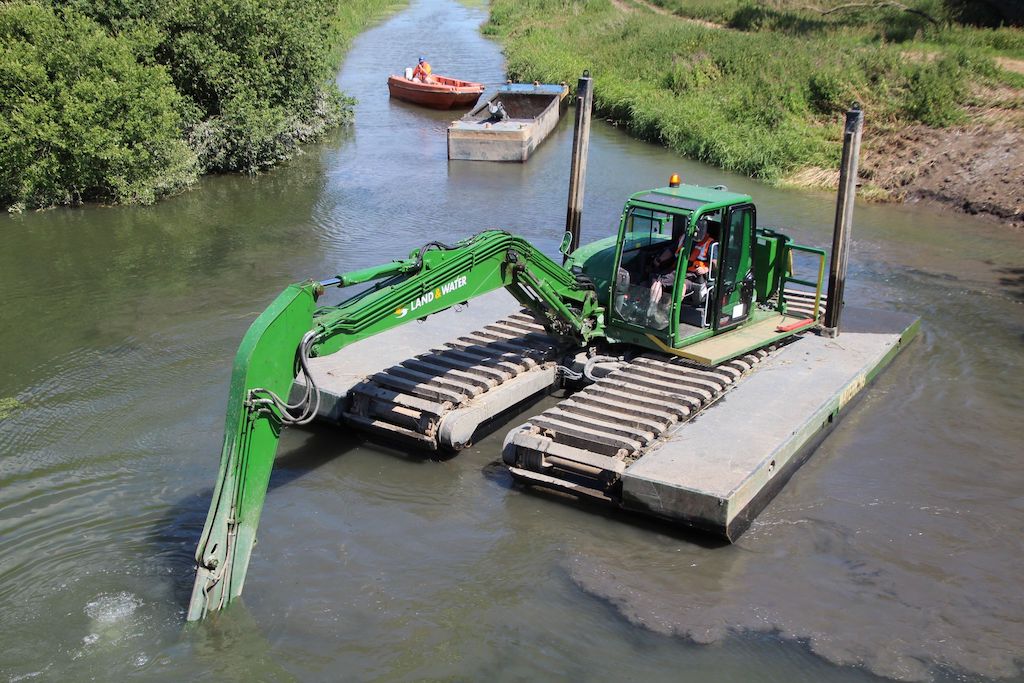 Converted narrow boats serve as floating welfare units, including all the canteen, toilet and washing facilities that workers would be familiar with on dry land. Excavators are slew ring mounted on barges for dredging, and Land & Water has designed a 14ft wide pontoon that can accommodate an 8 tonne digger, but can be more conveniently transported by road in two 7ft pieces. Land & Water has invested nearly £1million in 2020 in the latest road transportable pontoons to help the company set the standards in modular pontoon rental.

“At every point the guiding principle is to make use of standard equipment where we can. It then naturally follows that we’ll deliver a cost-effective solution for our clients in the process.There’s no point developing a purpose-built dredger that’s only got one job when you can deploy a pontoon that can accommodate an excavator on any number of sites.These simple methods mean the Canal and RiverTrust can reduce their dredging costs, and we can relocate equipment at will.”

In its external market the rental business is a framework supplier for the Environment Agency, with all the specialist machinery they hire coming through Land & Water Plant. “All of the equipment we supply to EA has to be made by the OEM (original equipment manufacturer), rather than modified by a third party, and that includes our long reach excavators. Indeed, simply because the manufacturers don’t make them, the only long reach units we have that are not OEM supplied on our fleet are the very smallest and largest units, and these have been traditionally sourced from the OEM using Kocurek as a specialist fabricator.The 14-specialist river- and canal-going weed cutting boats are also regularly in service with the Environment Agency, ten of which are amphibious and can operate in or out of the water.There’s a range of amphibious excavators, which we equip with additional tanks and pontoons to the side to increase their stability and allow them to work in deeper water.” 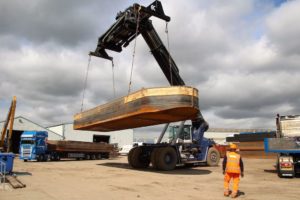 Advanced Machines
Regularly working in the likes of Sites of Special Scientific Interest (SSSI) makes adopting the latest technologies a prerequisite, and Land & Water has often led where others have followed.“There’s a lot of noise currently being made in the market about the benefits of machine control systems, but we were using GPS to trim batters underwater back in the late 1990s,” enthuses Richard.“When excavators are moving up and down with the tide twice a day – and levels are constantly shifting – or you need to ensure the accuracy of dredging, it’s actually the only option, and GPS has been routine for us for many years.”

Similarly, Construction Plant News recently reported on Land & Water’s highly successful trial of Crown Oil’s Hydro-treated Vegetable Oil (HVO) as a fuel, and that’s by no means the first time the company has adopted technologies that looks to lighten the tread of its carbon footprint and environmental impact. Bio oils were first trialled on its machines over 15 years ago, and the company has been running biodegradable Panolin products almost exclusively on its fleet for over 10 years now.

“It’s not just about the machines, of course, because our operators, and maintenance team are deserving of special mention. Given that one piece of equipment is often directly relying on another to continue to function, supporting our products in the field takes on a special significance, because if one breaks down then the whole process might come to a halt. It’s the yard and workshop in Birmingham, and our network of mobile engineers, that are the beating heart of the business. It is here that a 45t capacity Kalmar Reach stacker loads and unloads barges and pontoons to be made ready for repair, and machines are set up for the individual requirements of our customers.”

“Often customers ring with an issue and look to us for a solution,” concludes Richard. “They may not know what equipment they need – but they know the problem. Our experienced hire team need to understand their situation, so we can offer the most efficient answer, and if that involves going to see the project first-hand then that’s what we’ll do. I see it as our responsibility, and I believe it’s one of the things that makes us different.” 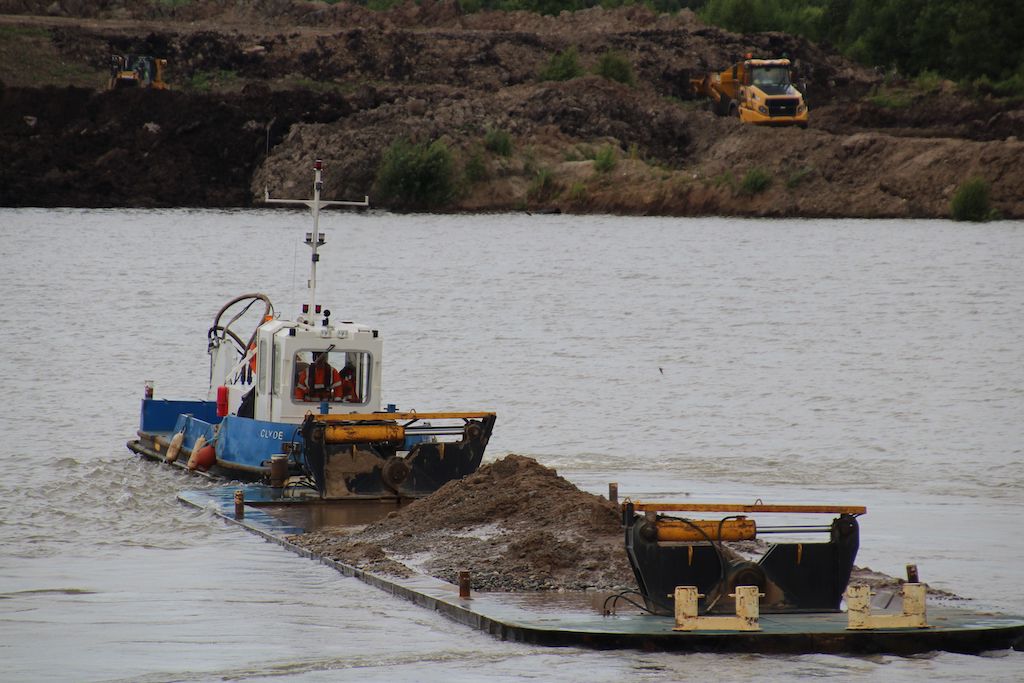 Project Focus
Whilst much of its plant might be unfamiliar to mainstream contractors, the mission for Land & Water is for its machines to work seamlessly together – in any environment – a philosophy which is underpinned by the experience of a quarry operator in Lancashire, as Richard explains.

“The customer’s site is a sand & gravel quarry.The mineral lies under peat, is almost all below the water table, and has been excavated as far as possible (from water level to about 6m deep) by normal long reach.We are now on site taking the material down to around 10m deep by first using a Hitachi ZX 470 20m long reach, and then a ZX 490 23m long reach.This gives the client more production from the same area than expected, and saves the expensive job of removing overburden and opening the quarry up more. 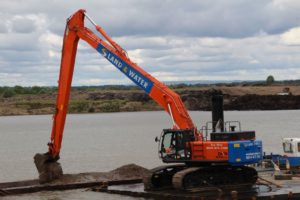 “The excavator sits on a road transportable spud pontoon and the operator loads 100 tonnes at a time into split barges which, when full, are pushed by our own design 250 HP River Class Tug to a wharf area, where the barge splits and drops its load (of 100t in less than a minute) in the wharf area – a process which washes the sand further – before it is excavated out of the water to stockpile for 24 hrs by an 18m Komatsu PC360.The wharf area is located near to the quarry wash plant, so there is no need for dump trucks to haul any of the material – it can all be done with a loading shovel that’s already in use on site.

“We have never caused the quarry a day’s downtime due to lost production.The recent upgrade from 470 to 490 (longer reach and deeper dig depth) could ensure another 12-24 months production.The floating solution also allows the customer to choose what material we produce and when – some of the site has larger stone and some finer sand – and knowing which material is where means we can move the pontoon to the required area at a moment’s notice.