With the relentless charge towards electric powertrains liquid fuels have often been characterised as a problem we need to overcome, when in fact they could well be part of the solution. As the prime suspect of an air quality crisis in our cities, diesel has been thoroughly demonised in the popular imagination, but that is a position that overlooks the versatility of the engine itself. One of Rudolf Diesel’s original prototypes actually ran on peanut oil, for instance, and it is still the case that the machine that has done so much to drive the modern world forward is far from dependent on crude oil.

Biofuels have equally been with us for many years, with their limitations now well documented, but they are not the only alternative, as Simon Lawford, Technical Sales Manager at Crown Oil explains. “First generation bio diesels suffered from a poor reputation in the marketplace. The ester link in these solutions would react with water and oxygen, producing impurities and bacteria. As a result, they suffered from a limited shelf life, blocked filters and were unproductive in cold temperatures. By contrast, HVO is a 100 per cent hydro-carbon fuel with a paraffinic structure, which eliminates these issues.”

So, what is Hydrotreated Vegetable Oil? Or HVO, as it is more commonly termed? Crude oil is so intrinsic to our way 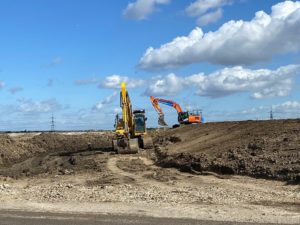 of life, that what it is actually made of can be easily overlooked. Of course, the carbon content of that material is derived from organic matter on which time and pressure has acted over many millions of years. Derived from almost any vegetable matter, the production process of HVO shortens that timeframe to a matter of hours and days, whilst still maintaining that hydro-carbon structure. Fleet managers can, as a consequence, take comfort, because it is actually much closer in structure and chemistry to a diesel than bio alternatives.

Essentially, what the engine experiences is a very pure – but ultimately very familiar – hydro-carbon, with no difference whatsoever to the operability of the equipment. The real win, however, is in a dramatically reduced carbon footprint and level of emissions. In short, this is a plant-based fuel, treated with hydrogen, that does not rely on hydrocarbons plundered from beneath the earth – it is quite literally “grown”.

“It’s ultimately about putting back in what you take out,” continues Simon. “The production process of HVO, including growing the crop and making the fuel, is within a sustainability loop of one year. That means that, when the plant material is growing, it has effectively sequestered the CO2 that has been released from the tailpipe emissions. In practice that means a reduction in greenhouse gas CO2 of more than 90 per cent when compared to diesel.”

Not only that, HVO is inherently much cleaner than a crude oil-based fuel. The latter is often a mix of what the producer has available at the time, which can include not only paraffinic, but naphthenic and aromatic carbons, all of which will burn at different rates. By contrast, Hydrotreated Vegetable Oil is a purely paraffinic compound, which burns more efficiently, thereby reducing particulate matter emissions by as much as 70 per cent. 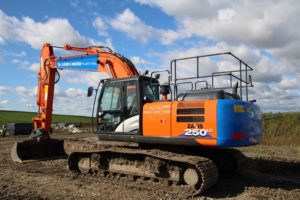 Moveover, because HVO’s cetane number is more than twice that of standard diesel, it will ignite much earlier in the cylinder, and at a lower temperature. NOx emissions are simply a by-product of the burning of nitrogen, and the higher the temperature the more will be burned. As a result, by reducing the cylinder temperature, HVO can reduce harmful NOx emissions from the exhaust by up to 20 per cent.

The advantages don’t stop there, however, because emissions are not the only performance criteria in which HVO can outmatch its diesel counterpart. “One of the problems with standard diesels is that legislation now demands it includes at least 9.75 per cent bio-content. Given that the specification for EN590 Diesel allows for a maximum of 7 per cent Fatty Acid Methyl Ester (FAME) to be added, producers are meeting bio-mandates by adding various combinations of biodiesel such as FAME and double counted UCOMe, (used cooking oil methyl ester) to fossil diesel. It is true that Non-Road Mobile Machinery (NRMM) can be used without FAME and or UCOMe, but it is becoming increasingly difficult to source, and unfortunately for the end user FAME and UCOMe has the effect of introducing some of the detrimental qualities of biofuel into the tanks of construction plant. Water ingress and oxidation can reduce its lifespan to less than six months, for example, but HVO, which is not required to include any additional biocontent, can last up to ten years.”

A Surrey-based contractor with a national reach has experienced all these benefits and more. Where land and water meet is where you will find these coastal and waterway management specialists, undertaking some of the nation’s most vital repair and infrastructure projects. Land & Water holds a ten-year framework with the Canal & River Trust, as well as five frameworks with the Environment Agency. With climate change has come and renewed focus on flood defence, and the contractor has been at the vanguard in the battle to protect communities across the country, whilst a diverse portfolio of works also extends to marina buildings, ports and harbour work.

Add to that a prodigiously equipped plant hire business, including Europe’s largest fleet of long-reach excavators – together with a 50 per cent joint venture interest with Flannery Plant Hire for National Track Dumper Hire – and what emerges is a business with a level of expertise which is unparalleled in its field, and one which is well placed to assess the benefits of HVO. It is, however, the contractors’ remediation business where Crown Oil’s fuel has been utilised. In a highly successful trial on a major reclamation project, Land & Water was tasked with transforming a former lagoon in Rainham into a wildlife habitat.

Given that the company is often engaged at environmentally sensitive locations, or Sites of Special Scientific Interest, 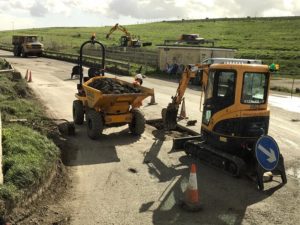 (SSSI) it’s not surprising that Land & Water is no stranger to making use of alternative liquid fuels, but has found the use of hydrotreated vegetable oil particularly beneficial. “We actually undertook the first tests of bio-hydraulic oils with the Environment Agency more than ten years ago,” explains CEO, James Maclean, “and have experimented with various biodegradable fuels over the years. Like many others, we have found traditional bio-fuels problematic in the past, which is why the hydrocarbon composition of HVO appealed. The most important point, of course, is that we don’t have to make any modifications to our excavators and earthmoving plant. At the same time we can still achieve a 90 per cent reduction in a machine’s carbon footprint in operation, and significant reductions in NOx and particulate matter emissions. With those kind of environmental credentials, it presents a very compelling case.”

Of course, for a company with such an extensive programme of works, going green can’t be at the expense of performance, and this is where HVO really appeals for the end user, as James explains: “HVO is a far more stable product than any bio fuel and has a greatly extended shelf life, nor will it suffer from the bacterial growths and bugs of these or modern diesel. Over the course of our trial we’ve probably put over 10,000 litres through one machine, and its performance has been fantastic. Storage and handling is identical to diesel, and the driver simply won’t tell the difference. At Rainham the machines that have been running with HVO have been on twenty-four hour shifts for two months now, so if we were going to find any problems we certainly would have done, and there’s been no issues whatsoever. We’ve had the likes of TFL, and our own customers come down to have a look at it, and we’re now offering it in our tenders as a low carbon alternative.”

Indeed, for any contractor looking to demonstrate their environmental credentials to their clients HVO Fuel has an obvious attraction and, most importantly, with no changes to the existing diesel engines on a plant operators’ fleet whatsoever, it represents an easy win. “With HVO there’s no need to transition to hybrid or electric technologies or install after treatment technologies onto equipment. It’s so flexible there’s no reason why we couldn’t run our entire fleet on the fuel, even hybrid machinery, and, if we want it, Crown Oil have given us an undertaking that they can meet that supply.”

At present, most electric machinery remains prodigiously expensive, whilst retrofitting the likes of Selective Catalytic Reduction (SCR) systems can also be costly. Although far from a new concept, given that everything from a 6kW generator to a 120 tonne excavator can be powered by HVO, it would be fair to say that its full potential is yet to be exploited. With the relentless expansion of ultra low emissions, ever stringent controls on what emerges from the exhaust, and the demands on contractors to prove their sustainability at every stage of a project, Crown Oil is adamant that this is an alternative that the plant sector should be seriously considering. “HVO provides choices for the fleet manager, in terms of how they can make the abatements now necessary to work on many sites, and specifically in urban developments,” concludes Simon Lawford of Crown Oil. “With the end of the red diesel tax break now in sight, we would anticipate more contractors and plant hirers will be investigate other liquid fuels. These are solutions that we still need, and are more than capable on stepping up to the environmental challenges of the future.”