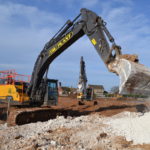 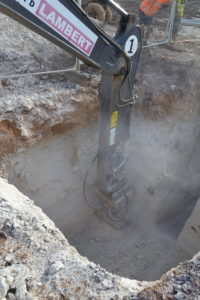 If you ever wanted proof that the building industry is a problem solving business then you need look no further than a housebuilding site in the elegant Norfolk resort of Hunstanton. Tasked with a full groundworks package for a site of over one hundred properties from Bennett Homes, the DAB Group team were installing deep foul drainage channels some 6metres deep. Through the first two metres of excavation they encountered the kind of silt and clay that is typical of much of the east and south of England. Delve deeper, however, and the bucket’s progress was blocked by some of the hardest ground conditions the experienced site personnel had ever encountered.

Faced with a layer of flint-infested chalk as hard as granite, the power of a 30 tonne Volvo EC380EL was brought to bear – brandishing a reinforced, quarry spec digging bucket into the bargain – but still to no avail. It is here that the contractor turned to BPH, a supplier with whom they had already formed their very own highly productive attachment over many years – and a company that has the kind of extensive range that makes a solution inevitable. A breaker was first tried but, rather than splitting up the material so it could be removed, it only succeeded in punching holes in the ground, whilst an auger was rejected as a potential answer for much the same reason.

When you’re in a hard place it’s time to call in the rock – or the Prodem PRW Rock Wheel to be precise. Launched late last year, this multi-purpose excavator tool is a relatively new addition to the BPH Attachments portfolio, and is part of a Prodem range that has quickly established a reputation in the industry for performance and durability. When a 22 tonne Volvo EC220EL is armed with this distinctively purple attachment, the Rock Wheel’s patented High Displacement Hydraulic Piston Motor is able to power the unit through 150mm deep sections of that hardened chalk, allowing its bigger 30 tonne sibling to then move in and scoop up the material.

“We’ve been using Rock Wheel on this job for three months now and we haven’t had to change any teeth yet,” enthuses operator Nobby Alton. “Given that this is just about the hardest material we’ve ever needed to excavate on a job that’s a testament to it toughness.” As DAB’s groundworkers have discovered, thanks to the feed line filters and dust-proof mechanical seals protecting the motor, the unit is virtually maintenance-free, and all wear parts are easily replaceable. Not only that, but the Rock Wheel actually has a multitude of uses, from trenching to profiling rock and concrete walls. It will chew through medium to hard rock in tunnelling, quarrying and demolition applications, whilst it can equally be utilised in dredging and underwater jobs.

It might be a device reminiscent of medieval torture, but it can also be wielded with a lighter touch. Indeed, its makers would recommend the Rock Wheel for finishing operations that require high precision and minimum disturbance, or on sites where noise and vibration are a consideration. Another attribute being ably demonstrated on the Hunstanton project is its manoeuvrability in tight spaces. Deep or narrow trenches are equally accessible, whilst the demands of the circular economy are answered in that milled material can be easily reused on site.

DAB were making use of the Rockwheel on a 22 tonne Volvo but the range of suitable excavators ranges from 3 – 70 tonnes. The duel hose positioning allows for 90° manual rotation as standard, whilst hydraulic rotation is an option. There are various drum and teeth options to suit your application, and the design allows for the quick and efficient discharge of material.

“Because the foul drainage here is 6metres down in a relatively confined space, the Prodem Rock wheel was really the only solution,” concludes site engineer, Malcolm Hine. Indeed, this is one piece of equipment that has quite literally got this contractor out of a hole.

0 0 0 0
Previous : GLAD about lifting – spread the word
Next : IR35 delay provides ‘relief’ to the labour supply sector at ‘critical’ time