At first sight it would seem to be an equation that would be difficult to resolve. Ever more stringent global emissions standards, combined with changing jobsites, has demanded diesel engines that are cleaner, smaller, and lighter – and yet more powerful. With its latest Stage V units, however, that is 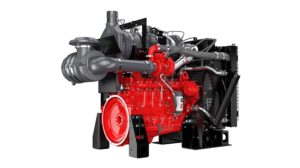 exactly what Cummins is now supplying, but those are not the only advances that the manufacturer is pioneering.

When it comes to its chosen power provider, many original equipment manufacturers (OEMs) are looking for not just a base engine but a complete package, with the likes of exhaust aftertreatment, radiator and cooling system, plus auxiliaries such as mounting feet, hoses and an air cleaner all included. It is a solution that will save that manufacturer considerable engineering resources and is certainly the state of the market in the crushing and screening sector. Now, with the launch of its new B6.7 and L9 Performance Series Power Units, that is what Cummins is offering.

With these power unit packages, 60 per cent of the content is pre-approved, as Steve Nendick, Cummins Marketing Communications Director – Global Off-Highway, explains: “When we supply a customer we’re not just handing over the engine. Instead, we’re partnering with their engineering team to ensure that the unit is installed correctly, with all hydraulics, cooling and fans properly in place. We’re offering engines in the 75 – 503kW (100 – 675hp) in this ready-made, drop-in format, in an initiative that will reassure all parties that the stated warranties will be met.”

Another addition to the Cummins family of innovations, which has also debuted in the quarrying market, is the single and dual rear-engine power take-offs (REPTO). Cummins engines are already 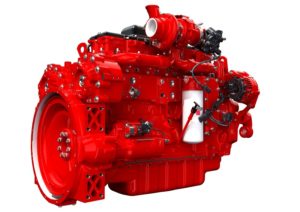 equipped with a standard PTO capability, which allows for the running of the likes of hydraulic pumps. The REPTO is a solution which finds particular favour in quarrying, on crushers and screeners, for instance, where conveyors will be needed to run from the machines. The new Cummins engine sees a dual REPTO integrated into the flywheel housing, which means various pumps can run from it without impacting on the engine power, or the need to buy and install additional aftermarket systems. In short, with the dual REPTO delivering a drive capability of 560 Nm, but with only 100kg of additional weight, you can run much more from a single engine and deliver a far more cost effective operation in the process.

Anaconda are one of the first manufacturers to take the new power units on its new J12 and I12 Jaw Crushers, powered by the Cummins L9. What that crusher champions is an interchangeable chamber concept that can accommodate either a jaw or impact crusher, providing a two machine option for a fraction of the cost. For the contractor, who needs to move machines from place to place, and will be processing different materials at those locations, having that versatility is invaluable.

The Cummins engine driving that innovation continues in that spirit, with a Stage V Performance 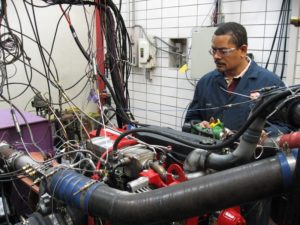 Series engine, which is compliant in both North America and Europe, and is pushing emissions levels down to near zero. Indeed, the Cummins Stage V product has seen significant improvements in its exhaust after-treatment capability. Through its own specialist division in the field – Cummins Emissions Solutions – the manufacturer had designed out Exhaust Gas Recirculation (EGR) in its Stage V solutions, instead utilising only Selective Catalytic Reduction (SCR) and Diesel Particulate Filters (DPF). The greater efficiencies that can now be accrued from an AdBlue-based, SCR system in eliminating NOx emissions is what makes that possible and, because EGR requires additional infrastructure – including cooling systems – that makes these engines more compact, lighter, less complex, and easier to fit into the established footprint of a machine.

At the same time, because used exhaust gas is not be put back into the air intake, the power and torque can be increased. “We’ve done some significant work on our four cylinder products, the 3.8, 4.5 and 6.7 litre, in just those terms,” explains Steven. “If you take the last of those, for instance, there is a 30 per cent increase in torque without EGR. What that means in practice is that our customer can increase the capability of the machine, or replace a larger engine with a smaller one, without any detriment performance.” Indeed, as an example of the latter, JCB has just downsized its wheel loaders from a rival manufacturer’s 7.7litre engine to the Cummins 6.7, with no impact on machine capability, and improvements of running costs and fuel into the bargain.

In summary, therefore, the Stage V engine is easier to install, more fuel efficient, with greater power and torque, but maintenance considerations have not been neglected either.
Thanks to the development of a new oil standard with partner Valvoline, which improves upon the existing CK-4 industry standard, oil change intervals of up to a 1,000 hours are now possible.

For further information on the Cummins Performance Series click here

WORKSITE OF THE FUTURE
The Performance Series is part of a wider culture of innovation at Cummins that is bringing together a full suite of technologies. The ‘Cummins worksite of the future’ encompasses clean diesel, hybrid, electric and natural gas solutions – all areas of active research and development for a manufacturer that can already point to a 100-year heritage. It is that mix of complementing powertrains that contractors and hirers will be utilising on tomorrow’s sites and the company has produced a video to explain how that will be realised.