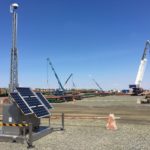 A new star was born in the security sector in 2011, when Sunstone first set itself the task specialising in security systems installations, particularly CCTV, and from those beginnings the company would rise to service the market in more niche applications. “The hard-to-achieve wireless, point-to-point surveillance has become our area of expertise,” declares company founder and CEO, Paul Schelhaas, “and the business has grown year on year in that field. In any setting where there is a problem supplying power by conventional means that’s where we can step in, and provide both surveillance and wireless communications.”

What emerged from consultation with some of the security expert’s earliest construction clients was a demand for solar powered and renewable units, and as a result Paul and his team set up delivering its own prototype solutions. “At that time, where Sunstone diverged from our competition was in the design and build of hardware that was specific to the application, particularly in terms of power outputs” continues Paul. “Some of the earliest solar solutions where effectively a collection of incompatible components, and simply couldn’t generate enough energy to keep the camera operational all year round, which was clearly a fundamental flaw.”

The Sunstone approach was to build a frame that could accommodate more solar panels, without creating wind loading issues. In addition, the manufacturer’s technical experts developed their own hardware, and sourced components that would draw the minimum amount of power for the application – and if those components didn’t exist then they set about building them to their own specification.

There are mandatory pieces of equipment that solar powered units will require in order to operate. Power-point trackers regulate how much power comes into the solar panels, for instance, and these, together with the likes of battery control monitors, need to draw a certain amount of energy in order to function. The problem with many of the existing units on the market was that the components being used were built for major larger installations and were using more power than a small, mobile CCTV unit could spare, especially when that system is required to operate 365 days a year. “On our system all of the hardware that delivers the footage will only draw in the region of 5 – 10 watts, for instance, whereas previously that would be as high as 20 – 30 watts.”

In the years ahead the inherent reliability of Sunstone products would find them a place across a range of sectors, but it was the winning of a large contract in oil and gas, overseeing the construction of a refinery in Kazakhstan, where the technology would really prove its worth. Recalls Paul: “We deployed an initial 20 of our Solar Powered IP Camera Systems as part of a pilot scheme but that very quickly increased to 60. The scale of that project, and the fact that it’s been running for over two years now, has helped us learn so much about the product itself, and how we can refine it for the benefit of our customers, and we’re now in discussions with Chevron about rolling out the same system across the construction of all of its refinery sites worldwide. Given that conditions in that central Asian republic were significantly harsher than in this country, it was a development that very quickly made us realise that we could deploy the same system here in the UK on virtually any construction site.”

One of Sunstone’s earliest UK clients was demolition and remediation contractor, John F Hunt who were tasked with levelling a 26 acre area in Stratford. The site was occupied by a number of sub-contractors, all with their own fleets of equipment in attendance and required round the clock surveillance as a consequence. Sunstone’s bespoke wireless CCTV set up, with infra-red and radar solutions, means cameras can be placed anywhere, and not just where power is available. Not only that but they can be deployed quickly, and monitored remotely. “Whilst physical security personnel were still a feature of the site, the reliance on boots on the ground was greatly reduced,” explains Paul. “Not only is that a cost saving, if there is an unlawful intrusion, it also puts employees out of harm’s way.”

“We can supply whatever solution is required to keep a site secure. If the client wants a specific camera then they can have it, whilst we can also gather and send that footage in any way they like. We can remotely monitor the project itself, for example, or send the data to the customer’s existing security team.”

Because Sunstone’s solution is based on reducing the power load required to run a solar CCTV array, there are always reductions that can be made. The company is currently working with a number of companies on smaller batteries in order to get more into the available space, whilst its R&D department has developed a hydrogen fuel cell system, and it’s not just about CCTV, because a client can also specify broadband, radio extender masts or Wi-Fi networks to the existing masts. Indeed, because Sunstone’s latest solutions feature modular heads, lighting can even be added to the top.

The most recent development in the Sunstone concept is destined to give its solar powered solution a much greater reach. Its smaller footprint Solar IP CCTV Systems is a leasable unit, which can easily be transported in the back of a van and installed by one or two people. There’s no need for any heavy lifting equipment and multiple systems can be transported in in one vehicle. “This is where the solar emerges into the mainstream,” concludes Paul, “because it’s no longer about deployment in locations where power is an issue. We want our set up to be in a position to be able to replace virtually any existing security arrangement and we’re working on the technology to make that happen.”