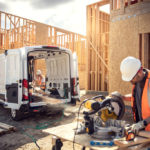 There are still some obvious cons to driving an all-electric van but, thanks to Ford, these could soon be outnumbered by the pros.

It’s not like the mighty Ford to ever be late to the party, so eyebrows were certainly raised when they didn’t immediately jump on the electric van bandwagon like so many of their commercial vehicle competitors. As a serial A lister, with ownership of Britain’s perennial best-selling van – the Transit – you get the distinct impression that for them it was more a case of the old saying: “marry in haste, repent at leisure.” And, of course, now the music has stopped, they have dramatically appeared centre stage with what looks very much like a double act which could top the bill for the foreseeable future.

The launch of any new Transit, and there have been eight upgrades during its almost sixty years of unrivalled success, is always a headline grabber, of course, but few have been as eagerly anticipated as the E version. One would imagine that – given what is at stake for the company globally – the vehicle has been tested and trialled more rigorously than any of its previous incarnations and feedback from businesses across the spectrum has played a key role in delivering a vehicle which will set the benchmark towards complete electrification of the Ford commercial offering within the next decade.

We all know, that right now, the diesel version, in terms of price and range, still makes most sense for many but there will come a time when the talking has to stop and the combustion engine will, well, self-combust! By then of course, the market will have evolved significantly but right now, pound for pound, the E-Transit looks like being a real game changer in terms of appeal to the masses. 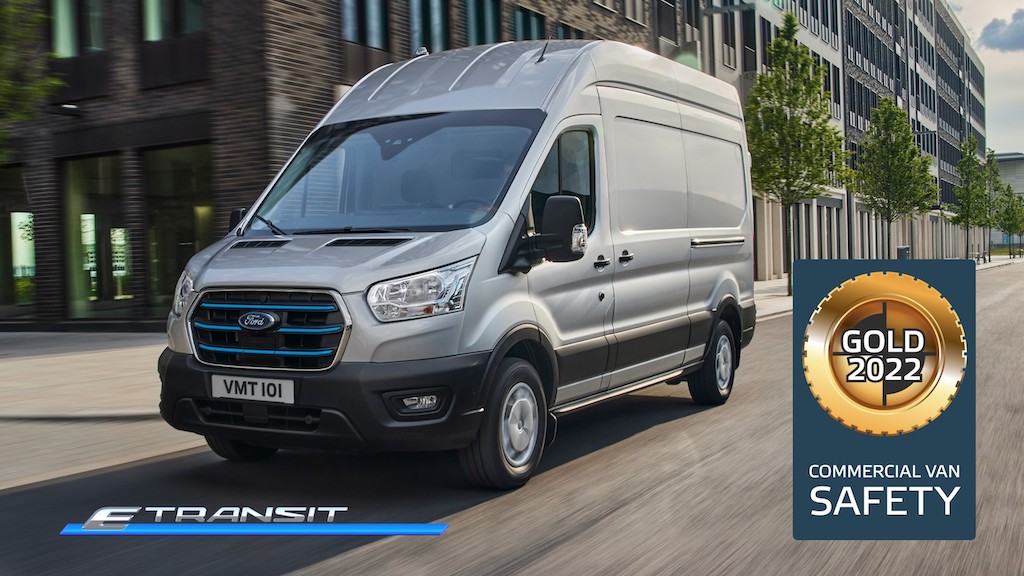 For one thing it is aggressively – and many would say much more realistically – priced with basic models starting at around £47,000 plus VAT. That’s still a considerable investment but one which should very quickly start paying dividends in terms of lower running and overall maintenance costs, which are predicted to be 40 per cent lower than equivalent diesel-powered models. A 68-kWh battery will do around 197 miles and rapid charging can be completed to 80 per cent capacity in just over 30 minutes. Unfortunately, even Ford can’t hide the fact that fully laden in winter with the heater on full blast this will be reduced quite significantly. However, unlike many other electric vehicle manufacturers, they are being up front about this and pretty much guarantee a range north of 100 miles whatever the conditions.

Currently there are 25 models of the E version on offer with multiple lengths and heights, as well as gross vehicle weights from 3.5 to 4.25 tonnes and payloads up to 1,758kg to choose from. Rear wheel configured, there are also three driving modes to select – normal, eco and slippery – and the regenerative braking system is graduated – unlike some vehicles which almost slow to a stop the moment the foot is removed from the accelerator. The ride experience is also enhanced thanks to a cleverly reengineered suspension system to accommodate the drive motor.

One convenient innovation for site workers is the three strategically placed 2.3kW sockets in the cab and cargo area which can be used to power work tools and lighting. Most, importantly, extended use will not drain the battery significantly, an hour’s work using only about three miles of mileage. And rather than a site supervisor ordering a downing of tools, the van itself will flash its lights and honk its horn to make sure there is enough juice to get home.

Behind the wheel, one of the most surprising aspects of the base 180 hp 450Nm engine is just how much power it can generate, considerably more than any diesel transit available, making it extremely quick off the mark and, of course, noticeably quieter. There’s an impressive 12in. touch screen lifted from the electric Mustang which runs a fully integrated Sync 4 multimedia system as standard, as well as heated folding mirrors, quick clear windscreen, cruise control plus a host of the very latest driver assistance aids which have rightly earned the Transit the reputation as one of the best appointed and safest LCV’s around. 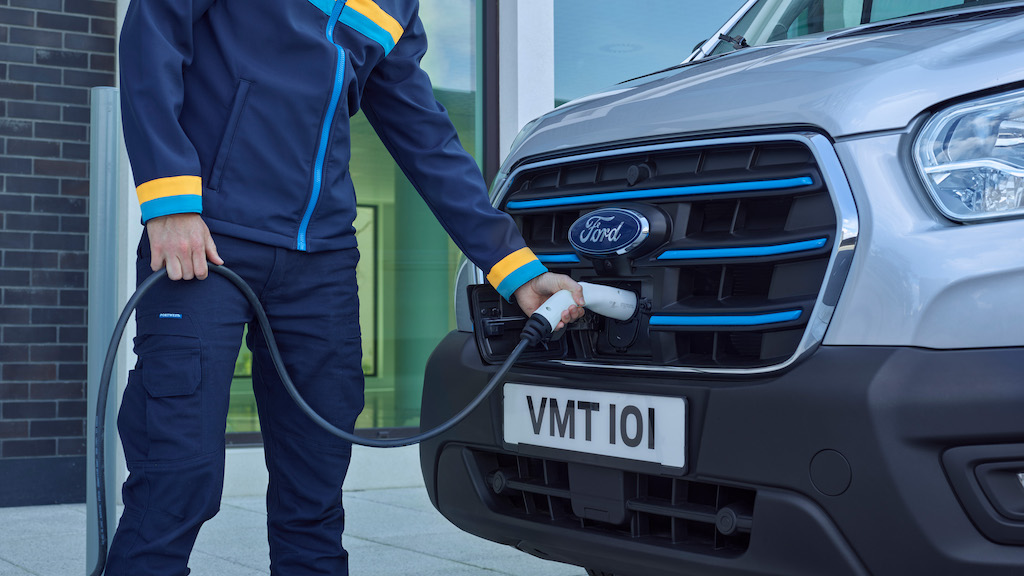 Top marks all round then for the new van, but crucially Ford has also correctly identified that one of the biggest obstacles to going fully electric in the minds of many potential owners is the sheer hassle and anxiety surrounding the actual charging process. We often hear about vehicles being returned to a depot for overnight charging but what about the one-man van owner? The Transit clearly wouldn’t be the iconic preserve of white van man without the army of builders, plumbers, and electricians who after a hard day’s graft park up at home overnight. For these guys and girls Ford, in partnership with British Gas/Centrica, will now install a rapid charging connective wall-box at home and any oversight with regards to plugging in will be met with low charge sound alerts, avoiding the unwelcome possibility of ending up stranded on the hard shoulder before the day’s work has even begun. And in the event of that highly unlikely scenario, there is a one-year electric roadside assistance package including rescue charging.

It’s all part of the Ford PRO concept which you can sign up for whether you are a one-man owner, a fleet operator, or, indeed, even if you don’t actually own a Ford vehicle at all. It’s a dedicated service covering sales, conversions, financing, servicing, smart charging, and software all under one central umbrella. As Ford Pro CEO Ted Cannis explains, “The biggest bugbear of any small business is paperwork and the ambition of Ford PRO is taking away the hassle of admin with automatic billing for charging, mileage reports, servicing reminders and so on.” Let the roofers fix the roof the plumbers do the plumbing, he enthuses……. A sentiment which will certainly strike a chord with all parties concerned.!