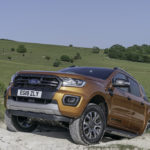 Construction Plant News gets to see whether the special Edition Ford Ranger Wildtrak really does have the X factor.

The past few years have seen a proliferation of new pick-ups in this once pretty unremarkable sector, as it becomes all about getting the work/lifestyle balances in perfect harmony. How many owners actually swap the muck and bullets for a surf board at the weekend is open to debate, but there is no doubt that this class of vehicle has metamorphosed into a very significant player in the LCV marketplace.

Like a lot of the biggest names, Ford had dabbled in the UK pick-up market for a good many years (who could forget the P100) with moderate success, but things got a whole lot more serious in 2012, with the launch of something more in keeping with the big and brash lifestyles of those across the pond.

As rough and as tough as they come, the first Ranger was like the new gunslinger in town, given a wide berth by all those who had previously talked the pick-up torque. Its throaty five cylinder, 3.2TDCI litre engine, solid rear axle, leaf springs, with market leading payloads of up to 1,300kg, and substantial load carrying capacities – plus the ability to tow a steam locomotive – winning it a posse of new admirers from west to east. But, as we all know, the narrative never ends just like that, of course. The other protagonists have all grown up a bit themselves in the ensuing seven years, and the Ranger today has some serious competition, both in appearance and performance. 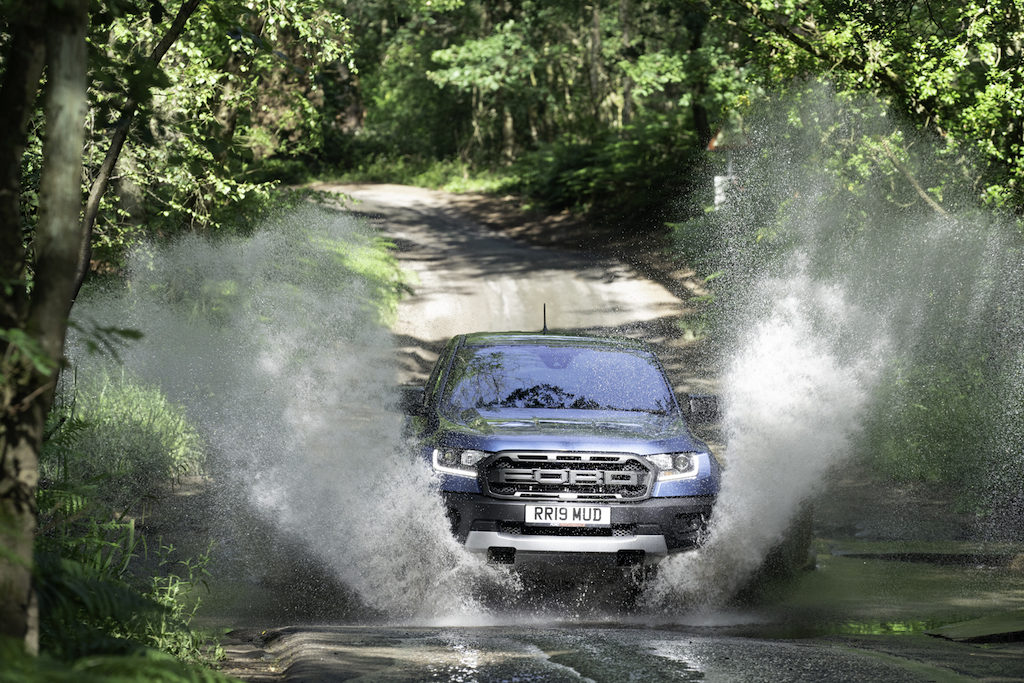 In fairness, Ford was never going to simply rest on its laurels and the Ranger has benefited from a series of tweaks and updates now extending to an entry level XL, the XLT, Limited and the Wildtrak, all of which we have driven at some point over the last few years. However, it seems they have saved their very best to last, (or at least we thought we had. See below) culminating in the latest, plushest Wildtrak X, designed unashamedly to take the shoot-out firmly to the likes of the new Mercedes X class, and the impressive Amarok, whose car like cabins, and performances, are the new benchmark for pick-ups, not least with on the road costs nudging past £40,000.

With just 1,000 made, the special edition six speed automatic (4×4) Ranger Wildtrak X gets a number of visual styling tweaks, an exclusive standout blue paint job with lots of trendy black trim. There’s a locking cover as standard to the load area, 18in. alloy wheels and extra convenience and safety kit.

Ride performance is largely what we recall from past experiences with other Ranger models – namely plenty of power and responsive handling. The ride generally improves with load and speed, and the high driving position gives a commanding view of what’s going on around you. All the generous standard Wildtrak spec is there, of course, including reversing camera, interior lighting, with dimmer control, climate control and infotainment system, with satellite navigation and SYNC 3. One little niggle was the sticky handbrake, which never quite returned to its starting point on release, bleeping away until properly engaged with an extra push. 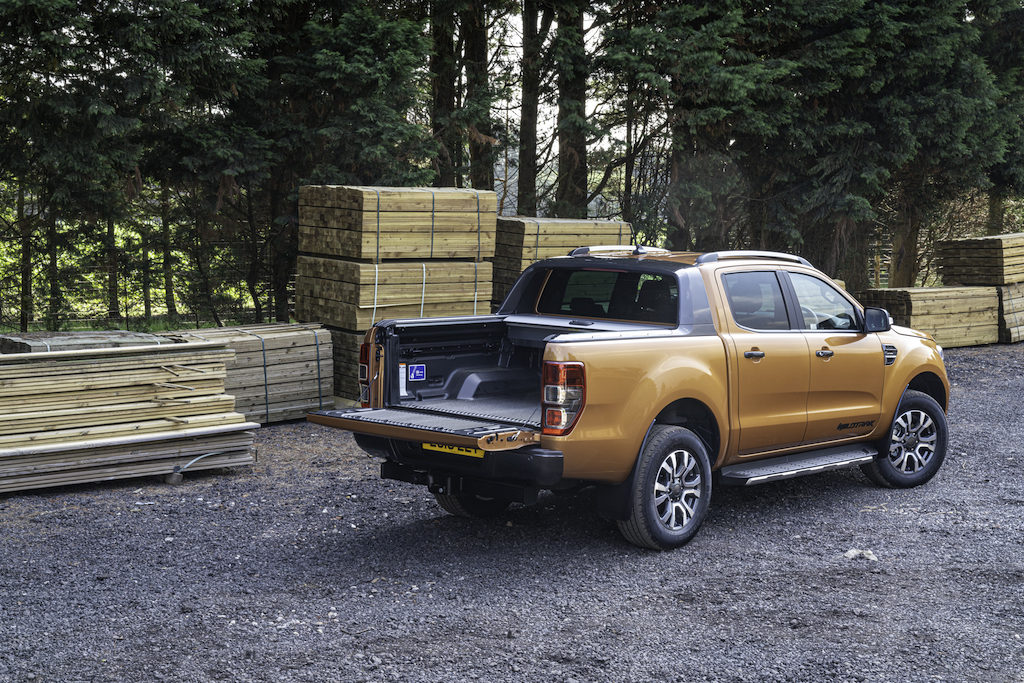 Netted cloth has been replaced with a premium leather upholstery with Wildtrak stitching. Scuff plates and floor mats unique to this model are there for those who have the temerity to get in with muddy boots! Ford actually lists 33 different key features – too many to go through here – but nothing you wouldn’t really expect from a vehicle at the very top end of the scale.

And there’s the rub. Ford quotes £33,574 for the Wildtrak X rising to £40,350 for our test vehicle, with a smattering of options, which is clearly a lot of money for those more accustomed to paying a good ten thousand pounds less for what are, in many respects, an impressive line-up of perfectly acceptable workhorses.

Of course, if business profile is important, order books are full, and you think envious glances in the builders’ merchant’s yard, at the supermarket, or down by the lake, is worth splashing out a bit more for, then the call of the Wild will be hard to ignore.

Unfortunately, even that sort of investment won’t necessarily give you the best pick up in town, because Ford have now gone and taken the four wheel driving experience to a totally unprecedented level. The new Ranger Raptor combines the brashness of its American F-150 cousin and the sophisticated engineering modifications of Daker-style rally specials to create a vehicle which in terms of go anywhere performance has “no straight from the dealer “equal in the UK. 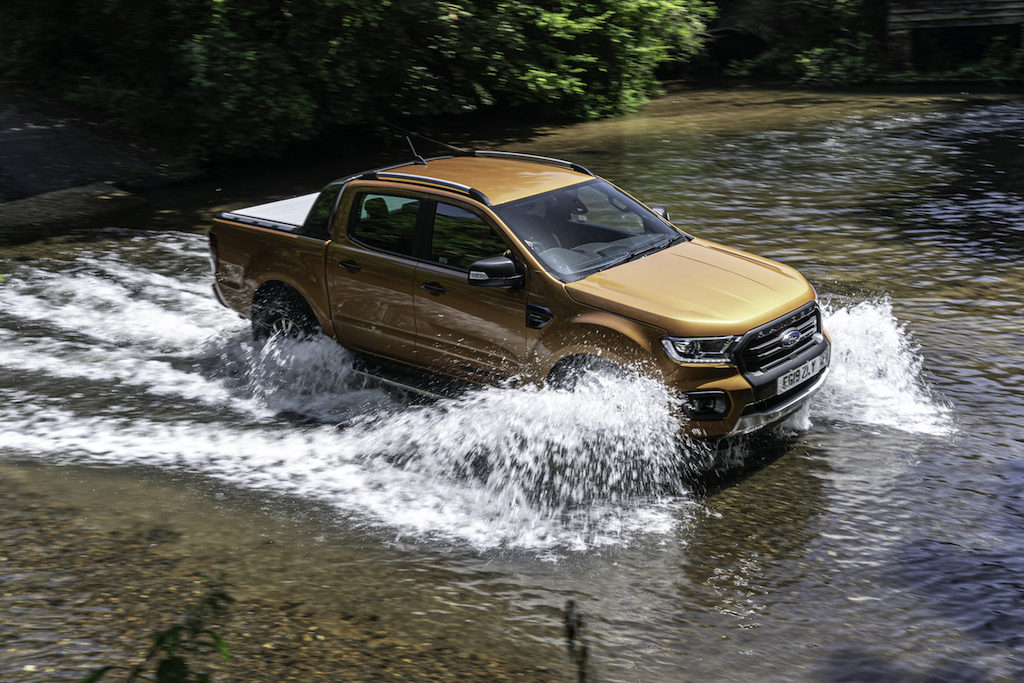 If you thought the standard Ranger had been on steroids then this is the incredible hulk and the terminator rolled in to one, with significantly enhanced bodywork, including flared wheel arches, meaty 17in. BF Goodrich tyres (sidewalls are 20 per cent stiffer too), a front bumper attached to the chassis and skid plate with specific tow hooks. It’s also 44cm wider, 168cm longer, 52cm taller while the ground clearance has swollen by 51mm. The departure angles are also improved and, just in case there was any doubt to its pedigree, it has Ford stamped in huge letters on the front grille.

The standard leaf springs have been ditched for coil springs, with Watts linkage to the rear, and the whole chassis has been strengthened to enhance the driving experience for both normal and extremely abnormal terrain. One special setting – which may be unfamiliar to many LCV aficionados – is BAJA, Daker rally mode where the engine and chassis are set up to cover rough ground very quickly indeed. Our off road test route in deepest Sussex was hardly the Sahara desert, but we quickly got the message that there’s not much out there that this ultimate vehicle predator wouldn’t devour in double quick time.

Somewhat surprisingly all that testosterone and machismo doesn’t extend to the engine, which is the pretty unexceptional 2.0 litre four cylinder diesel engine pushing out 210bhp. Thanks to its two turbos, it’s still a punchy engine, which creates slightly more power than the 3.2 litre engine available with other Rangers, but it’s been developed with one eye clearly on the UK’s on-going propensity to frown on the habitual gas guzzlers.

Six driving models are designed to change the driving experience, all of which are pretty faultless, it has to be said, and interior-wise, the comfort levels and trim are right up there with a top of the range saloon. But then again at an on-the-road price approaching an eye watering £50,000 you really wouldn’t expect anything less. And there’s another not insignificant niggle – with all the modifications, the payload drops from one tonne to just 680kg and the Raptor can pull 2.5tonnes rather than 3.5 tonnes. Fine if you loading a couple of bikes and a surf board, but not for a tradesman who faces the prospect on paying VAT on a vehicle which fails to meet the current criteria, although you do pay commercial vehicle VED.

The Raptor may be at the very top of this particular food chain but its cost of ownership will ultimately, one suspects, make obvious prey somewhat hard to find. 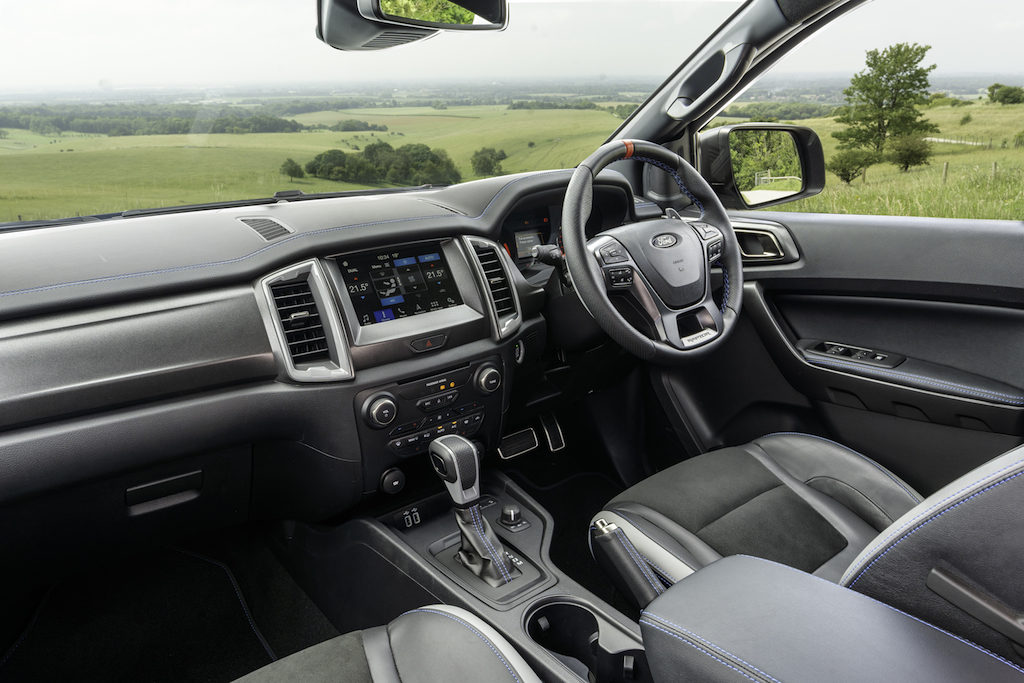