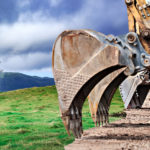 How the construction industry can “build back better for the world”

This time last year, the UK was still deep in the grips of the pandemic’s first wave. But as we hunkered down – transport grinding to a halt, construction put on hold – there was a surprising glimmer of good news.

In 2020, air pollution levels fell to their lowest since records began. The biggest change in UK air quality was noted in levels of nitrogen oxides – exposure to which can cause severe respiratory problems, such as asthma and lung disease. According to a report published by DEFRA, levels of NOx reduced by 30-40% and NO2 by 20-30% over lockdown. The biggest changes were in April and May, when restrictions were at their strictest.

A year on, as we eventually look to move irreversibly out of lockdown, we have an opportunity to forge a cleaner and more conscious attitude towards our environment. There can be no better time than Clean Air Day.

One of the largest emitters in the UK is the construction industry, which still relies heavily on regular diesels with the associated damaging emissions. A report published by the United Nations Environment Programme showed that construction accounted for 38% of all CO2 emissions globally. In 2019, emissions from the industry reached the highest level ever. Moreover, whilst emissions in general took a tumble during lockdown, the UK construction sector did not, seeing the sharpest uptick since 2014 across the board in early 2021.

Thankfully, the solution to these challenges is straightforward. It is acknowledged that clean air is linked heavily to reductions in greenhouse gases. If we strive for one, we generally will get the other in a green win-win situation. However, this solution is not always easily attainable in the short-term.

Forging real, long-lasting change can take time. The government’s pledge to ensure future infrastructure projects provide a net-gain for biodiversity following the Dasgupta Review is admirable, particularly as it recognises the economy’s power to enact green change. But it is a 25-year plan.

Thankfully there are pragmatic and deliverable alternatives for eco-conscious business to use today. There is no better way for construction companies to build a cleaner future for our air quality than by adopting advanced fuels. For example, using an advanced fuel like GreenD+ would see the CO2e emissions of 10 diesel engine items of plant emitting the same levels as 1 item running regular diesel with no changes required to the plant.

Not only do advanced fuels reduce greenhouse gases they also allow us to improve local air quality now, rather than letting another generation to grow up breathing in noxious emissions and particulates.  They are widely available throughout the UK and more widely accessible than other cleaner options such as green hydrogen buses or EV diggers.

Continuing to use regular fossil diesel while waiting for electrification to take off makes no sense, however great that alternative may ultimately be! Green D+ can and is already being used in existing diesel engines, meaning there is no waste from scrapping old hardware or carbon emissions from manufacturing new models. This transitional technology neither waits until it is too late nor stifles future developments; it forces  new technologies to be even better for all our benefit.

Climate change was a central theme at the G7 summit in Cornwall, with the guiding value to “Build Back Better for the World”. Leaders pledged to end the funding of new coal projects and to almost halve their emissions by 2030, relative to 2010 levels. But whilst environmental policy is set by the government, it falls upon businesses to deliver greener solutions. The new “cap and trade” approach to reducing emissions may force the big polluters to cut their emissions, but it is often the consumers who end up paying more. The UK’s ETS is already lagging behind other countries, so why continue with an expensive and ineffective scheme that simply papers over the cracks?

Investing in change is better than attempting to tax out old ways. Businesses that are already adopting advanced fuels need to be properly rewarded and celebrated for taking the crucial steps that benefit us all.

Political moves are frequently misguided and often fleeting. Under a system where the government changes every 5 years, we need alternative ways to implement long-term changes. A centrally agreed plan on how to secure a future of clean air should take precedent over the whims of changing Governments setting unrealistic long term plans but failing to deliver in the near term.

Whilst criticism levelled at the G7 nations for insufficient support for helping poorer nations cope with climate change is valid, we must also remember that air quality is local. The tragedy of respiratory illness as a result of poor air affects neighbours, families, and communities. The threats posed by greenhouse gases are indeed global problems but action is most effective when it is coherent and targeted.

The Clean Air Zone charge introduced in Birmingham earlier this week is a step in the right direction, prioritising a local focus. But, threatening drivers of vehicles surpassing emission standards with a daily fee, it is still too punitive.

When it comes to air quality, the simple facts are often tiptoed around. Consuming less means saving more, as lockdown showed us. But reduction is not the same as destruction and this is a vital lesson to teach the next generation. Rather than erasing our past mistakes, we must find a way to adapt older, dirtier technologies and make them more sustainable. Disposing of polluting technology is polluting in and of itself. A cleaner, greener future needs greater innovation but crucially more action today.