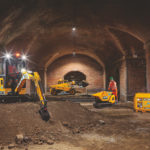 JCB is completing the circuit in its Road to Zero programme with a number of electric launches. Construction Plant News Editor, Lee Jones reports.

It was 75 years ago last year that JCB began its journey from the tiny lock-up garage of its founder Joseph Cyril Bamford to global force. Many of the innovations it has pioneered along the way are firmly established as amongst the indispensable companions of generations of contractors. The manufacturer was quick to produce machines that could operate efficiently in our urban centres, for instance, with the likes of the compact and nimble 3CX Backhoe Loader emerging as a champion in that space. Thanks to the demands of climate change – and a well-documented clean air crisis – the challenges of operating in our cityscapes have evolved still further, with a new era of environmentally-conscious JCB solutions emerging as a result – and the atmosphere is most definitely electric.

In just a few short years, the company’s road to zero programme has witnessed the introduction of a wide range of electric solutions. 2018 saw the launch of a brand new access platform portfolio powered by lithium ion batteries, for example. Perfect for working indoors, the five models operate at working heights from 6.6m to 10.1m, offer longer running times, faster charging times, and a longer battery life. 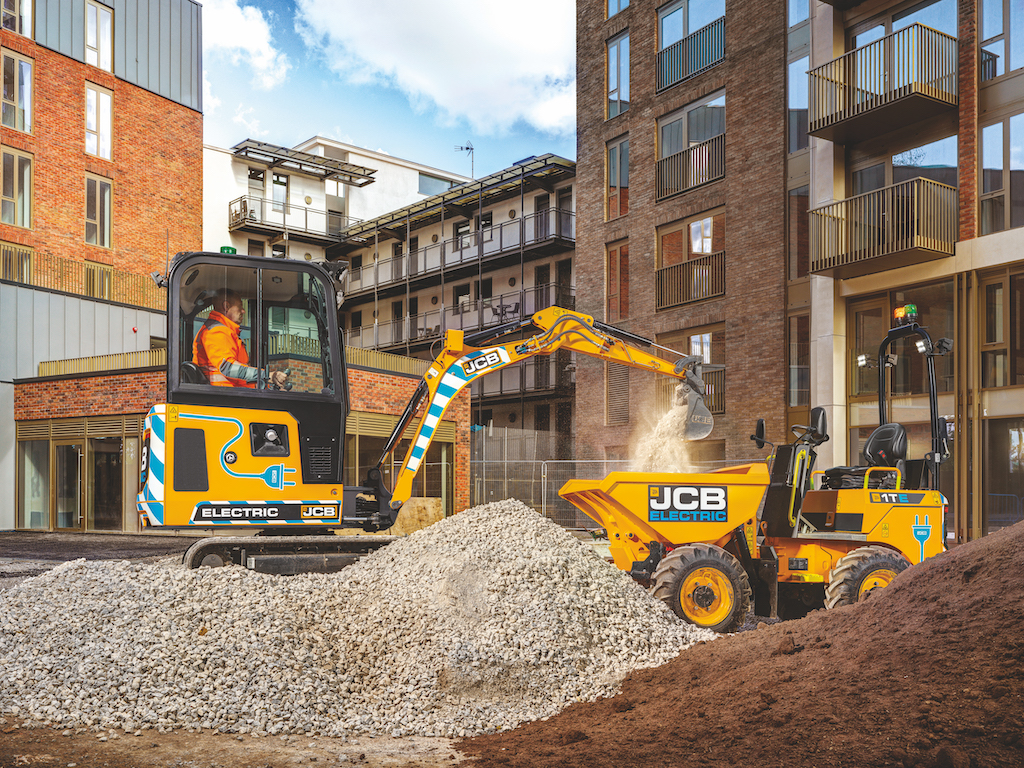 That same year saw the introduction of the zero emissions JCB 19C-1 E-TEC mini excavator, entering full production in mid-2019, and subsequently garnering two prestigious accolades from the Royal Academy of Engineering, and the Royal Automobile Club. It’s not just on pollution control where it scores points either, because this battery-powered mini is also five times quieter than its diesel counterpart, and is equally adept at working outside or indoors – eliminating the need to utilise expensive extractions systems in confined areas. Moreover, low noise could extend the window of activity for the machine earlier into the morning and later at night, whilst it makes for a much pleasanter environment for the driver. Its four next generation lithium-ion packs ensure full energy capacity of 20kW hours, which is more than enough for a full shift.

Not ones to stop in their tracks, 2020 has seen the E-TEC become a machine for all seasons, with JCB becoming the first manufacturer to offer a cab on an electric mini excavator, providing instant heat for demisting and defrosting, whilst keeping the operator comfortable. Cleverly, even when operating on its maximum setting, the heating only draws on half of the power from one battery, so there’s no impact on digging or tracking performance. 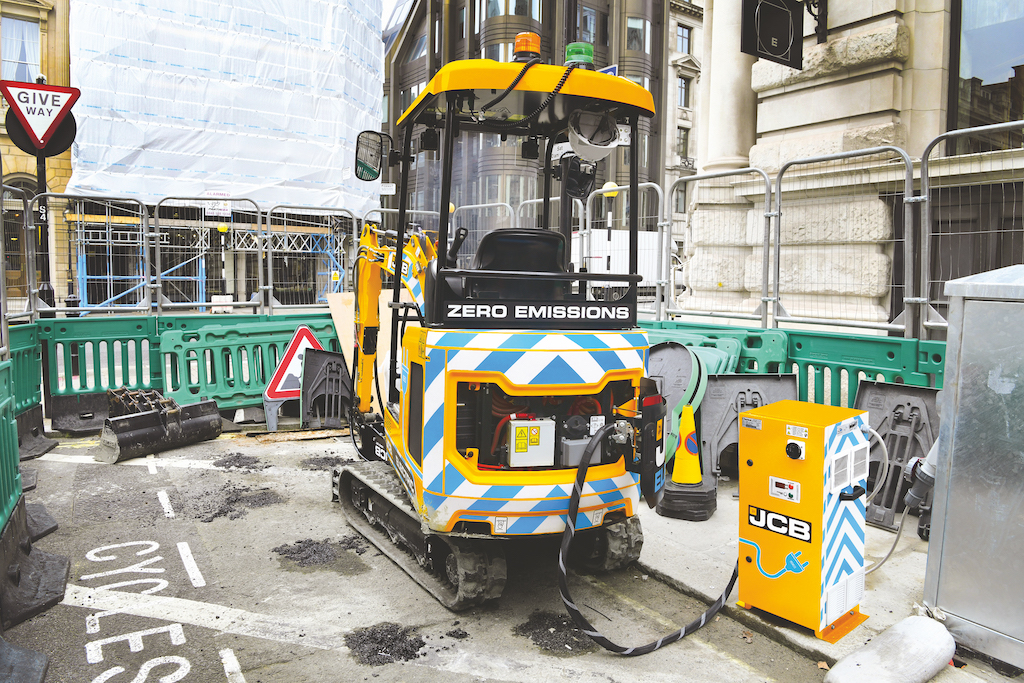 If customers don’t have access to three phase electricity on site, then the answer is a zero emissions, maintenance free, charging solution, with no noise and vibration and the point of use, and that’s precisely what JCB’s new range of power packs deliver. Ideal for rental companies, they can just as easily be utilised as back-up power for lighting, security and site welfare provision and, when coupled with a JCB generator set, can become a part of a hybrid arrangement. A steel canopy, and fork pockets for ease of transportation – and to position for recharging from a mains supply – enhances durability and convenience respectively. 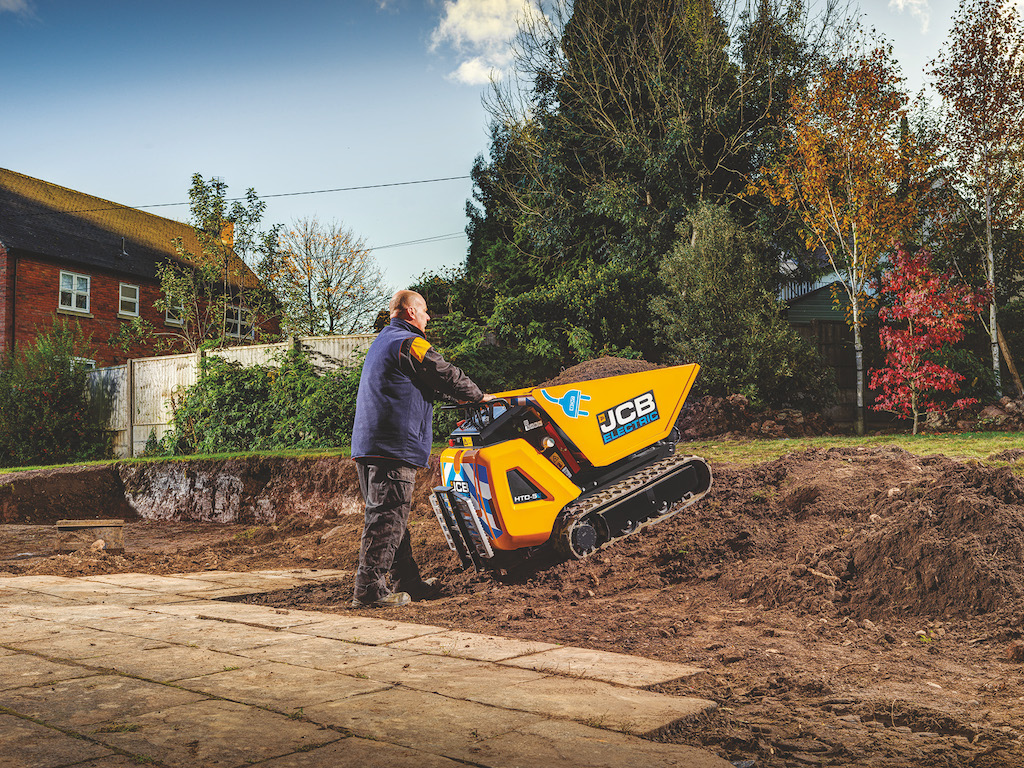 The onward charge of electric is now relentless and the more machines that are introduced to the market, the more the horizons for lithium ion will expand exponentially. That’s reflected in a swathe of new launches from JCB, which includes the HDT-5 E-Dumpster, an all-electric high tip dumpster which is capable of carrying up to 500kg. Powered by a 48V lithium-ion battery pack, that takes just two hours to charge, it makes use of either a 240 or 110V electricity supply. The 9kW motor delivers travels speeds up to 3km per hour and the machine is either walk behind or ride on. In the latter mode end users can make use of an optional ride on smart step, a feature which isolates power to the tracks if the operator steps off whilst the dumpster is moving, whilst still providing power to the skip and hydraulics.

Crucially for the smaller contractor, it can move through standard doorframes and, because it’s zero emissions, is ideal for indoor use. For larger jobs in materials handling you’ll need to move up the payload scale, of course, but that doesn’t mean you have to steer from the electric avenue, because JCB are now offering an all-electric one tonne 1T-E Site Dumper. 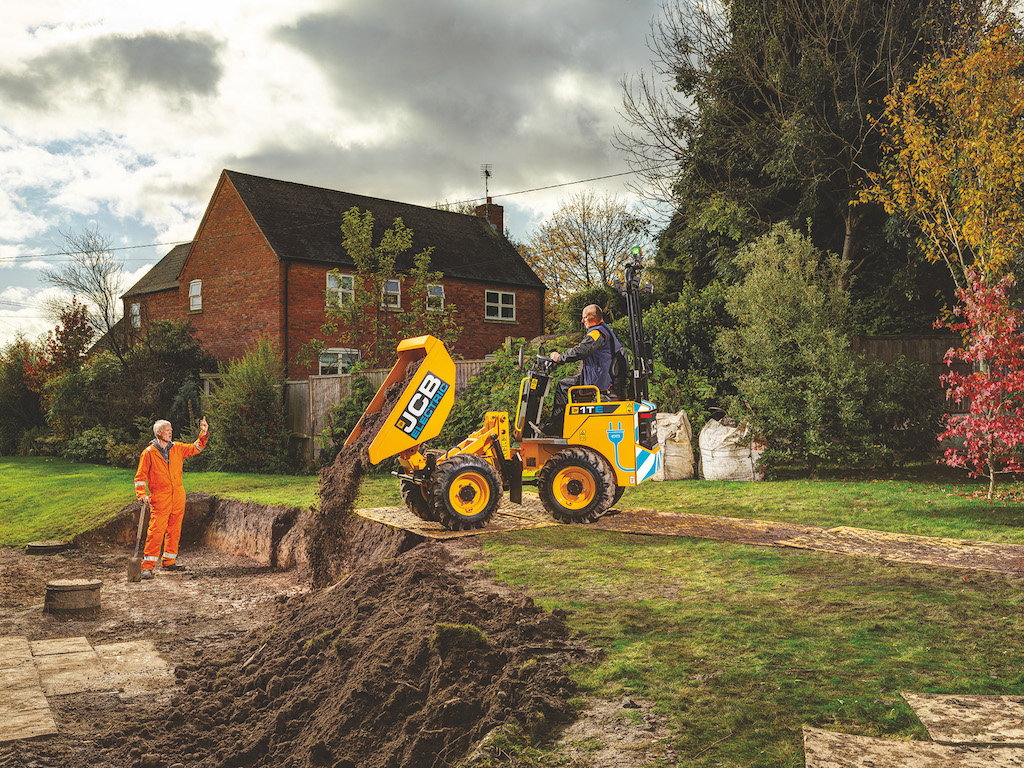 The ideal partner for the electric 19C-1 E-TEC mini, this high tip solution, benefits from a steel skip with a maximum load over height of nearly 2.4m, and a heavy duty articulated chassis that can handle a maximum payload of one tonne. The trend in diesel dumpers has been towards hydrostatic but, thanks to the adoption of drive axles and a dropbox in favour of hydrostatic drive motors, the 1TE remains a full-time, all-wheel drive unit. Power is provided by twin 5kW hr lithium-ion batteries, and a 7kW hydraulic motor delivers drive to the aforementioned dropbox, whilst a second hydraulic pump powers the hydraulic circuit for steering, and for the lifting of the skip. The batteries can be charged from a conventional site electrical supply with 110V and 230V cables available, or from the JCB Universal Charger for rapid charging. Site dumpers are a class of machine that have been under scrutiny from a health & safety perspective in recent years, but plant hirers and contractors can take comfort in the fact that all of the features that are present on the diesel are evident on the electric version.

On its launch the Teletruk challenged conventional fork lift design, with a telescopic side mounted boom providing the kind of reach and versatility that a vertical mast unit simply could not compete with. The electric 30-19E Teletruk sits alongside its diesel and LPG siblings in that range, offering 3 tonnes of lift capacity. Indeed, by utilising its telescopic reach, it can place a 1,600kg load 3metres into a van, and that machine is now joined by the 35-22E, with a 3 ½ tonne lifting capacity. 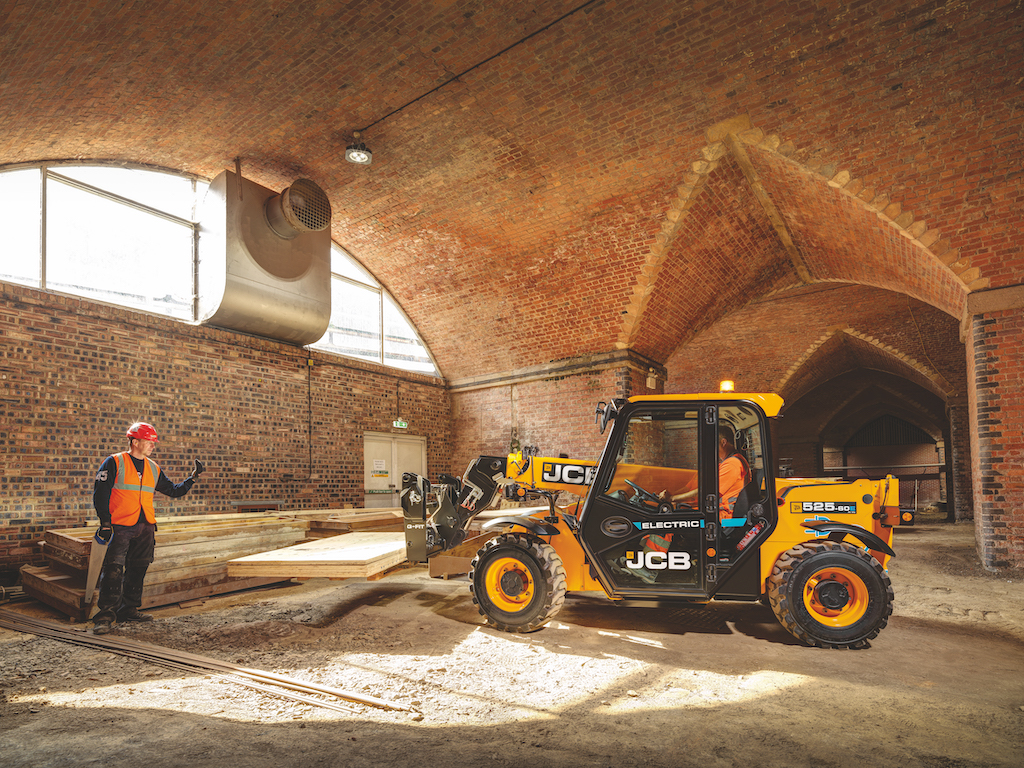 It is just a short conceptual leap from the idea of a battery powered electric telescopic forklift to a telehandler that utilises the same technology, and its one that JCB has ably bridged with its 525-60E Loadall.

This 6m, 100 per cent electric solution is every bit as capable as its diesel counterpart, but with a battery powered design from the ground up. A 96V lithium ion battery replaces the diesel engine, which can be fully charged from the previously introduced Universal Charger in just 60 minutes and is capable of a full shift operation on one charge. A regenerative braking system provides top-up charging in operation, the maintenance-free battery can be charged over 5,000 times – or over ten years of typical usage – and will function at temperatures as low as -20ºC and as high as 60ºC.

The 525-60E features two electric motors, one for the driveline and the second to power the hydraulic system. A motor controller converts the 96V lithium ion battery’s Direct Current (DC) into Alternating Current (AC) to power the 17kW transmission system motor and the 22kW hydraulic system motor. That motor controller manages the electric power demand from the transmission, and the hydraulic systems, ensuring optimum machine performance, balancing acceleration, decelaration and hydraulic control whilst loading, placing and transporting loads.

Whilst the diesel 6m Loadall has hydrostatic drive components, these have been removed from the 525-60E and replaced with electric motors that are more suited to this particular powertrain. The 17kW drive motor is connected via a dropbox and prop shafts to the front and rear JCB axles providing the same level of control that would be expected from hydrostatic.

The electric machine’s hydraulic system is also completely new, with the 22kW motor powering an internal gear pump, providing the same flow and pressure as on the diesel. Importantly, hydraulic flow is not linked to engine rpm with joystick position alone determining the flow and speed of operation. Moreover, smart, regenerative hydraulics deliver improved efficiency when lowering and retracting the boom, helping to preserve battery charge. In short, there’s exactly the same performance, but with zero emissions, and that means a lifting capacity of 2,500kg, and maximum load of 2,000kg at the full 6metre height. This size of machine is the most likely to be working in and around people – and indoors – which makes it the obvious choice for a journey of electrification for the Loadall family.

Electric machines are no longer just a niche option but are destined to occupy the mainstream. With zero emissions, low noise, reduced maintenance and cost of ownership they deliver what the modern world is now demanding. The bright sparks at JCB have promised that there’s much more to come in battery powered solutions, and its customers are increasingly switched on to the idea.

0 0 0 0
Previous : CATPLANT welcomes customised Dozer to celebrate 40 years in business
Next : Foyle and Marine Dredging bucks the Covid trend, thanks to Tefra hitches