The T 46-7s, T 55-7s and T 60-9s telescopic handlers from the Telfs plant in Austria were introduced in 2019 specifically for industrial applications. They are prime examples of how assistance systems and safety initiatives make a contribution to machine performance.

Auto Power
Moving materials with a telehandler demands power and speed, particularly when several movements of the operating hydraulics are being executed simultaneously. As the speed of the operating hydraulics is linked to engine speed, the driver has to press down the accelerator pedal while reducing the speed of the drive using the inch-brake pedal.

However, with Auto Power – activated via a toggle switch in the cabin – Liebherr models automatically adjust engine speed to the total power requirement when the operating hydraulics joystick is deflected. The system takes driving speed into account so that it remains constant and the accelerator pedal is reserved for operating the drive.

Fine Control
Certain applications in industrial materials handling require a light touch and one example is when loading high racking shelves using forks. To precisely set up a Liebherr telehandler for such applications, Fine Control is used with the operating hydraulics, again activated via a toggle switch. It reduces the speed of the operating hydraulics by 50 per cent, meaning the operator can call on all the machine’s reserves for speed and power or fine control for more exacting manoeuvres. 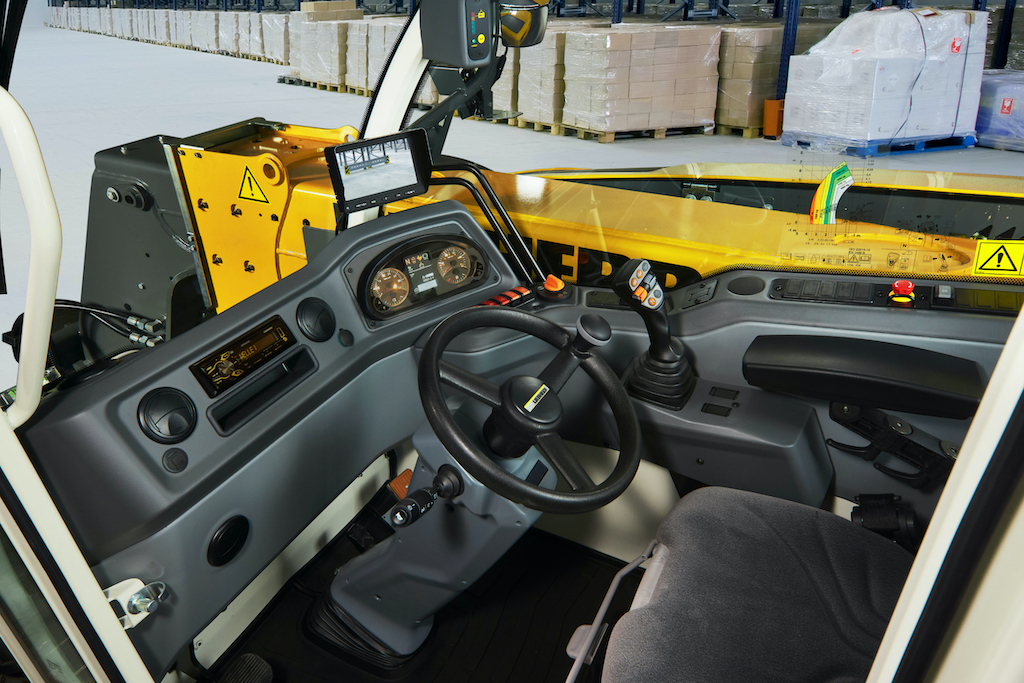 Programmable Bucket Return
For frequently recurring movements, such as skip loading, the operator can save any specific tipping angle and return to it simply by pushing a button on the joystick. The ideal angle of the loading bucket is always achieved without constant readjustment, meaning smoother loading cycles and an operator who is less tired.

Load Moment Plus
Customers who frequently handle heavy loads with the telescopic boom extended, and thus need more stability, often opt for Load Moment Plus, particularly on the T 46-7s which have a load capacity of 4.6 tonnes and seven metres lifting height. Although this does not change the maximum load when the telescope is retracted, the machine provides a full 25 per cent of load capacity when the boom is fully extended. Result? Power is used to the maximum when in the maximum position.

Inner and outer values
In industrial applications the telescopic boom is in constant motion under heavy load and inside, all service lines and hoses are routed together in one load carrier and bound to each other, free from chafing.

To absorb shocks and impacts, when loading hard, recycled materials, for example, and to prevent premature component fatigue, the boom cylinders are fitted with end position dampening. And, despite a soft approach that just “kisses” the end position, a vibration function gives assistance to allow the bucket to be emptied safely, even with binding material. 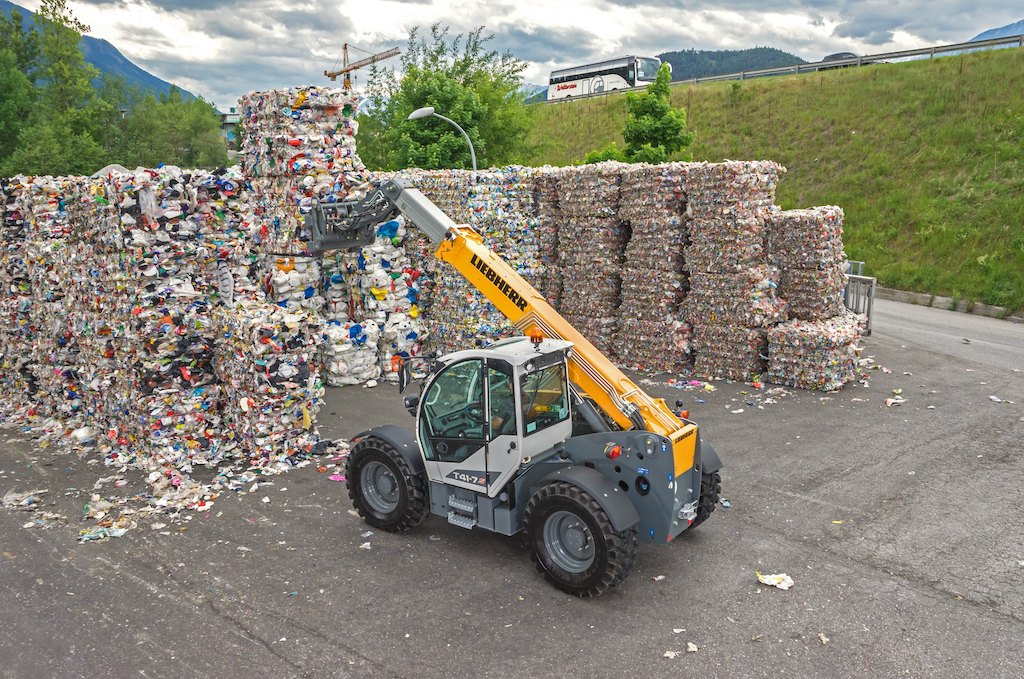 Overload Warning Device
If electronic stability control intervenes in your car, you probably won’t notice it. But it’s different in a Liebherr telehandler. Here, the overload warning device continuously measures current load situation and indicates output via an LED display in the cab. The device is constantly in standby mode and ready to intervene if the normal situation (green display) changes. The speed of the hydraulics is reduced in the yellow zone to increase dynamic stability and if the red zone is reached, only those movements that return the load into the safe zone, i.e. closer to the base machine, can be made.

The function can be temporarily deactivated to use full power when digging at the edge of trenches or for the last few centimetres when placing a pallet.

Eco Motion
Eco Motion is an additional option for smaller Liebherr handlers – those with a payload up to 4.1 tonnes – that enables the boom to be lowered load-free. The system is already familiar to users of Liebherr’s mobile and crawler excavators and uses gravity to return part of the hydraulic fluid in the cylinders. It’s a preferred option for customers who carry out large numbers of loading cycles.

Comfort Drive
This feature can be regarded as a transition as technically, the option is on the telescopic boom, but the results take effect when driving. The boom is compensated by an automatic hydraulic counter-movement under uneven driving conditions. The option is activated automatically from 7 kph, but a toggle switch can be used for slower movements. Anti-vibration damping prevents rocking and is recommended for machines that will often be driven at speeds above 30 kph.

Sit in, drive off
Hydrostatic drive has been a feature of Liebherr’s construction machines for more than 50 years and allows operation to start immediately without disengaging the clutch, changing gears or braking. So that machines can always be manoeuvred safely on any terrain, there are various comfort functions: differential lock, disengage all-wheel drive (less wear and tear) and electronic selection of the four different steering modes.

Auto Hill Assist
This feature acts as a drive-off aid to improve safety on steep slopes, especially useful when taking loads off-road or towing a trailer. On inclines, the driver has only to take his foot off the accelerator pedal for the machine to stop and the automatic parking brake to activate. It releases again as soon as the vehicle restarts.

The parking brake is always electronically controlled via a switch in the cabin – there is no handbrake lever, like other manufacturers’ machines.

Manual Control Package
On the right-hand cabin console are two mini joysticks that control driving and operating hydraulics. They allow vehicle and engine speed to be set, as well as the appropriate litre capacity of the hydraulics, for setting continuous operation of, say, a sweeper attachment or concrete mixing bucket. 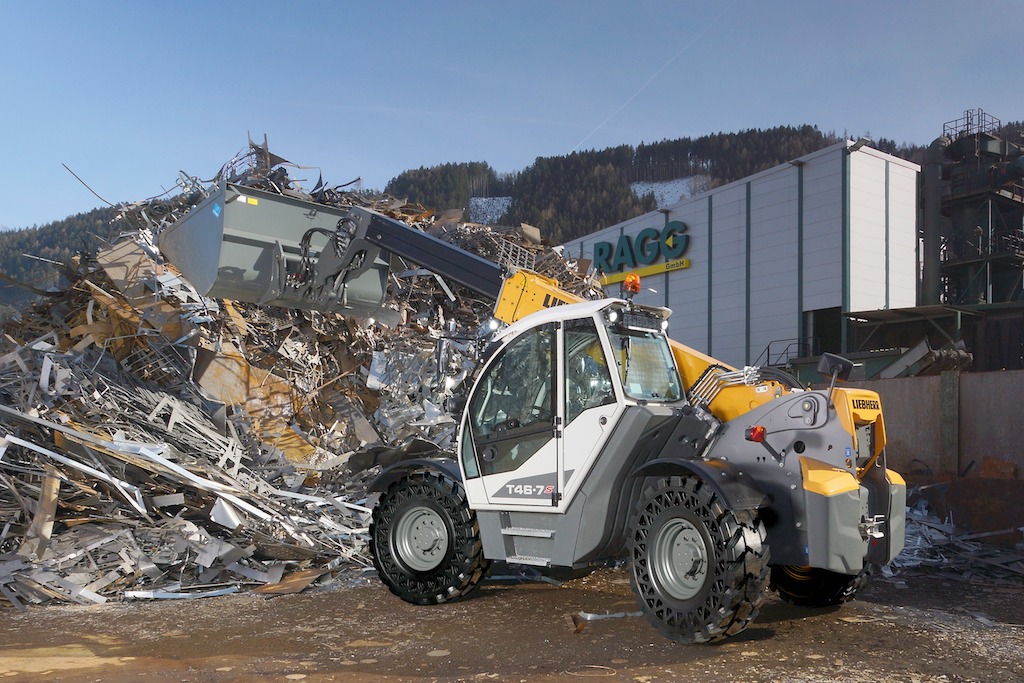