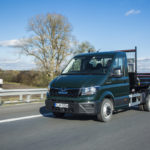 If you are in the market for a compact tipper, skip loader or dropside truck, MAN Truck & Bus has recently added to the range of vehicles on offer. Dan Gilkes gets behind the wheel.

The company now offers its TGE van and chassis line with gross weights right up to 5.5-tonnes, providing more than 2.5-tonne of carrying capability on a vehicle that still looks much like a 3.5-tonne van.

The TGE line-up which is, of course, based on parent company Volkswagen’s Crafter, is now offered at 3.0 – 4.0 tonnes with front-wheel drive or all-wheel drive, while rear-wheel driven models go from 3.5 – 5.5 tonnes. Those rear-drive models can be ordered with single or twin rear wheels, to suit your individual needs, though most building and construction companies are likely to opt for the twin rear wheel set-up, particularly if you tow.

All TGE vans are powered by VW’s 2.0-litre diesel engine, but there are some differences, depending on which driveline you go for. The front-wheel drive TGE can be ordered with 102hp, 140hp or 177hp, while the 4×4 models, which are based on the front-drivers, are offered with 140hp and 177hp engines.

The rear-drive vans and chassis are available with the 140hp and 177hp engines at 3.5-tonnes, while the 5.0 and 5.5 tonne models can be ordered with a dedicated 122hp engine or the range-topping 177hp diesel. A six-speed manual gearbox is standard on all models, while the 140hp and 177hp models can also be ordered with an eight-speed automatic transmission.

Perhaps unsurprisingly, for MAN the mix of TGE sales is more heavily tilted towards chassis cabs for conversion than its parent VW’s Crafter. Around 21 per cent of TGEs are built as single cab chassis, with a further 9 per cent the double cab chassis. As with all manufacturers, MAN offers a range of pre-bodied popular models and 27 per cent of TGE chassis are converted within the factory. The remaining 73 per cent go to approved body builders for conversion. MAN operates a web-based Body Builder Portal, providing all the necessary data, electronic interface and build information for converters. This has been available to truck buyers for some years and the TGE range was added to the system earlier this year.

There is little to show that the 5.5-tonne TGE can run a full 2.0-tonnes heavier than the regular 3.5-tonne tipper from the outside, other than the model number on the front wing starting with a 6 rather than a 3. As a tipper, it is fairly high riding, though the driver still sits well below a typical 7.5-tonne truck.

There is little doubt that for some owners this will be part of the attraction of a 5.5-tonne model, particularly those contractors working in confined urban operations or residential streets where a larger truck chassis would be unwelcome. It’s a bit like Iveco’s 7.2-tonne Daily, as the 5.5-tonne TGE provides a friendly van face to the general public, rather than looking like a big truck on urban roads.

However, the TGE is built to work. Even with a sturdy steel Meiller tipper body, the 5.5-tonner offers more than 2.5-tonnes of payload. But even fully laden, it still drives much like a van. Our test model was powered by the range-topping 177hp engine, which provides plenty of power to get things moving. That said, the truck is of course limited to 56mph and drivers will require a tacho card to use on UK roads.

While the performance of that 177hp engine is undeniably blunted by the extra weight, the TGE retains the light steering, controlled suspension and reassuring braking that drivers will recognise from the lighter models. This helps to make it an easy vehicle to drive in town, on country roads and even on the motorway.

Of course, for some companies the 5.5-tonne TGE still won’t have the necessary carrying capacity, particularly for skip use. Should you need a slightly bigger vehicle, MAN has updated its TGL and TGM truck models, with the addition of Euro VI-d engines. The TGL and TGM use the firm’s latest D08 engine, which meets Euro VI-d emissions standards through the use of Selective Catalytic reduction (SCR), but without needing Exhaust Gas Recirculation (EGR). It’s available in four and six-cylinder layouts and features an intelligent alternator management system and lower ancillary power requirements, to reduce the amount of energy taken from the engine.

MAN’s 7.5-12 tonne TGL line-up is available with both the four- and six-cylinder versions of the engine, driving through a six-speed automated TipMatic transmission. The four-cylinder motor can be had with 160, 190 or 220hp, while the six-cylinder engine delivers 250hp in the TGL.

The heavier TGM range, which runs from 12-26 tonnes, is only powered by the six-cylinder engine, offering 250hp, 290hp or 320hp. All power ratings drive through a 12-speed TipMatic transmission. Service intervals have been extended on the D08, from 12 months on the previous engine to 18 months, further reducing operating costs. Both TGL and TGM models can be had with a range of single or crew cabs and while the TGL is only offered as a 4×2 chassis, the larger TGM can be had with 4×2, 4×4, 6×2 and 6×4 drivelines.