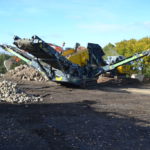 Shorts Agricultural have made a significant investment in Rubble Master machines through dealer UK Red Knight 6. Construction Plant News Editor, Lee Jones goes on site to find out why.

“We took one on demonstration initially and I fell in love with it,” declares Matthew Campling, Shorts Agricultural’s Commercial Director. Two months on and the HS3500M tracked Rubble Master scalping screener has been hard at work at the Berkshire home of the hirer and contractor, joining an existing RM70GO crusher from the same manufacturer that’s already given Shorts four years of reliable operation. Both units were supplied by the UK dealer for the Austrian manufacturer’s equipment, Red Knight 6, and Shorts team are convinced they’ve added a screen star to a growing cast of equipment. 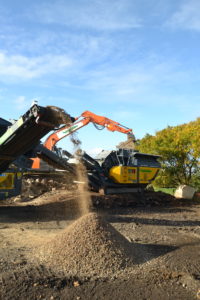 “This is a very versatile machine,” continues Matt, and the screener is being used here for a range of applications, including 40mm type 1, but we’re also running our topsoil, composts and planings through it. As well as that, it goes out on hire, and we utilise it on some of our own contracting projects.” Given that this is a machine that’s on the move, ease of transportation is a prerequisite for the Shorts Agricultural team, and that’s just what this Rubble Master Screener provides. “The compact dimensions are particularly welcome, and it folds up very neatly. When deploying it on site, or delivering to a customer, it’s a 15 minute job to render it operational.”

That view is endorsed by operator Andy Philips, who points out some of its time saving features. “The detail in the design is evident,” he enthuses, “and it makes the delivery a one-man operation. The hopper slides back and lowers in one movement, for instance, which does save time, and it’s then fully secured with just two locking pins. The integrated folding side conveyors lift and then articulate over the machine via dual controls. When you’re lifting the conveyor you complete the operation from one side and – when it comes to folding it over – there’s another set of controls on the other side of the machine, which means you’ve got a good view of every stage of the manoeuvre. I’ve worked on some screeners where you’ve had to remove up to 16 bolts just to fold a single bail, and that can take a lot of time. In operation there’s also very little that can go wrong.

The 16 ½ tonne unit, part of a range of screens, is equipped with a heavy duty screenbox, and 5m3 hopper capacity. Whether it’s concrete, asphalt, and millings, or construction and demolition waste, the HS3500M will run through it fast, whilst even wood chips are food for its insatiable appetite, and everything’s kept on the move by a reliable 75HP, 55kW Tier 4 final Deutz engine. Rubble Master purchased Northern Ireland mobile tracked screens maker, Maximus in 2018 and has since employed its manufacturing expertise in enhancing key elements of the range, and the new Shorts Agricultural unit features enjoys all of those upgrades.

“The expertise for which Rubble Master has become renowned in its impact crushers has been brought to bear on the screener range,” enthuses Paul Donnelly, Red Knight 6 Managing Director. “Since that takeover there have been improvements in the factory and a streamlining of the range. Ease of use is a principle that runs through the Rubble Master DNA and that’s evident in the design changes. The folding mechanisms, the controls, and access to the walkways have all been improved with the express aim of making life easier for the operator.” 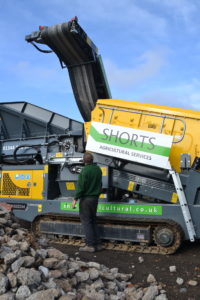 The quality of Teutonic engineering needs no introduction, of course, whilst the Northern Ireland production base of the Rubble Master screeners is in one of the established centres of the sector, but the Austrian manufacturer also brings a particular knowledge of fuel saving diesel-electric drive systems to the table. Paul looks ahead to what will be coming off the assembly line in the future: “The direction of travel is now firmly away from diesel, and Rubble Master are very well-placed to be at the forefront. A lot of our competitors are still running fuel hungry hydraulic drives whereas Rubble Master has invested heavily in perfecting it electronic systems. There’s a RM120 Hybrid impactor coming, for instance, that can be run 100 per cent electric from an on-site power source, at that’s a concept that will filter down to the rest of the range.”

The impact crusher is a class of machine that is still less prevalent in the UK market than its established jaw crusher counterparts. The higher quality and more marketable end product that impactors can provide is, however, making them more and more appealing, and Rubble Master can point to nearly three decades of experience with the technology. Its crushers can accommodate a very wide range of material, including rubble, asphalt, concrete, and medium-hardness natural rock.

“It’s very easy to run, manoeuvre and transport, and I particularly like the remote control,” he enthuses, “which can adjust the hopper and move the whole unit itself on its tracks. Those tracks will plough through rough terrain, or gradients, and overall, it’s just kept running for us. All we’ve had to do since we’ve been using it is change the hammers, and there’s a handy device for that, including a lifting hoist, whilst you can store spares on the unit itself, so you’ve got them on site when you need them.” In operation, the Rubble Master RM70GO produces up to 150 tonnes of cubic high-quality grain per hour, weighs just 19 tonnes, and is powered by a low noise and reduced emissions John Deere, 4 cylinder, 115 kW engine.

“The aggregates market is now demanding very clean, consistent material that is sized to an application,” concludes Matt, “and that’s just what an impact crusher like the RM70GO and the HS3500M Screener working in tandem will provide, all in a very user-friendly package.”