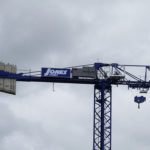 Sanctuary Wilmslow is an exclusive gated community of luxury cottages and apartments for the active over-55s, and Jones Homes will use the top slewing tower crane to transport and lift materials for the main apartment block.

The heaviest elements are the floor joists and elevator shaft components, weighing up to 5 t, for which the 5 t capacity MCT 88 is ideally matched.

“For the size of the crane, the capacity of the lift on the MCT 88 is very good compared to other types of cranes we looked at,” said Chris Lord, divisional development director at Jones Homes North West.

“It also lends itself perfectly to the transportation of bricks, blocks and roof trusses, whereas normally we would have forklifts and other such vehicles lifting materials onto the scaffold. It’s much more efficient, productive and safer when you don’t have those machines buzzing about the site where people are working – and safety is key,” he continued.

Lord also praised the crane’s remote-control feature, which enables the operator to manoeuvre it from ground level rather than having to climb up into the cab. The operator can move around the site to the best vantage points and cooperate easily and efficiently with other site staff.

Jones Homes’ new Potain MCT 88 was erected to 23 m height under hook with a 42 m jib on a cross base with 35 t of base counterweight and it will remain on site for around 18 months.

“I commend the Manitowoc team for their speed, safety and professionalism. It was great to watch the guys move about with their own jobs knowing exactly where they need to be and what they need to do. The crane was completed just as our chairman was visiting the development and he was pleased to see his latest addition to the group fleet being tested and essentially operational,” he said.

Tried and tested
Jones Homes already owns another Potain MCT 88, which gave the homebuilder the confidence to invest in a second unit. The company’s first MCT 88 was erected 18 months ago at its Sanctuary development in the grounds of the Last Drop Village Hotel & Spa in Bromley Cross near Bolton.

There the crane is carrying out similar work, lifting bricks, blocks, motor tubs and roof trusses into position but for the construction of houses rather than an apartment building.

“It’s fairly light work for the size of the crane, but the important thing is to be able to do it safely and quietly,” Lord explained. “The sound of the crane moving is silent compared to a forklift reversing when we have hotel guests nearby.”

The MCT 88 will work on the Sanctuary at Last Drop Village project for a further six to eight months before it moves on to another of Jones Homes’ developments.

“Our crane drivers have found the MCT 88 easy to operate and it’s been virtually maintenance free.

“Overall, we have been very happy with the service from Manitowoc UK. Jerry Welford, who we’ve been dealing with on this purchase, and David Barrett, who helped us with the previous one, have both been exceptional. They were both on site for a review prior to delivery and there’s been lots of communication throughout the entire process. We especially appreciated Jerry keeping us up to speed with everything that’s been going on with COVID-19. Just excellent,” he concluded.

Commitment to quality
Founded in 1959, leading homebuilder Jones Homes constructs more than 600 luxury new properties a year, along with carrying out restoration projects and listed building conversions. The organization consists of four companies in the UK – Jones Homes North West, Jones Homes Yorkshire, Jones Homes Southern, and Jones Homes Lancashire – and is part of the Emerson Group, which is one of the largest family-owned construction companies in the country. Jones Homes combines adherence to traditional values with adapting to the changing needs of customers – and prides itself on delivering the highest standards of quality and customer service.

0 0 0 0
Previous : Selwood pumps can be fueled by Hydrotreated Vegetable Oil in UK rental first
Next : What does the construction site of the future look like?