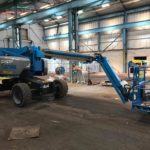 When it comes to green credentials Quick Reach is a powered access specialist that’s aiming for new heights, and Genie is supporting its ambitions.

Sustainability is now the guiding principle of our age, and anyone who can prove their commitment to it will be in a position to access a considerable business advantage. Indeed, with the onward march of the low emission zone across our towns and cities, and individual projects like HS2 now demanding their own stringent standards are met, it is now and imperative. One company that has now implemented its own highly successful green strategy is powered access specialist, Quick Reach and Genie has supported the initiative by supplying more than 10 of its Z-60/37 FE Fuel Electric Hybrid System machines to the hirer.

“We started Quick Reach five years ago,” explains Director, David Barton, “and we now command a national reach across four strategically located depots. Alongside that expansion, a more sustainable and environmentally friendly attitude to every aspect of our business has evolved. For contractors, reducing emissions, and their carbon footprint, is invariably an essential part of fulfilling a contract, and that’s why the Z-60/37 is a great machine for us, because we can help them do just that.” In fact, Quick Reach took the bold step of being the first company in the UK to purchase Genie’s flagship hybrid product, and will be keen to add further units featuring the same technology when they become available.

Continues David: “These are machines that certainly don’t come cheap, and for us the easier and safer decision would be to invest in conventional Diesel, especially with the perennial pressure on rates, but we’ve taken the decision that, wherever it is feasible to do so, we will add electric or hybrid to our fleet. Because there are presently so few people still offering hybrid to their customers, we can command a better rate, and there are significant benefits to the end user.”

The Genie Z-60/37 FE is effectively two machines in one, which offers contractors the flexibility to have fewer piece of equipment on site, with all the associated savings in delivery, collection, fuel, operators, servicing and maintenance that would entail. Where a site might feature an electric unit for indoor work and diesel for outside, a hybrid can simply switch between the two, whilst a full day’s work can be achieved on a single charge, or week’s run time from a single tank of diesel. Indeed, FE technology will find a place in any location where low noise and zero emissions are required and, with a performance that’s 25 per cent faster and better at climbing slopes, it can actually outperform its diesel counterpart in some applications.

At the same time that you’re making use of the engine powered generator, the batteries can be recharged, whilst there’s sufficient muscle from the 24-hp Tier 4 Final/Stage IIIB powertrain to cope with the most demanding terrains. Not only that, but the platform delivers 20.16m of working height, 7.39m of up-and-over reach, all with 2,268kg less weight that a conventional diesel.

The Z-60/37 FE has all the reliability guarantees you would expect of a Genie, and that’s certainly been the experience of David and his Quick Reach team. “We’ve had absolutely no problems with the machines at all,” he declares. “Given that it’s a new concept for this particular manufacturer you would expect some teething problems, but there’s been none, and their reliability cannot be faulted. We’ve supplied a number of machines to the building of an Amazon distribution centre in the north west, and as soon as the operators got their hands on them, those were the machines that they asking for on the basis of versatility and reach. On a project of that scale we can have well over 50 machines on site, and if they’re all burning diesel and releasing emissions that can have an impact on local air quality. Clearly, with the hybrid or electric alternative that problem is significantly reduced.” With a basket capacity of 227kg, two people can be easily accommodated, whilst the machine has seen considerable positioning power built in to the design. There’s 160º of platform rotation for instance, and a 1.52m jib provides a high range of motion of 70º up and 65º down.

For Quick Reach, the environmentally friendly strategy has extended to a complete rebrand. “Where actually looking to launch an ‘eco’ depot, where everything that leaves the gates will be either electric or hybrid,” adds fellow director John Barton. “It would be something that would be in synergy with London’s Non Road Mobile Machinery Low Emission Zone, for instance, and would work very well in the capital. Of course, we can only adopt these new technologies as quickly as Genie and the other OEMs can supply them so we’re really pleased to see that a major player like them is taking this seriously. It’s also about changing mindsets and we are ourselves involved in a process of education with many of our own clients, who might be reluctant to move away from diesel.”

The Genie roadmap will see a significant focus on the zero emissions sector, and it is driven by not just regulatory challenges but genuine concerns at every level of the industry about the impact that construction is having on our climate. That’s why the FE concept is set for further expansion, with the introduction of the Z45 FE at Bauma, for instance, and these are expected to hit these shores within the next six to eight months. As far as Genie is concerned, blue really is the new green.