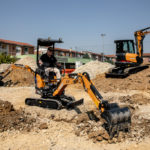 Construction Plant News investigates some of the highlights in the extensive CASE D-Series mini excavator range.

When it comes to mini excavators the eagle has well and truly landed with an all-new line-up, complete with two battery-electric models, and a premium level of standard features and options. Coming soon after the introduction of the new CASE Construction Equipment E-Series offering, it represents a particularly active period of product development for a company that is celebrating a remarkable 180th anniversary in 2022. There are, in fact, 20 machines in the D-Series Mini-Excavator line-up ranging from 1 – 6 tonnes, signalling a clear commitment to a sector that represents nearly half of all European machine sales.

The smaller of the two new electric machines in the CASE Construction Equipment line-up – the 1.3 tonne CX15EV – is based on the manufacturer’s existing CX12 internal combustion engine sibling. An 8-hour run time on a full charge is complemented by an ‘overnight’ charging time of 10 hours via a standard 220V cable. With the external fast charger, however, that can be reduced to under 2 hours. Power is derived from a 16kW electric engine with a 21.5kWh battery. The longevity of those lithium-ion batteries is calculated in recharging cycles – a figure which is around 3,000 – meaning they will typically enjoy at least a 10-year lifespan.

The benefits of electric in terms of zero emissions and noise are well documented, but what is often overlooked is the power that electric compact equipment can provide the end user. The aforementioned diesel CX12 has 8kW of power at its disposal, for instance, whilst its electric counterpart will boast 16kW, with the added benefit of maximum torque from the moment you activate the machine. Add to that a solution that’s perfectly suited to working indoors, on night shifts, or in any environment where exhaust fumes and the sound of an engine would be an issue, and you have a very versatile on site tool. Another oft neglected consideration is radically reduced levels of maintenance, as well as on-going after-market expenditure in the likes of filters and lubricants.

The CX15EV is also a highly technological design with electro-hydraulic proportional control, which means that flow rates and speeds – including everything from slewing to travel – can be controlled from the in-cab display, depending on application. There are also three pre-set modes: Precision for levelling and grading, Normal for general use, and a further Productivity setting.

A characteristic of the D-Series range is that there’s a multiplicity of options and features in each segment, with a zero-tail sing machine available at every weight class, and retractable tracks up to the 2.2 tonne. The latter providing a minimum width of 790mm and allowing access through a standard doorway.

All models from 1.7 tonne come with either cab or canopy, which is a unique offering – as is the option of a two-piece boom on four models within the 2.0 – 6.0 tonne range. A combination of an up to 30 per cent higher operating range, 10 per cent longer reach, and the ability to dig below the machine – as well as closer to it – makes the two-piece an increasingly attractive design, especially in confined spaces. Additional high-tech features found in all models are the electro-hydraulic controls, hydraulic settings, a load-sensing electronic pump and flow-sharing control valves.

In terms of sales, the 1.5 – 2.5 tonne sector is the most important in Europe and there are four units available across this weight range – the CX17, CX18, CX19 and CX20 – with the breadth of choice again reflecting the diversity the market demands. The CX17 is seen as a rental solution, for instance, whilst the CX19 is a higher spec unit targeting owner/operators.

All of the machines in the D-Series range have a tiltable canopy or cab, which can be operated by one person, and facilitates easier servicing access. Moreover, models from the CX35 and CX37 and below feature engine power which is under 19kW, eliminating the need for a DPF or AdBlue, whilst the CX42 and upwards will make use of a diesel particulate filter.

Amongst the larger machines the functionality increases. The CX60 is two-speed but is additionally equipped with automatic shift up and shift down which senses when more or less traction is required. The flow on the three independent auxillary circuits can be customised via the digital display in the cab, with adjustments made according to the attachment, with the tools available including buckets, breakers, mulchers and more. From that same consol the driver can also force the regeneration of the DPF.

The same cab is evident on all machines from the 3.7tonne CX37 and onwards, while further creature comforts and assistance systems for the driver include automatic air conditioning and heating, and a rear camera as standard on the CX60 and CX65 – and as an option on the CX42, CX50 and CX55. Additional optional features include additional working lights and optional DAB Radio, Bluetooth, USB, suspended joysticks and a seat with pneumatic suspension and heating.

SiteConnect enhances telemetry data used by CASE’s Uptime Centre team to provide dealers with alerts based on machine performance. Fast corrective action to minimise downtime is possible, as dealers remotely access machine data and take corrective action faster. This enables dealers to be proactive in managing customers’ machines and boosting uptime. Both SiteWatch and SiteConnect are available on the new D-Series Mini-Excavator range from 2023.

To further boost the flexibility, up-time, productivity and profitability of its new D-Series Mini-Excavator range, CASE has created Service Maintenance Kits for models across the range.