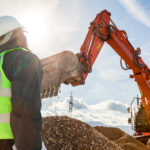 The continuous need to create safe working spaces
Personal space is a concept that we can apply to the safety world. As individuals, we sometimes think, ‘don’t crowd me’ when others get too close. The same mindset can be adopted when personnel are compelled to work around plant and heavy vehicles on site. Only this time, it’s not just about annoyance, but essential safety.

SiteZone proximity warning system (PWS) was originally accompanied by a complementary safety campaign called ‘Don’t burst the bubble’ (DBB) when it first launched. The campaign was designed to inform at-risk personnel, health & safety and site managers about work-related collision dangers and raise their awareness of potential risks. Its basic premise was that every working vehicle or plant has an exclusion zone, or ‘bubble’ around it that no site worker should ever breach, in case they suffered a collision while at work. SiteZone enforced that exclusion zone or ‘bubble’, with audible and visual alarms to warn vehicle/plant operators and the workers on foot around them that they might collide with each other.

However, vehicle/personnel collision continues to be a real threat in many sectors. Health & Safety Executive (HSE) statistics suggest that proximity awareness is often absent when personnel are working in close vicinity to vehicles and plant. For example, if we look at a very high-risk sector such as waste and recycling; between 2017 – 18, the HSE statistics show that being struck by a moving vehicle accounted for 27 per cent of fatal injuries alone, while 32 per cent were caused by being struck by moving machinery.

Wherever there are large plant vehicles and people working and moving around in confined spaces, the risk of a collision is waiting in the wings. It’s the ultimate breach of personal space.

Making the bubble smarter
DBB has proven to be a success, but there was room for even more improvement, so SiteZone Safety has transformed the bubble into a ‘smart’ one. This was achieved by listening to clients’ feedback and integrating it into the technological evolution of the system.

The patent pending SmartBubble was created as a range of solutions, designed to enhance the performance of the SiteZone PWS in whichever environment it was being used. These solutions have bespoke capability, so improved, automatic collision avoidance safety performance can be created for each client’s specific needs. It’s not a ‘blanket’ approach, but targeted, based on the specific site, machinery and users in question.

The original solution works by activating alerts when someone walks too near to a vehicle being driven or operated on site. An audible and visual alarm warns the operator. A further warning is given to any ground personnel via their wearable tags fitted to their hard hat or sleeve, to let them know they’re too close to the vehicle in question. When alerts occur, both driver and pedestrian will know that there is a risk of collision; therefore, both parties can take appropriate action. However, SmartBubble makes proximity warning detection even more accurate. 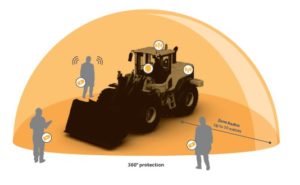 What makes it smart?
In a nutshell, it enables automation of authorised approach to a plant vehicle. That means it monitors a machine to determine if it’s static and in a ‘safe state’. In which case, the exclusion zone surrounding it is reduced, allowing people to work around the machine without the proximity alarms activating. As soon as any vehicle safety features are disengaged, the exclusion zone reverts to its previous settings.

For example, we often hear from site managers that the PWS activates when the machine is in a “safe state”, reducing the system’s efficacy. It means that workers and plant operators are forced to stop and assess the situation to make sure no one is in danger, even when none exists. This can be disruptive. A SmartBubble solution alters the PWS to integrate with machine functions, including the dead man’s handle (dmh), predominantly found on excavators.

Switching any machine on and off repeatedly will damage it over time. So, the SiteZone Safety engineering team designed the PWS to work with a dmh, which puts the vehicle in a safe state. This is specifically relevant when the excavator is static, and personnel may still have to work or walk around it. Therefore, when the operator re-engages the dmh, the SiteZone Safety ‘bubble’ expands again – the breach alarm zones are re-activated.

This latest development takes protection to a new level by automating such safety elements of the collision avoidance process. The machine driver/operator doesn’t have to physically engage, disengage and re-engage the SiteZone PWS system depending on the plant status; it’s executed automatically.

What are SmartBubble’s benefits?
The principal benefit is that it makes personnel/vehicle collision prevention more efficient. It prevents any disruption of operations on site by enabling the PWS to detect even more precisely than before. So, when the alarm engages, workers really know that there’s an issue demanding specific attention, and not the alarm just detecting nearby tags within the safety radius, as per its intended function.

Personnel can work or move around any stationary vehicles in a safe state, (i.e. not currently operating, none of its extendable parts moving) without setting off the proximity warning alarm. While the machine or vehicle is in a safe state, the proximity warning alarm is automatically disengaged, so it doesn’t distract workers by making them think they are at risk of collision with it.

When used in conjunction with the OverSite telematics system, which capture data from the proximity warning system in real time, the lower risk breaches can be distinguished from higher risk ones.

SmartBubble technology ensures that there’s no risk of the ‘crying wolf’ syndrome on site, and when your SiteZone alarm alerts, it’s definitely time to take action without questioning. 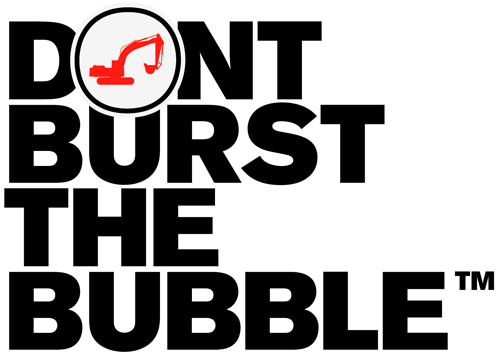