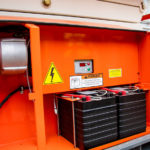 Snorkel | The power of good

In the quest for Net Zero, lithium power is reaching new heights. Snorkel examines the technology and its increasing range of solutions.

Lithium-ion battery technology has become increasingly common in our everyday lives, to be found powering everything from our mobile phones and laptops to hand tools, e-bikes and even hoverboards. However, as we focus on achieving sustainability and net-zero emissions targets, the use of lithium-ion technology is expanding from consumer products into a viable alternative to diesel in commercial and industrial products and applications.

This product development is being driven by increasing customer demand for cleaner, greener equipment to replace diesel-powered units, particularly for use in urban areas with low emission zones, or where jobsite emissions regulations are in place. When compared to equivalent diesel-powered models, the lithium-ion powered versions deliver zero CO2 emissions, zero dust generation, and up to 62 per cent less noise.

The batteries used in Snorkel products come with an integrated battery management system (BMS) which controls the batteries and maximises efficiency. It is a low voltage system, meaning it does not require specialist high voltage training for any servicing requirements, and has been tested in climatic chambers between -25°C and +60°C.

The overall operation of the lithium-ion battery-powered machine remains largely the same as a diesel machine, but with zero emissions. The lithium-ion powered lifts also benefit from higher torque, which delivers higher gradeability for enhanced performance on rough or uneven terrain, versus the diesel models.

In addition to lithium-ion batteries being maintenance-free, the electric motor used on Snorkel’s lithium-ion range is also maintenance-free. When compared to the equivalent diesel-powered lifts that require regular servicing and maintenance, such as frequent oil changes, filter changes, and occasional repairs, this represents a significant reduction in maintenance time and costs. In studies conducted by Snorkel, a lithium-ion battery powered lift reduces servicing costs by up to 93 per cent each year, when compared with an equivalent diesel-powered model, helping to minimise total ownership costs.

What are the environmental benefits of lithium-ion battery power?
With an electric drive motor and functions, lithium battery-powered machines produce zero CO₂ emissions, which means that these lifts meet emissions regulations and can be used in zero emission or low emission zones where combustion engines may not be permitted and can be used indoors. Battery power also eliminates the possibility of fuel spillage.

These lifts also reduce dust generation in low emission zones and green cities. Lithium-ion lifts do not have an engine fan, and therefore create less dust than machines with combustion engines. This results in safer and cleaner operation that is ultimately friendlier to the environment.

The use of lithium-ion batteries and electric motor also reduces noise by up to 62 per cent compared to a diesel engine. This means that lithium-electric machines are suitable to work in environments where there may be noise regulations, offering the possibility of working longer hours in urban or residential areas, where out of hours noise restrictions may be in place.

What should you expect from lithium-ion battery-powered lifts?
Depending on speed and usage, lithium-ion powered Snorkel lifts are designed to perform up to a full work shift on a single charge. Lithium-ion batteries generally are fully charged in around 5-8 hours, depending on the model, and can also be top-up charged as needed to maximize productivity, such as during a lunch break. All Snorkel lithium-ion powered lifts come equipped with a standard on-board charger, and for environments where constant operation for long periods is required, optional off-board fast charger units are available.

Higher torque, higher speeds and higher gradeability deliver powerful rough terrain, four-wheel drive capabilities and impressive gradeability up to 50 per cent, depending on the model, meaning that lithium powered lifts have the same or greater rough terrain performance than their diesel equivalents.

Lithium electric Snorkel lifts are also equipped with a digital proportional joystick to provide improved operator control and efficiency, when compared with equivalent diesel models. Using the digital output to control the motor directly results in more tactile and responsive acceleration for noticeably smoother performance and an improved operator experience.