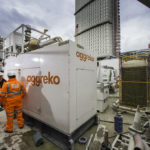 There is no one-size-fits-all solution when considering the construction industry’s move towards a net zero future. However, one potential option open to the sector is using alternative fuels to power on-site equipment. Yet while the general category of ‘sustainable fuels’ is generally understood as a greener option, there remains much confusion around the practicalities and what this precisely means.

Earlier this year, the Chancellor of the Exchequer announced that the UK Government would scrap the red diesel fuel subsidy for construction firms from 2023. This legislation has had a profound effect on the construction industry, with the identification of new fuel sources for on-site generators now a key priority. However, any thoughts on new fuels are overshadowed by the UK Government’s decision to pass into law the target to reduce greenhouse gas emissions to ‘net zero’ by 2050.

Limited options
This legislation, which was passed following recommendations from the independent Committee on Climate Change (CCC), has had a profound effect on the construction industry. Put simply, site managers cannot treat sustainability as a secondary concern for site managers – it is now a priority, and steps must be put in place to decarbonise in line with net zero targets. Add to that a general desire to improve air quality in city centres and it is clear that construction companies need to take immediate, pragmatic steps to reduce emissions. Minimising nitrogen oxide, sulphur dioxide, carbon monoxide and particulate matter emissions produced by on-site generators is a vital part of this but purchasing new generators that run on more sustainable fuels is expensive, as is adapting existing equipment.

The drop-in fuels
While technologies, such as more efficient and flexible engines, hybridisation, storage and control systems may offer solutions in the future, action is required in the short-to-medium term. Consequently, when faced with these regulatory changes and the need to decarbonise, construction company stakeholders may consider sustainable drop-in fuels as an immediate and pragmatic potential option.

Contrary to myths about the suitability of drop-in fuels for existing equipment, switching to these fuels does not require businesses to change or adjust their existing generators. As such, they represent a key alternative means of powering future equipment, and it is vital that solution suppliers take the lead in sourcing, testing and offering drop-in fuels that can be used with as little disruption as possible.

For example, specifiers can opt for generators that run on greener drop-in fuels, such as hydrotreated vegetable oil (HVO). Though drop-in fuels have previously come under criticism over the sustainability of their sourcing, HVO does not contain dilutions of fossil fuels, unlike regular biodiesel and synthetic diesel, otherwise known as Gas To Liquid, or GTL. Instead, it produced from a wide array of vegetable oil and fats via hydrogenation – that is, treatment with hydrogen. Unlike the esterification process used to create biodiesel, hydrogenation involves the removal of all oxygen from the HVO. As such, it can be stored for far longer without the risk of contamination, which has been an often-highlighted criticism and limitation of drop-in fuels.

Depending on sourcing, HVO also produces markedly less carbon emissions than traditional fossil fuels, and as hydrogenation removes water, sulphur and impurities, it is a scientifically ‘pure’ fuel that is more consistent in definition and quality than regular biodiesels. Crucially, unlike conventional biodiesel, which is often used as a part substitute, HVO can completely replace diesel in existing generators, without the need for adjustments or modification. Unlike other more sustainable fuels, it also requires comparatively less energy to heat, making it more efficient and high-performing than biodiesel.

Ricardo testing
However, in order to gauge the sustainability of HVO, it is vital that generator suppliers carry out stringent testing on their own equipment, but this course of action remains a rarity. Aggreko, however, recently engaged the support of global engineering and environmental consultancy Ricardo to independently test the performance and green credentials of their own generator fleet when running on this drop-in fuel.

Ricardo therefore carried out testing on a selection representative of 80 per cent of Aggreko’s generator sets with output ratings ranging from 30 to 500 kVA and all using engines certified at EU Stage IIIA emissions. Each unit was sequentially tested over the five modes of the ISO8178 D2 Cycle, the international standard for exhaust emission measurement for this class of non-road, constant speed equipment.

Each generator’s emissions were assessed based on operation on a standard pump-grade EN590 diesel product, alongside HVO. By measuring emissions and providing a chemical analysis of each fuel, testers could determine a ‘carbon-balance’ fuel consumption. This testing produced results that demonstrated significant emission improvements when the generators were running on the more sustainable biofuel.

Specifically, when compared to pump-grade diesel, HVO produced up to 42 per cent less particulate emissions, up to 35 per cent less carbon monoxide, and hydrocarbon and NOx emissions were lowered by up to 25 per cent. Consequently, Aggreko can confirm the viability of HVO as a sustainable fuel for its existing generator range, enjoying emissions reductions with a comparatively small to negligible fuel consumption penalty – a factor that has hamstrung uptake of other sustainable fuels.

In conclusion, the adoption of more sustainable technologies in the construction sector is vital to improving air quality in city centres, and keeping companies in line with net zero targets. Drop-in fuels such as HVO offer a clear and immediate way of doing so, while bucking preconceptions about the efficiency, sourcing and storage issues associated with these solutions.

0 0 0 0
Previous : CityFibre awards £1.5 billion construction contracts across 27 towns and cities
Next : GT Trax invests in their rental and transport fleets