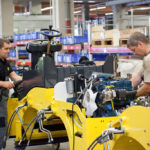 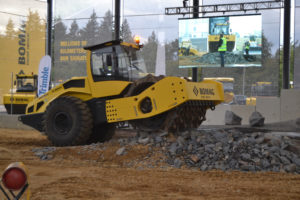 It is time to hit the road with the Bomag Innovation Days. Construction Plant News attends one of the highways industry’s biggest events, where both machines and key trends take centre stage.

Road construction and repair is a crucial driving force in UK infrastructure spending, and the smart motorway concept has been accelerating the demand for the necessary machines still further. Bomag, with an extensive portfolio of products across the entire road life cycle, is ideally placed to meet that demand, and has the pedigree to prove it. In 1957, for example, it was this manufacturer who first developed the concept of compaction through vibration. Fast forward 60 years and a company owned by the Fayat Group since 2004 can now boast a range like no other, from a 55kg tamper up to a 55 tonne refuse compactor, with solutions in not only compaction – where it is firmly established as number one in the world – but asphalt application, cold milling, road maintenance, stabilisation, recycling and more. Indeed, given that its French parent company is itself an active user of the equipment, the business is intimately acquainted with the challenges both OEMs and end users currently face.

That’s why, when it invites the big beasts of the black top business to come to its Boppard home, hundreds from around the globe will answer the call. A production facility that spans 70 football fields sees a solution for just about every application roll from multiple assembly lines, and the Bomag Innovation Days demonstrate many of their benefits to an eager and expectant audience. It is also a chance for the Rhineland-based manufacturer to prove it is setting the trends that others will follow, with developments in digital construction, autonomous machinery, alternative drive solutions, and low emission solutions all much to the fore.

Pioneering technologies are the common currency at Bomag. The first ride-on compactor, the BW200 emerged from Boppard drawing boards soon after the firm began trading. The world’s first recycler for stabilising ground and rejuvenating roads would follow in the 1970s, whilst the following decade would see the introduction of a polygon drum that would allow deep compaction of ground of up to 4 metres in one pass. The geo fencing, GPS controlled and object detection enabled Robomag – already a sensation of Bauma – is a machine that can be utilised completely autonomously in a defined work area and follows in that tradition. When it goes into full production, and is combined with the likes of Asphalt Manager and Variocontrol – which will automatically take into account ground conditions and adjust compaction accordingly – it will optimise compaction operations, whilst simultaneously recording all the necessary documentation to prove it. 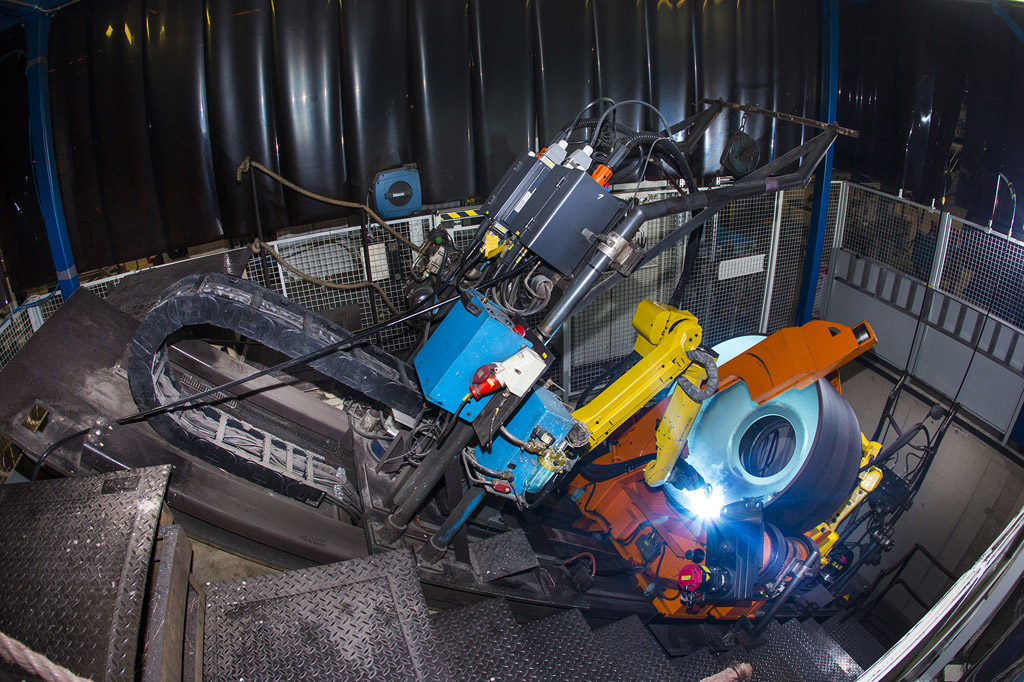 Across the construction plant sector connectivity is becoming one of its guiding principles and Bomag has been an early champion. In the past, the correct level of compaction has often been at the mercy of an operator’s judgement, but with the full suite of Bomag tools more informed decisions can be made. The likes of the latest generation, Asphalt Manager2 and Economizer avoid over- or under-compaction, improving efficiency and helping to prevent future failure. Moreover, in maintenance and repair a Remote Service Assistant represents worldwide, cloud-based support that connects an expert from Bomag to a customer, reducing travel costs and downtime into the bargain.

It would be fair to say that the kind of digital technologies that have become staple tools for jobsite managers on the continent are less common in the UK, but times are changing. Building Information Modelling (BIM) requires a 3D twin of the project and for that to be in any way accurate machine data is required. Moreover, under pressure from a tightening public purse, Highways England is looking to its suppliers to champion new methodologies, and manufacturers like Bomag can help. With stakeholders increasingly demanding evidence of a job well done, its Bomap system allows you to upload all of the data the machine generates, including asphalt temperature, or compaction values across the entire site. Not only that but, because it carefully regulates the number of passes required, the job can also be completed up to 20 – 30 per cent quicker, with fewer hours on the machines. Moreover, an android-based technology will manage mixed fleets, and not just Bomag machines.

The Asphalt Pro Family brings these technologies together in a holistic approach. In order to determine how many machines or trucks might be required, simulations can be run even before the job gets underway. Once the project is in full flow, real time analysis, scheduling and documentation are all further functions at your disposal, controlling the likes of material consumption – and your costs – with a greater degree of accuracy.

It’s not just at the level of digital integration that Bomag is determined to expand its customers’ profit margins but also in engineering and design. On its recyclers, operators can make use of the FlexMix system, for instance, where the speed of the rotors can be adjusted according to the ground conditions. That means the same job can be completed with a machine running at a consistently lower RPM, saving fuel and wear and tear. On other machines, Eco Mode will adjust engine output according to usage whilst Eco Stop goes still further. Often a roller on site could only be working for 40 per cent of the time the engine is running, but with the latter the power is automatically cut off to eradicate such wastage. 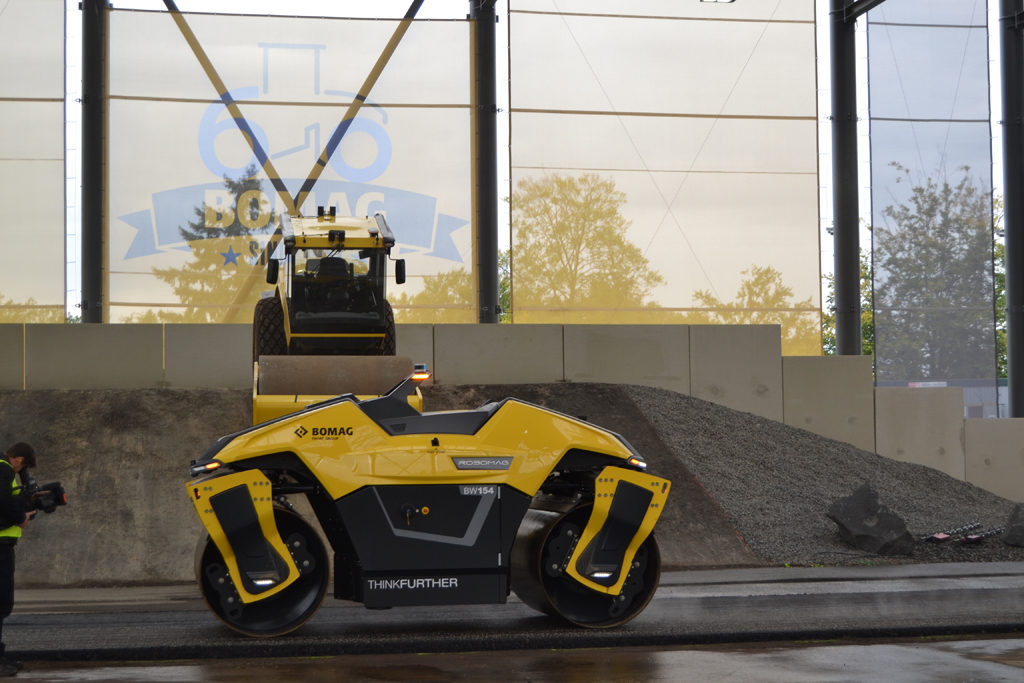 Public health and the environment are now embedded at every level of our industrial processes and road construction is no exception. The dangers of particulate matter from diesel engines are now well-documented, but there are many other applications that can generate problematic dust levels, including cold milling. Bomag’s answer is the Ion Dust Shield, a system which is so successful in filtering more than 80 per cent of the potentially harmful material, that it will undoubtedly become a mandatory feature of the industry in the years ahead.

Similarly, clean diesel is still the order of the day, with Stage V units making huge strides, but alternatives are emerging. That’s why Bomag’s asphalt compactors will include a mix of LPG, electric and hybrid units, the latter making use of a hydraulic system that will reduce the load on the internal combustion engine (ICE). With the launch of the BS 120 G, the popular 1.2m-wide drum class machines can now be powered by the same gas cylinder technology that industry is already well accustomed to in fork lifts. The unit maintains the same price point as its diesel compatriot and allows a run time of five hours. Give that there are no particulate emissions, and minimal NOx output, it is a concept that could well find favour in ultra-low emissions zones. If you want zero emissions, however, the four lithium cells and two electric motors on the BW 120 AD-e will power the machine for 1.5 hours, with a recharging period of the same time. Although still dependent on an on-site power supply for charging, it is a technology that could find its place in more confined applications, such as tunnels.

“We offer a choice of drivetrains depending on the customer requirements,” explains Jonathan Stringham, Head of Strategy Marketing for the Bomag Group. “LPG, for example, can be an intermediate technology before a future move to electric. If there is no reliable charging source on site then the BW 120 G LPG model is presently more practical, than electric. Operating times are similar to a diesel, refuelling is simply a matter of changing a gas canister, whilst the initial investment is broadly similar to an ICE unit.” 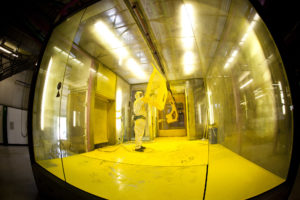 The Bomag factory is not just an assembly line but an engineering hub that transforms sheet steel into finished machine, and is in the privileged position of being in command of the vast majority of the production process. All of its drums are fabricated on the Boppard site, for example, as are the cabs, and chassis. As a result, quality can be maintained, and costs controlled, whilst there is an enhanced degree of flexibility in changes of design. Just some of the statistics prove the worth of these machines in the wider world. Over 135,000 pieces of light compaction equipment are built by the market leader in the field every year, for instance, whilst 13,000 drums are produced over the same period.

2018 was a record year for Bomag, with €830 million in turnover generated by 2,500 employees across 150 countries but it’s Innovation Days are indicative of a company that is determined to continue that journey. They are an opportunity for the road construction community to come together and for a manufacturer to hear not just what its customers need, but also feedback – both positive and negative – on units already in use in the field. “Only by listening to our customers can we develop the products that our customers need,” concludes Jean Claude Fayat, “and that’s why the Bomag Innovation Days are so important.”