Green Biofuels is championing the use of its GreenD+ Hydro-treated Vegetable Oil across a whole swathe of construction plant applications. Construction Plant News Editor, Lee Jones explores its potential.

For all the noise that surrounds the onward march of electric and hybrid machinery it is worth considering that we still used 34 billion litres of diesel in 2019 alone. Whilst alternative powertrains will be our ultimate destination, in terms of numbers, the internal combustion engine remains the reality, and in many heavy-duty applications it’s still the only game in town.

At the same time, a clean air crisis – and climate emergency – isn’t going to wait for the economics of making the switch to alternative powertrains to make more sense before it makes its considerable presence felt. What is required, then, is a transition technology and Hydro-treated Vegetable Oil (HVO) is steadily staking a claim as one of the main contenders.

“We were actually involved in a separate renewable energy venture and bought some HVO in the form of GreenD+ from Green Biofuels to use on that project,” recalls William Tebbit, “and we were amazed by its performance.” William, and his business partner Magnus Hammick liked it so much, in fact, that they bought the company. That was in 2017 and the pair now operate as Chief Executive Officer, and Chief Operating Officer respectively.

HVO is a renewable and sustainable fuel that – crucially from the end user’s perspective – does not require any modification to the machinery. All that an excavator engine recognises is an exceptionally pure hydro-carbon but with a significantly reduced CO2 footprint and level of emissions. Not content with what are some already some very impressive sustainability credentials GreenD+ advances the concept still further, as William explains: “The Green Biofuels team has developed its own additives package that is specifically tailored to HVO, which elevates the performance to a level which we believe is the best in the market. Essentially, it improves the combustion performance of the fuel, squeezing out every ounce of energy you can muster, and further reducing the level of particulate emissions in the process.”

Unlike many traditional bio-fuels, as a paraffinic diesel manufactured to a recognised EN 15940 British Standard (BS), there is a guaranteed consistency in the quality of supply. Not only that, HVO is much cleaner than bio-fuels plant operators might have previously experienced and drops straight into any diesel engine. The developers of GreenD+ can point to independent data that reveals immediately achievable CO2 reductions of up to 90 per cent, whilst its properties make it particularly well suited to use and storage on a construction site. According to the DEFRA definition it is 100 per cent biodegradable, for example, doesn’t flower on water – so will not produce a slick – and it’s odourless. As a result, when it comes to handling and logistics considerations there are significant benefits, and with the continuing advance of clean air zones in our towns and cities, it can be used anywhere. 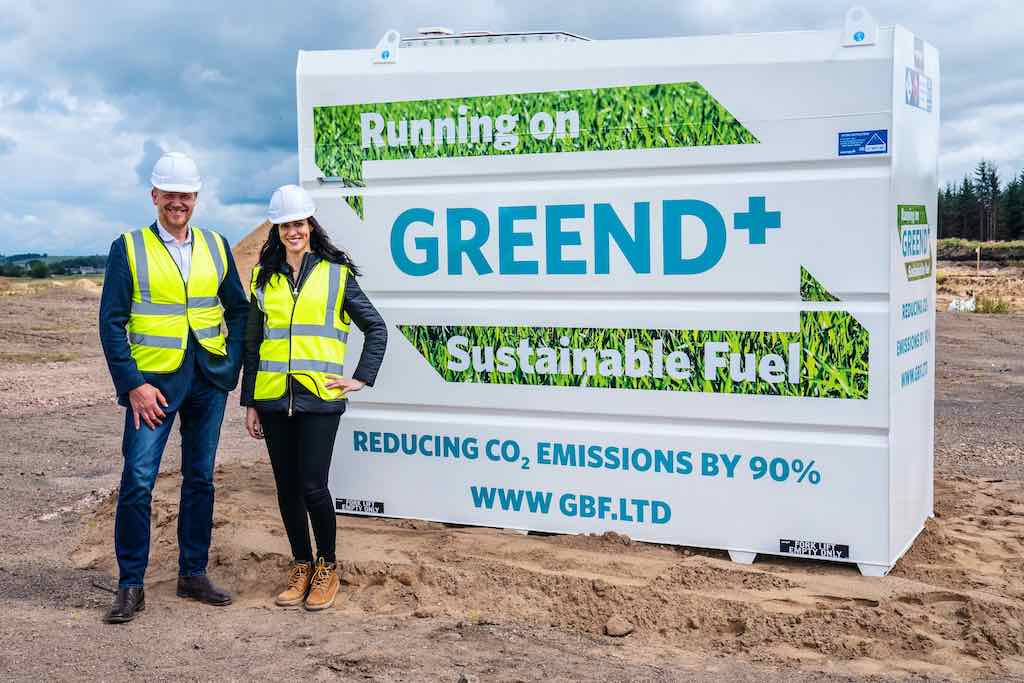 Driven by legislation, the R&D departments of the major manufacturers of diesel engines have transformed the cleanliness of the most advanced powertrains, and the latest Stage V units are a world away from their distinctly dirty predecessors. GreenD+ HVO can, however, still improve on the emissions of these latest powertrains, whilst providing a more dramatic impact on the performance of older pieces of construction plant that do not benefit from the latest technologies. For a smaller contractor who might not be able to transition to the most advanced powertrains, HVO offers environmental gains without unaffordable capital expenditure.

Green Biofuels can already count some of the largest contractors in the country amongst its customers, and its client base is growing. Indeed, the company calculates that use of GreenD+ HVO in the construction industry over the past twelve months has already positively impacted local air quality through reducing NOx and particulate matter and, in addition, has resulted in a saving of 25,237,175kg of CO2.

The potential on some of the large infrastructure schemes that are on the horizon, or already under way, is even greater and HVO is attracting a steady stream of converts as a consequence. If you take the example of HS2 and its supply chain, for instance, vehicle movements, fuelling construction equipment, and powering generators is projected to use over 500 million litres of diesel over five years. GreenD+ reduces NOx emissions by up to 30 per cent, and air particulates by up to 85 per cent, and saves 2.82kg of CO2 per litre of diesel being replaced. Through substituting regular fossil diesel with the use of GreenD+ HS2 CO2 emissions could be reduced by 282,000 tonnes per year or approximately 20 per cent.

The advanced fuel that Green Biofuels is championing is a solution to both sides of the climate change equation. By reducing NOx and particulates it can contribute to an improvement in local air quality, whilst it can also play its part in the battle against global CO2 levels. “We believe GreenD+ HVO is a transition technology,” concludes William. “It can be used with off-road vehicles, on-road transport, and energy generation, and allows companies to demonstrate their commitment to environmentally-friendly practices to their own clients. As an illustration, if you’re tendering for work from local authorities then the use of HVO is more than a tick in a box, it has an immediate positive impact and is well suited to use in and around rivers, canals and coastal defences, or outside the school gates or our hospitals.”

Moreover, given that many battery-powered solutions are still reliant on power from a National Grid that is dependent on fossil fuels, it could be argued that it is currently the cleanest option available. Clearly there are multiple options coming down the line, but GreenD+ is an answer that works on every level here and now.”