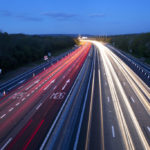 Highways England’s roadmap is for connected autonomous plant to be standard by 2035. Construction Plant News investigates the industry body’s initiative.

The unique pressures of road construction, where time on the network is limited and remedial work will cause damaging further disruption, makes time the most precious of commodities. That’s why Highways England has been challenging its supply chain to find innovative new ways to deliver the miles of new black top that make up the arteries of our economic well-being, and its Connected Autonomous Plant (CAP) roadmap is integral to that strategy. The 15-year plan hopes to see driver-less plant operating as standard by 2035, a development which the government company estimates could accrue up to £400 billion in productivity improvements, and drastically reduce accident rates.

Autonomous machinery is not new, of course, with mining and quarrying operators making use of the equipment for many years. On Highway England’s own A14 upgrade between Cambridge and Huntingdon, in fact, a driverless ADT was recently trialled. Undertaken in partnership with contractor CA Blackwell, the unit was utilised in a controlled environment, programmed remotely to follow a pre- determined route, with the capability to detect and avoid obstacles. Highways England committed £150,000 from its Innovation Designated Fund into the A14 initiative in the hope that the industry can make more informed decisions about the safety and productivity benefits of this class of equipment. As a result, it is the judgement of its organisers that CAP can free up workers for more skilled tasks, improve safety and allow the machines to run round the clock, thereby reducing the length of time roadworks are on the ground. 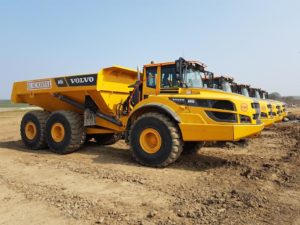 Highways England sees the A14 trial as the first step on a much more ambitious journey, one that could, by their calculations, reduce fatalities in the sector by 37 per cent, and cut considerable sums annually from project costs through efficiency savings. Not only that but the technology could be deployable in up to 47 per cent of construction activities currently performed.

If those numbers don’t impress then there is also a prodigious list of accident and occupational health issues it can address, from slips, trips and falls, to fatigue, lone working, muscle-skeleto disorders, hand-arm vibration, occupational deafness, falls from height, and injuries whilst handling, lifting or carrying.At the same time, the adoption of CAP could see the role of operatives on the jobsite change radically. It could welcome a remotely working and more diverse workforce that could include those with disabilities, for example, and develop skilled personnel that can control or direct plant on or off site.

The early adoption of autonomous plant will be defined by the existing availability of technology, and what is considered to be ‘autonomous’.The roadmap discusses areas in which autonomy is already being introduced, such as compaction, and the movement of materials. Developed as a technological study, BOMAG’s geo fencing, GPS controlled, and object detection enabled Robomag is a fully autonomous tandem roller. Unveiled at Bauma 2019, the unit has been integrated with the manufacturer’s already available Asphalt Manager systems to deliver a completely driver-less and connected vehicle.

The Volvo Autonomous Solutions’ 15 tonne capacity TA15 hauler runs on a battery-electric drivetrain, with its automation system utilising GPS, Lidar, Radar, and multiple sensors. Recently collecting a Red Dot Award accolade for product design, being autonomous, the unit has no need for a cabin, which makes for a dramatically new machine profile.The TA15 forms part of the wider TARA autonomous transport solution concept, where, for maximum loading and hauling efficiency, a series of machines can be connected together to form a ‘train’.

It is in these repetitive tasks along relatively predictable routes where its early adoption is viable, but in terms of the application areas in which equipment has not yet been developed, the roadmap suggests that a review is undertaken of the key needs of the industry to understand where most benefit (safety, financial, environmental etc.) will be brought, so that a technology development strategy can be established to deliver the systems that will provide the greatest benefits. 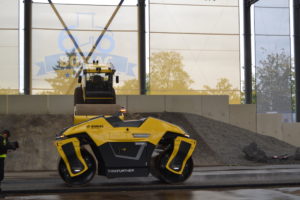 There are, of course, barriers to the acceptance of any new technology, not least in construction, where a complex and often fragmented supply chain needs to consider contracts and commercial models as well as new kit. Plant hire companies need to have the confidence to invest in modern vehicles, contractors need to get through the learning curve and training will also be an issue. It is, however, important to remember that we are not moving to a fully automated world overnight.

The roadmap argues that as we start to adopt a greater degree of remote control, connectivity and then gradually autonomy – and as the benefits become clearer – some of the anxiety should be overcome. Highways England is confident that the shift in its contracts towards an alliancing model will help to create a contractual environment that allows for more innovation on its projects. In terms of true research and innovation, it is utilising the SBRI (Small Business Research Institute) contracts and competitions to identify new solutions, whilst it also supports an active programme of academic research to look at some of the longer term issues.

It should equally be recognised that the obstacles are not just technical, and in many sectors the technology already exists, but it is the issue of liability that continues to cause concern.Who is ultimately responsible if an accident does occur? The roadmap seeks to address these apprehensions by including a work stream that will initially define liability boundaries and then enact legislation if necessary.As we move to a digital design, construction, operation and maintenance regime, discussions are already being held with the Highways England standards division to understand how standards may need to change