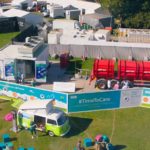 As the industry seeks viable alternatives to diesel, recent years have witnessed a rush to battery powered solutions, but there is a school of thought that hydrogen may well be the better long-term bet. Indeed, technologies that utilise what is the most abundant element in the universe are already relatively mature, and the leaders in the field are taking the concept still further. In what has been described as a construction industry world first, for example, an industrial hydrogen fuel cell system, deployed by Siemens Energy, and developed by its partner GeoPura, is providing combined heat and power to the National Grid’s Viking Link site.

“Essentially, our aim is to make the technology usable in the real world,” explains GeoPura’s Andrew Cunningham, “and that could be either a construction site, the events sector, or wherever stand-by and off-grid power is required. GeoPura is dedicated to researching and developing renewable fuels, and we want to industrialise hydrogen fuel use, from generation and production, through distribution, and finally to the end user. The Viking Link is a good example of that process.”

The National Grid’s Viking Link Interconnector project in Lincolnshire won’t have a grid connection for at least six to eight months. In that time the lead contractor on the project, Siemens Energy has installed a hydrogen fuel cell system that will be able to supply a peak power output of 250kVA of standard three phase, 400V electricity and up to 80kW of heating to around 20 cabins across the construction village. These will contain site welfare provision and offices, whilst the power to six electric vehicle charging points will also be provided. 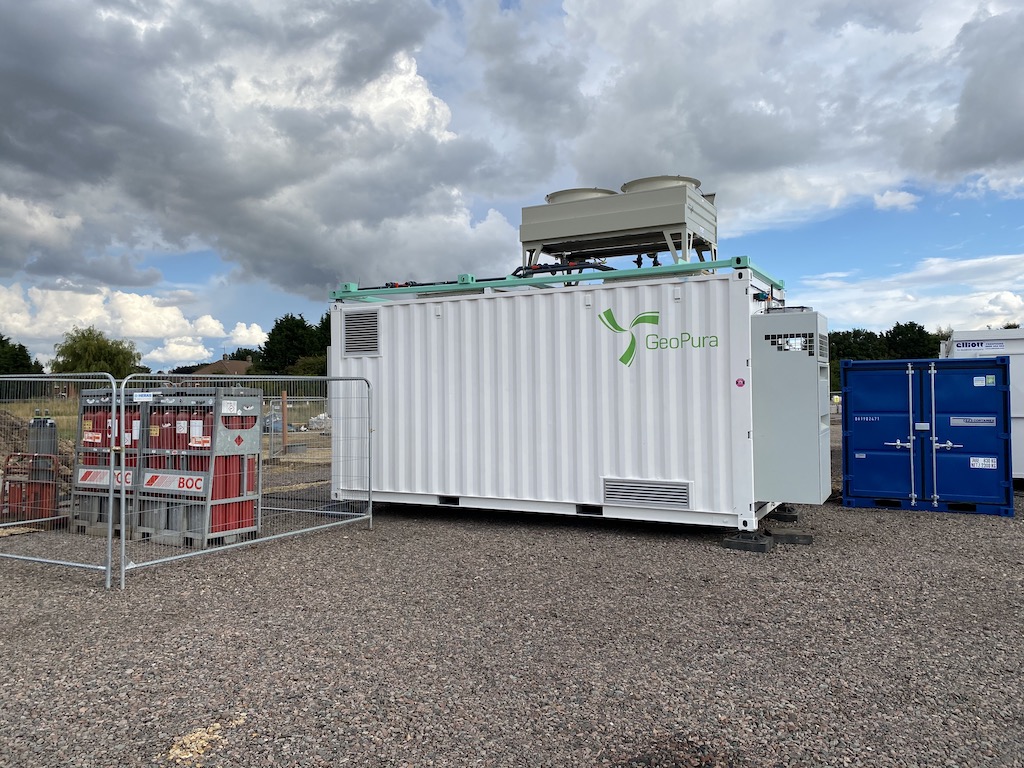 Critically, from the site managers’ perspective, there is no need to adapt their processes. Where previously they would be filling a box with diesel, the GeoPura unit is being fed with hydrogen from a gas bottle – which then generates electricity. As a result, a recognition of hydrogen as a solution for the here and now is what Siemens Energy’s Ian Wilkinson is at pains to promote. “Viking Link is a practical application on a commercial basis, which replaces diesel with hydrogen, and removes the emissions from the equation. We’ve actually made use of a fuel cell that was designed originally for automotive use and wrapped a whole system around it. That includes 216kWh of battery storage to cover peak demand – and bridge any possible interruptions in supply – and a power distribution network.”

Not only that, but the GeoPura system makes use of the waste heat that is normally lost from the fuel cell’s cooling system. This waste heat is passed through an exchanger to heat water, which is then used to heat two drying rooms for the site workers’ personal protective equipment (PPE). GeoPura offers a range of hydrogen system solutions, backed up with a full-service package, which includes maintenance and fuel supply. In this instance, the fuel cell is housed in a 20ft shipping container, with around 300 metres of reusable piping installed at the site to distribute that hot water to the cabins and drying rooms.

Hydrogen is admittedly a more expensive proposition at this point in time simply because – when compared to the well-established supply chains that exist for the delivery of traditional hydro-carbons – the same level of infrastructure is not yet in place. That will change as the market develops, of course, but the real and immediate benefit is the elimination of CO2, NOX and particulate emissions. The only by-product, in fact, is water, with the added advantage of much reduced levels of noise, and no risk of environmental contamination through leaks. By using green hydrogen on the Viking Link project a tonne of CO2 will be saved each week, which is the equivalent of taking 20 cars off the road.

Whilst that offers an immediate synergy with the likes of ultra-low emission zones, or where a contractor is required to demonstrate their environmental credentials, there is equally no barrier to a hydrogen solution being adopted wherever diesel gen sets are currently in use. “There are more and more problems with planning consents for developments in relation to their environmental impact,” explains Andrew. “Not only that, but it’s becoming increasingly unacceptable to turn up at a location and run a polluting diesel generator for a few days, which is why we certainly wouldn’t be trying to aim this at a particular sub-sector. This is an answer for everyone.”

Hydrogen fuel cells have been with us for some time but unfamiliarity with the technology has hitherto limited their adoption. What is certain is that the age of burning is coming to a close and, with the government already committed to net zero by 2050, choices will have to be made as to how we deliver ourselves from our addiction to fossil fuels. The systems championed by GeoPura and Siemens Energy will undoubtedly play their part. Not only do they generate clean, renewable energy, their scope or operation goes far beyond any battery solution, where charging times and weight consideration renders them unsuited to large pieces of construction plant. “We can certainly see a time when fuel cells replace the internal combustion engine,” concludes Andrew, “and it is actually a development that all our futures might depend on.”

0 0 0 0
Previous : Elliott invests in the future with over 2,200 new fleet additions
Next : AMI Group | Ford Ranger stolen in the dark of the night recovered