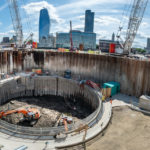 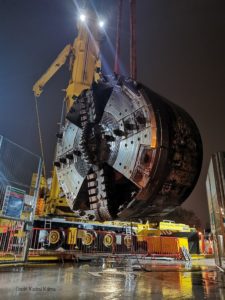 As the government promises a renewed focus on infrastructure, Construction Plant News Editor Lee Jones reports on the progress of the civil engineering leviathan that is snaking a path beneath our capital.

There are some construction projects that just can’t call a halt, and one such is certainly the Thames Tideway Tunnel. When the lockdown came two tunnel boring machines that were carving a space for London’s £5 billion super-sewer had to keep turning until they could find a safe place to stop, and these are just a couple of examples of a collection of sophisticated and often giant machines that are making this complex project possible.

“Prior to the pandemic we were on schedule, but with a four-week shutdown, and then subsequently operating at 70 – 80 per cent productivity, that will have to be reassessed,” explains Richard Lewis of Tideway.“At present we’re roughly about halfway through the build, with tunnelling progressing past that point by March. When you’re operating in the heart of central London, along the line of one of the world’s major waterways, logistical issues quite literally come with the territory, and we’ve had to overcome any number of challenges, and the pandemic is certainly one of them.”

The Victorian sewers of Sir Joseph Bazalgette rescued London from the curse of cholera, and similar waterborne diseases but, like so much of our 19th century infrastructure, they were struggling to cope with 21st century demand. At the time of their construction, they were sized for a population of just two million, where now this great metropolis numbers more than eight and counting. The new 25km tunnel will capture the sewage that is presently running off into the river and instead safely transfer it to the Beckton works for treatment.

“Essentially we have to pick up on the existing spill points, so the route of the tunnel is predetermined,” continues Richard.“That has required the building of cofferdams to create our own land, from which we can then begin to construct the underground infrastructure. Huge amounts of sheet piling has been installed in order to then backfill, using jack up barges and 160 tonne Liebherr cranes, equipped with piling rigs and vibratory hammers.”

The Thames is teeming with residential and commercial life, which demanded consideration for the effects of construction on neighbouring properties.That why the project has made extensive use of the Giken silent and vibration-free piling system, where a patented ‘Press-in Method’ eliminates excessive noise and allows for operation on restricted sites. In addition, noise suppression blankets and barriers have been utilised wherever possible.

Of the five drive shafts from which the tunnel is accessed, Chambers Wharf, near Tower Bridge, is the only example sited on one of those cofferdams.The tunnel build is split into three geographical areas – west, central, and east – and the different methods required in each locale speaks eloquently of the project’s complexity. Shafts that lead into the tunnel at central and east were of a diaphragm wall construction, for example. It is here that Hydrofraise technology from Bauer has been employed. A suspended, rotating cylindrical cutterhead churns through the ground to the required depth. At the same time, a special material is pumped into the void to stop the walls falling in before concrete is introduced to create the shaft wall.When that wall is complete the earth within the diameter is then excavated. 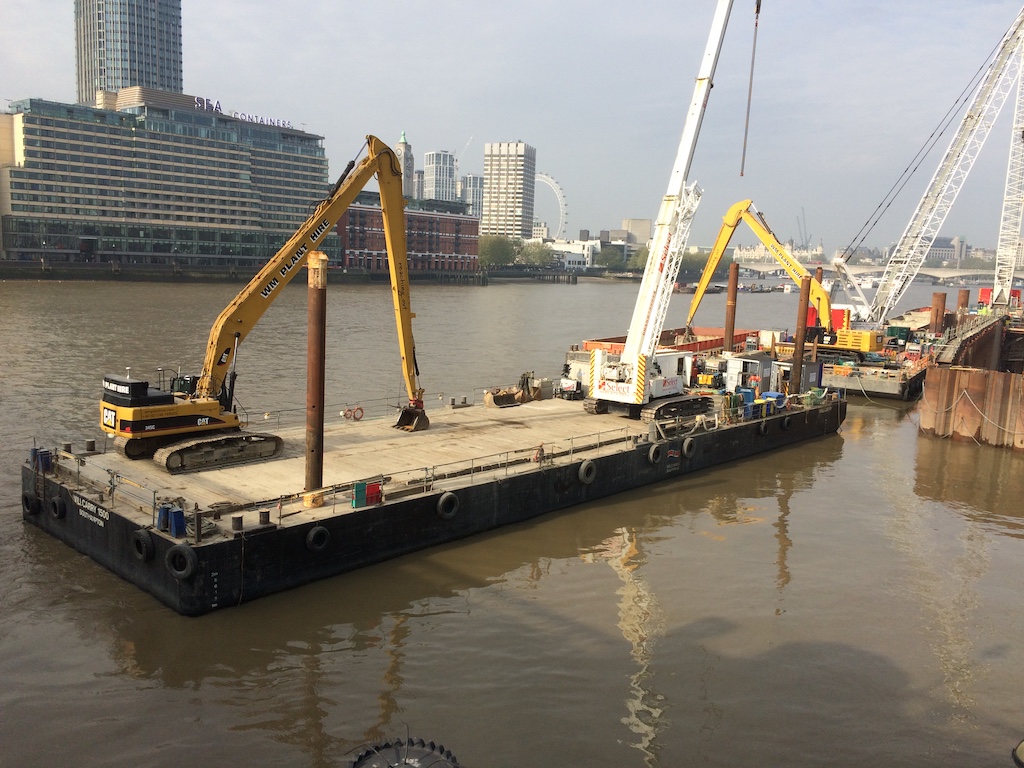 At the Earl Pumping Station in Lewisham, Bachy Soletanche utilised innovative cutter soil mixing technology to sink the 60m deep shaft into hydrocarbon-contaminated soil without polluting the surrounding chalk aquifer. It is an approach that would win the joint venture of Costain, VINCI Construction Grands Projects and Bachy Soletanche, the Brownfield Redevelopment Project of the Year trophy at the Ground Engineering Awards 2019.

“We’re making use of some substantial pieces of equipment where getting them to site and lowering them into position is a far from a simple proposition,” add Richard. “That’s why we’ve insisted on making use of the river wherever possible, with all of our spoil going out and materials coming in by that route. Indeed, over 3 million tonnes of material has been shipped out along the Thames to date, whilst a tower crane sited near the MI6 HQ was actually delivered and assembled from the river, using a crawler crane.”

The power-houses amongst these giant machines are the six tunnel boring machines (TBMs) whose disc-shaped cutter heads slice away the soil of the main shaft and two connecting tunnels at the prodigious rate of up to eight metres a day. In their wake they deposit the concrete segments that make up the walls, whilst excavated material is carried away by conveyors, much of which is destined for the RPSB reserves at Rainham Marshes.

Tideway has made use of the lessons learned from Crossrail in how to minimise road traffic, public disruption and improve safety, with many of its key staff moving from that project across to the tunnel build.At the same time, it has insisted on stringent emissions standards, whilst its emphasis on river transport also cuts emissions from construction vehicles.

“This is probably the biggest single marine construction job the capital’s seen in modern times,” concludes Richard. “There are 21 sites running simultaneously and everything from the depths we’re working at to the volumes of spoil is incredible, and all that whilst ordinary Londoners are largely unaware of our existence.” Indeed, when the project is complete, the capital’s residents will not only have a sewer system fit for the 21st century but the cofferdams that the Tideway workforce has created will become brand new green spaces for the public to enjoy. Beneath them the work of the heirs of Bazalgette will be inconspicuously playing its crucial role in their daily lives. 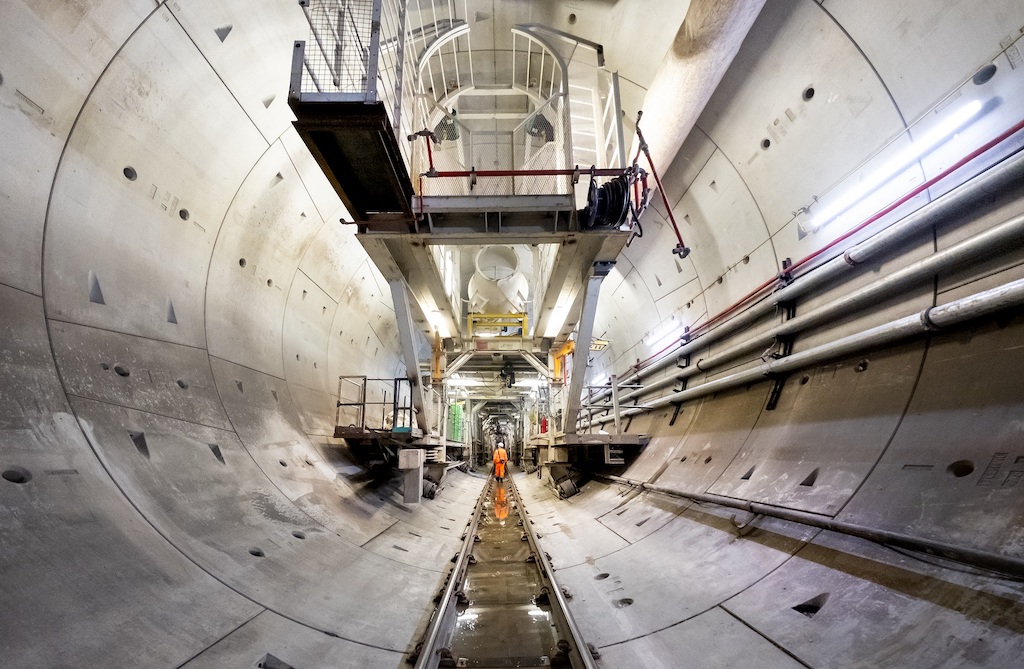