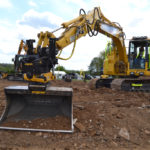 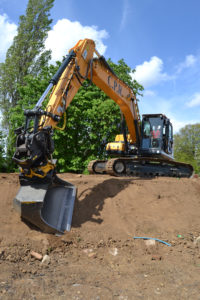 There are pieces of equipment for which there is simply no substitute to a live demonstration, and the Tiltrotator certainly falls into that category. A technology which is now gaining ground in the UK market, has for many years had an able champion in Engcon, and the manufacturer’s dig days, the third of which was recently held over two days at Wicksteed Park in Northamptonshire, are a showcase of some of the productivity gains that end users can earn. It’s an opportunity to get prospective customers in the seat and show then exactly what’s possible and, judging from the often evangelical praise of converts to the concept, it is an approach that is working.

Nearly any size of excavator, from 1.5 to 33 tonne, will benefit from the addition of a tilty, a fact ably demonstrated at the Engcon event. The EC204 on a 3.5-tonne Sany SY35U zero tail swing mini, for instance, is suitable for the 2 – 4 tonne weight class and was directly mounted on its machine with an S40 Quick Hitch. The majority of Engcon’s sales, however, make use of a twin hitch system, with the flexibility of the latter set up allowing end users to remove the tiltrotator when using hydraulic hammers, in digging very narrow trenches, or when maximum break out force might be required.

The EC204 can equally be fitted with the manufacturer’s proportional control system, DC2, which allows the operator to control up to six functions at one time. DC2 also provides the end user with the reassurance of in-built remote support. Simply download the Engcon app onto your smartphone, and one of the company’s engineers can access the likes of error codes via the mobile network, and interrogate the health of the unit, thereby reducing downtime. If the problem can’t be fixed remotely then a much clearer idea of the issue can be ascertained before the operative visits that site, ensuring that they are equipped with the right parts, for instance. 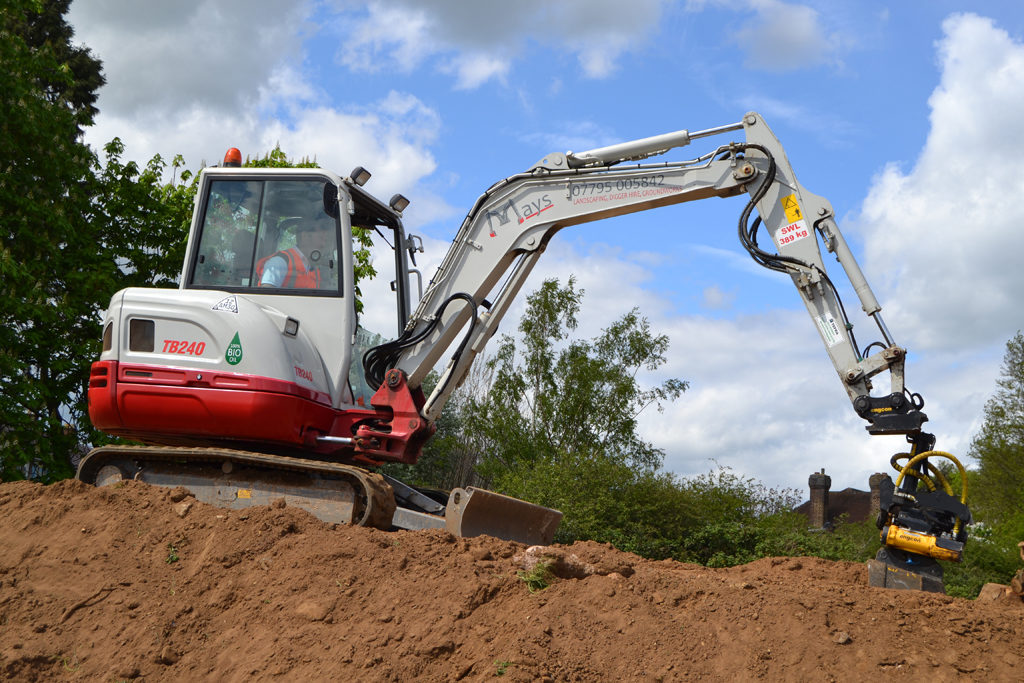 A company making use of just this size of tiltrotator was on hand at the Engcon Dig Day to share its own experiences. When you’re working in Sites of Special Scientific Interest (SSSI) you’ll need to tread with a lighter and more considerate step, and that’s just what Owen Mays and his expert team at Mays Environmental Plant, are adept at undertaking. “By running on bio oil, for instance, all of our machines are set up to for that kind of work, and the Engcon tiltrotators also play their part. We now run four Takeuchi excavators, a 1 ½ tonne micro, and a 2 ½, 4 and 10 tonne, the last three of which are equipped with tiltrotators, and I wouldn’t operate a digger without one on now, to be honest. I’d say that we can get a job done at least 30 – 40 per cent faster, but it’s not just the productivity gains.”

Given that they are working on environmentally sensitive ground, significantly reducing the amount that the machine will need to be repositioned clearly has its advantage, as Owen explains. “It means we only need to make one trackway into the site and, because we’re using quite a lot of timber bog mats, we can often complete the job from just one of them, or pick the mats up and move them without changing attachments.” Of course, whilst some of Owen’s contracts might be at the more specialised end of the spectrum that doesn’t mean that tiltrotators can’t benefit end users in the mainstream, as his own experience can testify. “We’ve just taken on a groundworks job for a housebuilder, and arrived on site with the Takeuchi TB240. The main contractor immediately saw the benefit of the tiltrotator, and asked us to bring in our 10 tonne as well. As a result of the gains in time we were making with our two tilty equipped units, they were able to off-hire two other machines. Not only that, when they realised that our machines are equipped with pallet forks, they were also able to dispense with the rough terrain forklift they had on site, all of which added up to a considerable saving on that project. It’s certainly opened quite a few doors for us, because we can do a lot more with fewer machines on the job.”

Whilst some contractors might still baulk at the additional cost, especially on a mini excavator, for savvy operators like Owen it’s simply a question of doing the maths. Fewer labourers undertaking manual tasks, and less machinery equals immediate gains. Add to that a reduction in wear and tear, and potentially fewer hours on an excavator as a consequence, and residual values could also be enhanced.

Further up the size scale at the demonstration day is the EC 219, rated for excavators up to 19 tonnes. It is equipped with the Engcon QS 60 Quick Hitch featuring the manufacturer’s Q-Safe system. Now standard equipment on all tiltrotators for six-tonne excavators and above, contractors can take confidence in a three-pronged level of protection. Firstly, sensors will detect when one of the pins has contact. When the quick coupler makes contact with the first pin a visual and audible alarm is triggered, whilst slew functions are restricted. These alarms will then continue until the attachment is locked on both axles. Moreover, a valve will stop the hydraulic cylinder from opening in the event of hose damage, whilst exterior springs also keep the hitch locked. With the addition of EC-Oil, which is also now standard with any tiltrotator supplied with the DC2 control system, adding attachments can also be done from the comfort of the cab with no manual intervention from the operator.