Located on the River Eamont at the northern end of Lake Ullswater in the Lake District, the village of Pooley Bridge is a popular tourist destination, named after the bridge constructed there in the 16th century. Following the destruction of the village’s eponymous landmark by Storm Desmond in 2015, Cumbria County Council has commissioned a new bridge, which is currently under construction by Eric Wright Civil Engineering (EWCE).

The village has been served by a temporary road bridge for the past five years, but this has been removed and replaced by a temporary footbridge to enable EWCE to construct a new permanent structure. The new stainless-steel bridge has been prefabricated off-site for modular construction in four sections and will be the first of its kind in the UK.

The over-pumping requirement
Although the debris, and most of the remains of the historic bridge, were cleared during the clean up after Storm 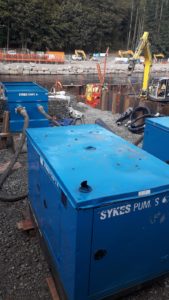 Desmond, the existing bridge abutments were still in place and had to be demolished to make way for the new structure. Consequently, an over-pumping solution was required from the early stages of the project to create a safe working area for this demolition process.

Once the old bridge abutments had been removed, the need for a reliable over-pumping system remained, to enable the EWCE team to install a coffer dam, which involved excavating to a depth of 2.5 metres below the water level. This was installed to create a dry working area for construction of the new concrete abutments. Once the coffer damn was in place, the role of the over-pumping solution was to prevent any water ingress to the dammed work area – or breaching of the coffer dam due to rising water levels – at any time during the programme. This not only supported health & safety best practice for the EWCE team, but also ensured that the integrity of the new abutments wasn’t compromised during construction.

As the area is prone to heavy rainfall, and the work was carried out during the winter months, a flexible system that could cope with variable flow rates was essential because, due to the high water table, any breach of the coffer dam could have quickly caused it to flood.

The solution provided also had to take into account the environmental demands of working with natural water courses within the Lake District National Park, and ensure any water discharged back into the River Eamont met Environment Agency requirements.

Efficient and eco-friendly solution
Sykes Pumps began by carrying out a site survey to fully understand the topography of the location, the construction 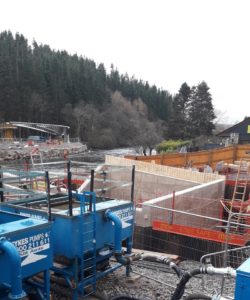 programme and the over-pumping requirements. Two 4” Super Wispaset 100 diesel pumps were supplied to site, each with a maximum flow rate of 45 litres per second. Located on the River’s east bank, the fully-bunded and noise-attenuated pumps have a noise profile of just 58dBA at 7 metres and were specified to provide efficient continuous operation when required, while minimising the project’s environmental impact. The pumps provided sufficient capacity to cope with any leaks in the coffer dam and prevented the risk of it being breached, while protecting the local environment from fuel spillages and keeping noise levels down to avoid disturbing local residents and aquatic life.

Both pumps operated as duty pumps, and remained operational on a 24/7 basis, and the EWCE team was able to top up the pumps’ integral fuel tanks to avoid the need for any additional fuel storage on site.

Ensuring that the project protected the local environment, water quality and natural habitats was an important part of the brief, so the solution specified by Sykes Pumps included filtration of the extracted water before it was returned to the river downstream. The water extracted from the river was pumped through a dedicated Sykes Silt Away unit for each pump. This equipment has been specifically designed to separate suspended solids and sediment from water by filtering it via a Lamella plate-box and allowing any solids to drop into a collection chamber below. This compartment can then be emptied at ground level without interrupting the continuous operation of the pumps or the Silt Away unit. The filtered water can then be tested before being safely discharged.

For the Pooley Bridge project, a rock pool filter bed was also put in place as an additional layer of filtration after the Silt Away units, and from here the water was transported further downstream via hose, to be released well away from the work area.

If you want to watch a video of how the Sykes Silt Away unit works – as well as its features and benefits, click here