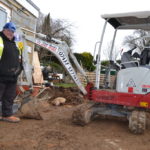 Takeuchi | One man and his digger

Mark Palmer-Broughton’s faithful Takeuchi TB216 is a breed apart, according to its owner.

If as an operator you’ve learnt your trade on excavators of 20-tonne and upwards – and can point to more than 15 years of experience at the controls – then the more diminutive class of machine should be yours to command. For the last three years Mark Palmer-Broughton of On Your Marks Plant Hire has been digging out the footings for extensions, excavating swimming pools, and undertaking all manner of landscaping and small building works. Previously, however, he has worked on units anything up to 80 tonnes in size, and that gives him invaluable insight into the power, versatility and performance of his Takeuchi TB216 – not to mention considerable prowess at the driver’s seat.

“I bought my first Takeuchi to do some extra work of my own on weekends,” recalls the Berkshire-based owner/operator, “and things just really took off from there. There’s a lot more demand for mechanised solutions on even the smallest jobs now because builders have recognised just how quickly you can complete the works and move on to the next. When they hire me they get a very experienced digger driver and a machine as a single package. I’ve been working alongside a friend of mine, landscaper Christian Light at CJ’s Garden Maintenance for the last few years and, whether it’s that kind of job, driveways, levelling, or more substantial swimming pool projects, there’s so much a digger of this size can do.

From his own knowledge of the excavator market Mark new that Takeuchi was the brand he wanted to invest in when he was setting up his business, and it’s proven to be the right decision, with his current TB 216 the second unit he’s owned from the Japanese compact plant specialist: “It’s a superb machine and I don’t think there’s anything else like it on the market,” he continues. We caught up with Mark and his 1.6 tonne unit on an extension in Newbury where he was digging the footings for a 4metre extension, as well as removing the spoil for the foul drainage connections. Mark bought the TB216 from Takeuchi dealer, CBL last year and it’s been in daily use since, even during the darkest days of the lockdowns. Indeed, Mark reports that he has been even busier during the pandemic as many home-bound property owners look to maximise their living space and enhance outdoor areas.

So what is it about Takeuchi that appeals? “The thing that really stands out is the digging power that’s at your disposal from a relatively small unit. The expandable and retractable tracks are a very useful feature as well. Fully extended they provide a good deal of stability when excavating and, when pulled in, you can make your way through a 1metre wide gateway, whilst the reach is very good. It’s a very comfortable machine to use and to be seated at – even for long periods – with all of the controls falling easily to hand. Not only that but I know from when I sold my first Takeuchi that the residual values are excellent and was actually very pleasantly surprised by just how much I got for a second-hand digger. Unlike a lot of SME contractors I’m in a position where I’ve driven a lot of mini excavators in my time and there isn’t really anything to compare to this Takeuchi.”

Mark opted for the canopy, but the 1.6tonne Takeuchi TB216 is also available with a cab, whilst as an additional security feature dealer CBL fitted a tracker to his model, and the unit is further protected by the CESAR Datatag system. The hydraulically retractable track frame moves from 900-1,300mm, with a longer than average track frame of 1,520mm further improving stability. There’s an impressive maximum reach of 4,090mm, a maximum digging depth of 2,390mm, whilst two-speed tracking means the unit can easily tackle challenging terrain.

Mark has enhanced the versatility of his Takeuchi TB216 with a range of attachments, including a 150, 300, 450 and two 600mm buckets, a grading bucket and a grab, all of which can be easily transported on his trailer with 3.5 tonne towing capacity vehicle. “On this job, we took down the existing utility room using the grab attachment, and we’ve then dug the footings for an extension that will extend 4.2metres from the existing property, and it’s only taken a few days, with five lorries loads of muck away taken out in that time. On other projects I’ve done some dredging work on a silted up stream and have also used the Takeuchi with the grab attachment to lift beams for concrete flooring.”

Mark reveals that much of his recent work has been in footings and his digger will make short work of the standard 600mm wide, 1.2metre deep trench for an extension. “The boys on this job had to dig out a section where there was a water pipe running across and that took them nearly two hours, whereas for me it would have been ten minutes with my digger. The only advertising I do is through the On Your Marks Plant Hire Facebook page, and most of my work is word of mouth, and that keeps me more than busy. The service and support from CBL has been first class and the reliability of the machine can’t be faulted.”