With a heritage that already spans over sixty years, and more than 800,000 machines sold worldwide in that time, Manitou is well placed to map a path to a more sustainable and productive future for construction plant operators. Indeed, this French manufacturer with a global reach is positioning itself as a full solutions provider, with the machine, its attachments and service – the latter including finance, warranty, connected machines and spare parts – all coming together as a holistic package. In the UK the customer base is already substantial – second only to Manitou’s home market in terms of size, in fact, and it is a position which the company is determined to consolidate.

Clearly, the modern world’s underlying imperative is for environmentally friendly products, but is going down the electric avenue always the right road? Application, regulatory compliance, duty cycle and usage should be the questions being asked in the process of coming to a sustainable answer, not to mention the right size of machine for the task, and that’s why, when it comes to powertrains, Manitou is championing a mix of solutions, each designed to suit the job in hand. A choice of clean diesel, hybrid and full electric technologies will be complemented by components designed to draw less power, and a smarter use of the available energy. 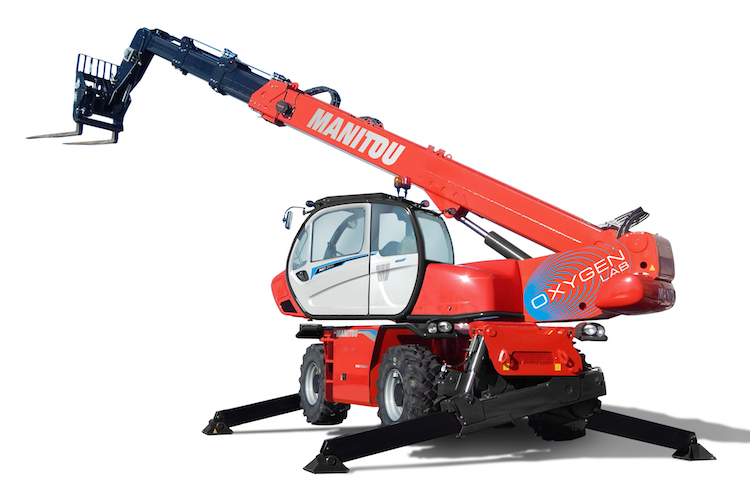 This is an ethos that is reflected in its latest product launches, with Bauma the setting for the new Stage V compliant MT 420H. With urban and brownfield sites in the UK becoming ever tighter its features are likely to be much in demand and, at just 1.49m in width, this is an exceptionally compact unit, which is complemented by a muscular lift capacity of 2,000kg and 4m lift height, whilst a new redesigned boom head and fork carriage has increased the visibility to the forks. The MT733, 933, 1033 have a new Stage V Deutz 75hp, with the MT1033 benefitting from an increased load chart on stabilisers compared to the previous model. MT1135, 1335, 1440, 1840 Easy, have also got a new Stage V Deutz 75hp engine along with a new bonnet increasing visibility, along with the EasyStep cab for easier access, and Harmony display for clearer and simpler controls. All models still feature Manitou JSM joystick allowing operation of the boom with one control lever.

With residual value a crucial factor in the plant hirer business model, customers will see value in the Eco-Stop function, currently available on 11 – 18m models. This shuts off the engine when idling at a point that can be adjusted by the end user, saving fuel, reducing maintenance costs and potentially decreasing the number of hours worked. A typical telehandler in service in Europe will currently run up between 600 – 700 hours of service in a year. Since machine depreciation is inextricably linked to those hours this could equally have a positive impact on its resale price.

Manitou is not all about telehandlers, of course, because there’s a substantial aerial work platform portfolio as well. 80 per cent of its customers in that market are rental firms, and part of an expanding and disparate market that demands the highest levels of reliability and service. 2018 saw a 16 per cent increase in AWP sales and, in order to capitalise on that growth, Manitou is adding to what is already a very extensive product range. Not only that, but a €26 million investment will see a brand new production facility open in 2020. The 16metre remains the most popular size in Europe, quickly followed by its larger 18 metre sibling and both the articulated jib units with these reaches have seen significant recent enhancements.

The new 16metre 160 ATJ and the 18 metre 180 ATJ will conform to Stage V emissions regulations but, thanks to a downsized 18.5kW Kubota engine, that is achieved without a DPF. Despite that reduction in power modifications on hydraulic management will maintain performance, whilst rough terrain capabilities have been improved, and both units also feature “the new 160/180 ATJ have a STOP/Start technology which can automatically stop the engine after a set period of no operator input and can restart the engine upon pressing the presence pedal in the platform – Ecostop on the MT models can switch off the engine only after a preset period of time”.

Bauma was also the stage for the unveiling of a pioneering initiative that it promises will be a breath of fresh air for the industry. Its Oxygen label champions green energy and low noise solutions that, in an age of air pollution concerns, will inevitably find their place amongst the low emissions zones of our urban centres. Crucially, Manitou is placing reduced total cost of ownership (TCO) at the very heart of a concept that demands an alternative to diesel on either a continual or temporary basis in zero emission mode.

Those machines under the Oxygen banner are of the here and now, and include the 100 per cent electric, 20m 200 ATJ e. Equipped with a 48V battery with enough charge for a full working day, the performance remains identical to its internal combustion engine (ICE) counterparts, but with a substantially reduced TCO. With more than 90 patents filed and eight R&D centre worldwide, Manitou has a long tradition of innovation. The drawings boards of Ancenis were the birthplace of the rough terrain forklift in 1958, for instance, and, more than six decades on, they are now delivering a new generation of low carbon solutions.

Oxygen Lab is the designation for the prototypes in the process of being developed, and includes the MRT 2550 h. The MRT 2550 h Oxygen Lab is a hybrid prototype capable of operating in 100 per cent electric mode, that will maintain the same characteristics as its diesel-powered sibling, including a 25m lifting height and 5t capacity. The battery can be recharged by the Stage V engine, and, when running on electric power, thanks to its low noise and zero emissions, it can be utilised indoors, on urban sites or at night.