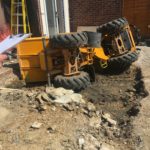 One hirer has been closely monitoring the safety performance of its compact plant and the results should be a lesson to the industry at large. Construction Plant News Editor, Lee Jones talks to Frank Elkins of Travis Perkins about his mission to improve digger and dumper safety.

As with so many problems in this world, when it comes to on-site safety the first and most difficult step is to recognise there’s an issue that needs to be addressed. That’s just what Frank Elkins of Travis Perkins has had the courage to do, and he is inviting the industry as a whole to make its own contribution to his initiative. Indeed, it is his direct experience of a personal tragedy that has inspired a conviction to find a solution. “Like the vast majority of organisations in our industry we take health and safety incredibly seriously,” declares the builders’ merchant’s Chief Operating Officer, “and I believed that we were doing a pretty good job. At the same time I knew that diggers and dumpers will occasionally tip over, with operator error almost always the cause of these accidents. If you deem the hand-over processes that are already in place are robust enough to mitigate many of those incidents, then there could be an assumption that it’s ultimately an end user problem.”

What stirred Frank to question that supposition was a tragic tipping incident which resulted in fatal injuries when a dumper rolled over. “We had done absolutely everything we were supposed to do, but it just wasn’t enough. It was at that point that I decided we need to join forces with the industry to do everything we can to prevent accidents like these from happening in the future. Initially we decided to investigate the scale of the issue within our own company by fitting tip and tell technology to our 1 tonne dumpers and diggers – and what it exposed genuinely shocked me.”

The research revealed that, on average, for every thousand Travis Perkins hires there were nine dumper, three mini excavator and one micro excavator tipping incident – figures which equate to around one tip a week on a mini digger or dumper. A cursory examination of the data might lead to the assumption that it is the inexperienced ‘weekend warriors’ rather than trade professionals that are to blame, but further analysis proved that the majority of tips involved the small builders and contractors who should be fully conversant with the risks, and well-versed in operating the machinery.

“I don’t believe that this is just our problem,” continues Frank, “and the lone voice of Travis Perkins won’t be enough to fix this. I believe that the hire industry needs to gather data and share its experiences to ensure that we are doing everything that is reasonably practicable to prevent these accidents.” The Hire Association Europe is supporting Travis Perkins in its campaign and four working parties have been set up to confront the issues that its findings raise.

“I would challenge other hirers to ask themselves how many tipping incidents they might have in their business? We then need to think about what else we can all do to inform people of the risks of using any piece of equipment, and what can we do to help improve those procedures? Could we insist that watching a short video that illustrates the risks is part of the hand-over, for example?” The forward tipping site dumper is a class of equipment that has been viewed as problematic in a safety context for some time, especially when fully laden, but it is the larger units that have hitherto been the focus. As a result, the 6 – 9 tonne units have seen improvements to visibility through changes to the geometry of the machine, and the addition of cameras or collision avoidance systems.

It is Frank’s contention that manufacturers should also be reviewing the safety of its most compact diggers and dumpers in relation to their stability in order to remove the possibility of tipping wherever possible. “When it comes to heavy machinery, if there is a perception of undue risk it is addressed by the OEMs, but are we monitoring smaller equipment closely enough to be aware of the dangers? I believe this is an issue that the industry needs to do something about because every single tipping incident can result in either serious injury or even death.”