Whilst advanced safety systems are obligatory on rail there is an increasing appetite for their adoption across the construction industry. After all, a technology that ensures that height, slew, rated capacity indicator (RCI) and stability are all controlled during operation has clear benefits on just about any building site, not least the compact urban sites that are becoming increasingly more 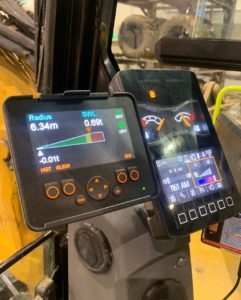 common. Throw in an easy to use interface, compatibility with telematics, GPS and proximity warning systems, and the appeal starts to get very broad indeed.

Through Fitzgerald Plant Services, Chris Fitzgerald and his team are already intimately acquainted with the rail sector, with major maintenance contracts in place with Network Rail. From the one man and a van operation that began trading in 2007, the south Wales-based firm now employees more than 70 people, including over 30 field service engineers, with the rest based at a substantial workshop facility in Cwmbran, where a full range of repair, rebuild and upgrade services are undertaken.

“When it comes to rail, we have considerable experience of the safety systems specified, and some of their limitations. Our ambition was to offer the whole of the construction sector a solution with increased functionality and many of those shortcomings eradicated. From our own fault finding and data analysis work with our customers, for instance, we found that up to 75 per cent of the call outs we were experiencing were as a result of a driver being defeated by the complexity of the system.

“The inevitable result is that they’ll either break it or alter the settings so that it appears as a breakdown. We had engineers report back to us that they’d seen height limiters accidentally engaged whilst the arm was on the floor and, of course, it couldn’t then be lifted. Our ambition was to deliver a solution for the construction industry as a whole that was simple for the operator to use, easy to fit, but with the highest quality hardware – and the result is Xwatch.” 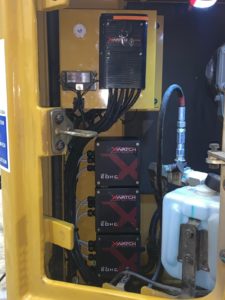 encountered? Chris continues: “The beauty of our system is that they don’t have to use it. It can unobtrusively sit in the corner of the cab until such time as it’s pressed into service, at which point it’s just question of a few button presses, you’re height and slew limiter is activated and you’re in business. With some existing solutions you could be required to press 30 and above buttons in order to get set up, which is not only time-consuming but equally prone to error.”

Not only can Xwatch be engaged and disengaged as required but its developers promise it is also extremely self-explanatory and intuitive. That is a concept which, since its launch in July 2019, has found a significant following, with over 200 units already sold. “When Xwatch was first introduced we gave it to some of our key customers to trial and perhaps the best testament to its success was that there was very little feedback. There were no breakdowns and no problems for the operators, so they simply had nothing to report – to put it simply, it just worked. We have also had support from significant players in the industry, such as Flannery Plant Hire, for instance, who have understood from the outset what we were trying to achieve.”

Those plant hirers and contractors have found favour with the scope of its usefulness, including a rated capacity indicator (RCI) function, which prevents tipping, and displays what load is on hook, whilst other innovations abound, as Chris explains. “We’ve mapped the software so we can make use of a proportional valve system. On all of the alternatives currently out there, when you hit a motion cut you come to a sudden stop. With Xwatch, the closer you come to that stop point the 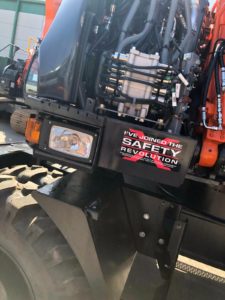 more the system slows you down. If, for example, you’re using an excavator for lifting, that will stop the load from swinging dangerously, whilst it’s much kinder on machine components.”

All of the software is written in-house by Fitzgerald Plant Services, and the beauty of the platform they have adopted is that it can be easily integrated with other systems. By combining with the latest RFID proximity warning solutions, for example, not only is the operator alerted to the presence of pedestrians on the in-cab screen, but it will also slow the machine down, increasing reaction times for all parties.

Moreover, Xwatch will ally with telematics technologies, allowing fleet managers to interrogate data and analyse the nature and frequency of either potentially dangerous incidents, or machine productivity rates. GPS and 3D machine control can work with Xwatch as can 360º camera systems. The Xwatch system can be retrofitted to any make or class of excavator, whilst Chris is in discussion with OEMs and dealers with a view to having a factory fitted option available – but the developments don’t end there. A new version will be introduced as a slew and height limiter for grab lorries, for example, a particularly useful function when working on highways projects.

Whatever the type of plant, or application, when engaged, Xwatch creates a virtual barrier around a machine, that protects not only the driver but anyone in their vicinity. Simplicity makes for less downtime, reduced levels of training, and a happier, more productive operator. “What we have developed is what we at Fitzgerald Plant Services would want from a safety system,” concludes Chris, “and given the experience we have with these systems that is the highest recommendation we can give it.”