Eurovia Contracting, a national highway infrastructure company, has taken delivery of the UK’s first 100% electric-powered Volvo ECR25 mini excavator. The zero-emissions, battery powered excavator has been chosen by Eurovia as it takes steps to deliver a significant carbon reduction programme throughout its business.

“We’re on target to achieve a 40% reduction in carbon emissions by 2030, which is very significant for a company that has a high degree of self-delivery,” says Matt Stubbings, Divisional Manager of Eurovia Contracting. “And the introduction of battery-powered machinery holds the key to achieving that goal.”

Supplied by SMT GB, the ECR25 Electric is currently the only battery-powered three-tonne excavator on the market. It is also Eurovia’s first electrically powered excavator, and also the company’s first Volvo excavator.

“We’re extremely excited to be at the cutting edge of zero-emissions technology with Volvo and SMT,” adds Matt Stubbings. “It’s definitely a game changer, and we can’t wait to add larger, more powerful zero-emissions kit to our fleet.”

The zero-emissions machine has been put to work in the centre of Macclesfield, Cheshire, on Castle Street’s pavement improvement works for Cheshire East Council’s Highways department.

“Battery-powered machinery is an ideal solution on urban projects like this, and everyone around will benefit from the noise reduction and zero emissions,” explains Dave Coleman. “Eliminating the smells of exhaust fumes is a huge benefit, as is a reduction in noise levels too. A low noise environment can also avoid the requirement of a curfew on working hours.”

The Castle Street project is one that will see the pavements widened and the carriageway narrowed on the 170m-long road, over a six-month duration. In addition to increased pedestrian access, the project will see tree pits, revised street furniture and new lighting installed.

“With so many shops and offices around the site, it’s important to keep noise levels as low as possible, to limit distractions,” he says.

The zero tailswing, zero emissions ECR25 Electric delivers the same performance and power as its diesel-engined counterpart. That’s because Volvo engineers have replaced the ECR25’s internal combustion engine with a maintenance-free, 48-volt lithium battery pack. This provides a 20kWh, 450Ah supply, to operate a permanent magnet electric motor, which is used to drive the mini excavator’s hydraulic system.

Peak motor power is 18kW, reducing to 14.7kW during continuous operation. This also enables the ECR25 Electric to offer switchable work modes, through standard, Eco and Boost settings via the in-cab screen.

Capable of working a four-hour shift on a full charge, the ECR25 Electric is available with two charging options; one is through a 16-amp power source which can fully charge the machine in 5 to 6 hours, and the other is through a 32 amp fast-charge solution that can achieve a full-charge in around 1 hour 15 minutes.

The ECR25 Electric’s arrival on-site coincided with the introduction of Eurovia’s electric gang week – a week-long trial of battery-powered machinery and vehicles.

All electrical power requirements for fixed and mobile plant are supplied through a Hussh Pod, hybrid power generator which offers 45kW of usable battery power.

“The Hussh Pod provides bulk storage of electrical power so the generator only runs when the Pod’s reserves drop to 20%,” he says. “When it reaches 100%, the generator automatically stops – the ability to store electrical energy has halved our fuel consumption compared to traditional power generation methods.”

Mr Coleman says that with battery-powered equipment, the team has had to adjust to new ways of working to make the most of available resources and charging facilities.

“As the Volvo’s power levels get low, the excavator is returned to the Hussh Pod in our compound,” he says. “This often coincides with work breaks, so the digger can be kept on-charge when not in use.” 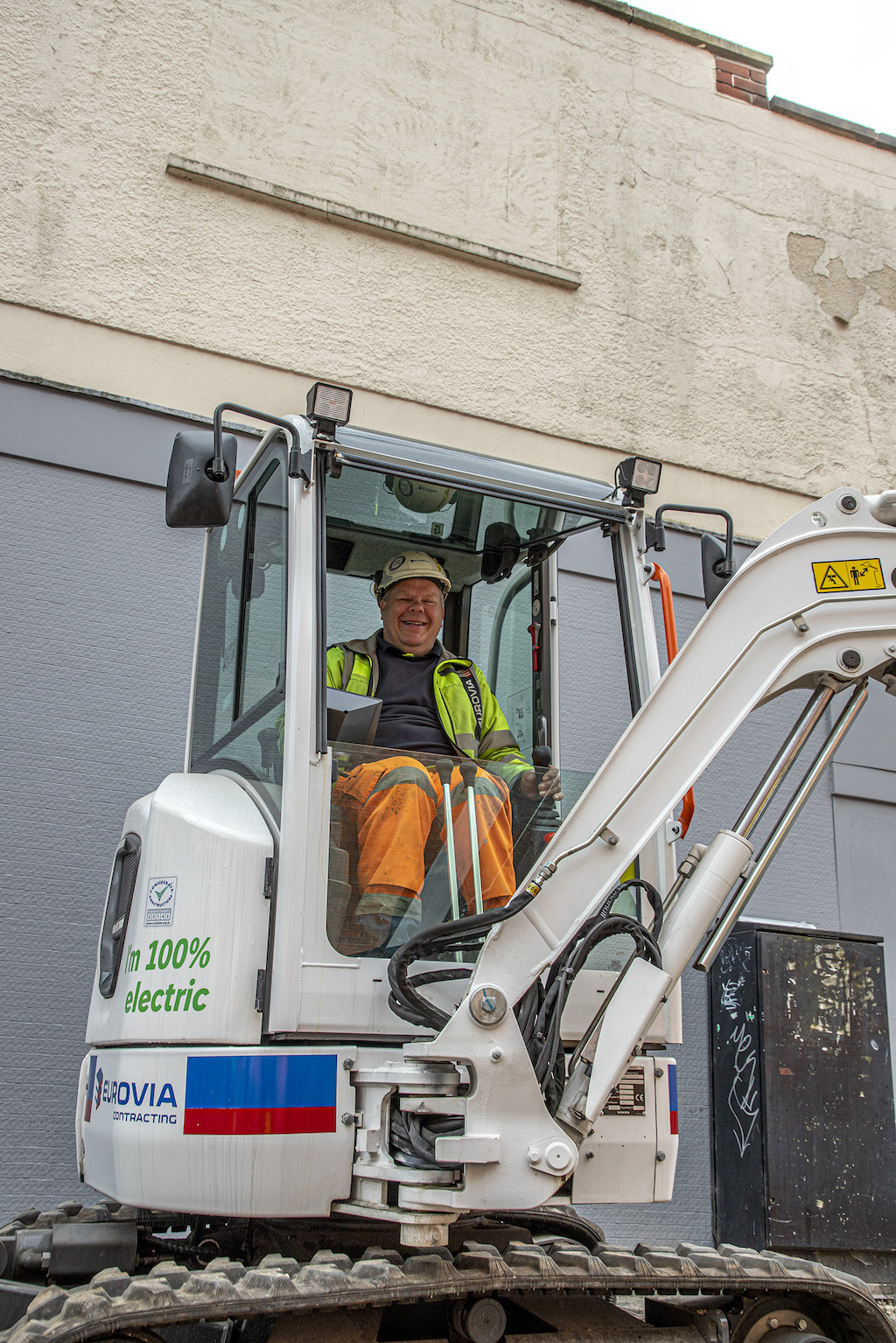 “It’s very quiet,” explains Ian. “But you need to keep one eye on the battery % until you get used to it – just like you do with a Smart Phone.”

He says that digging power is very good, but adds that the battery-powered digger brings a different experience to your ears.

“You do hear the electric motor and various hydraulic system noises – it’s just a different sensation to having an engine running flat out behind you,” he says. “The machine still has a throttle, and power consumption depends on how many ‘revs’ you choose to use.”

“It operates just like any other mini excavator, but without the noise,” he adds. “And instead of an auto idle, it will ‘power off’ if you don’t touch the controls.”

0 0 0 0
Previous : How to protect the environment when using generators and other plant machinery outside
Next : Mecalac | The French connection