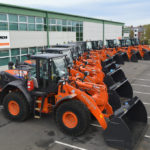 Following on from a successful demonstration day at the Renewable Energy Association (REA) event in early March, hosted by Jack Moody Group as part of the REA 25th year Anniversary, the company has invested in ten Hitachi Wheel Loaders including four ZW180-6’s, four ZW250-6’s and two ZW180-6 high lift machines.

Founded in 1963 by Jack Moody, the company has become one of the UK’s leading experts in the landscape construction, maintenance and environment industries.

In 2001 Jack Moody Group became the first company in the UK to achieve the BSI PAS 100 standard awarded by the Composting Association (now AFOR), as well as being designated a ‘Best Practice Site’ by WRAP, a government waste reduction initiative.

The Hitachi’s will be put to work at their multiple treatment sites across the Midlands, including Berkswell, Grendon, Telford and their head office at Hollybush. The sites specialise in the handling and processing of green waste, producing compost, and now also produce woodchip and biomass products.

Robert Moody, Managing Director of Jack Moody Group commented: “Our reasoning behind our purchase of Hitachi equipment goes back to 2017, where we had a ZW250-6 on demo. We committed to purchasing this machine and it has performed well in the last 3 years and the back up and service offered by HCMUK is exemplary.

Following a string of six contract wins in as many months we began the process of re-investing in our Wheel Loader Fleet. After performing a tender process during the lockdown period, we obtained multiple packages from number of suppliers and Hitachi offered the best package overall. We have been extremely pleased with the service offered by HCMUK. The ConSite telematics monitoring system offers site managers and directors good visibility of the operations and maintenance of the units.”

Mark Turnham, National Director of Sales & Marketing at HCMUK commented; “HCMUK are delighted that Jack Moody Group have chosen us to replace their current fleet of front-line equipment. Having purchased their first Hitachi Wheel Loader a ZW250-6 in 2017, this investment is a testament to the productivity and reliability our ZW range.”

0 0 0 0
Previous : Aggreko cleans up emissions with power of Stage V
Next : Manitou | All the right connections