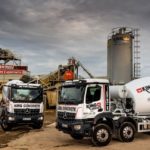 So impressed was King Concrete with Rygor Commercials’ quick-fire response to its first order for three Mercedes-Benz truck mixers that it has just signed-up for another.

The family-owned supplier of ready-mix and mix-on-site concrete is based in Croydon, Surrey, and runs a fleet of 17 trucks which is dominated by Daimler brands Mercedes-Benz and FUSO.

The line-up includes seven 32-tonne truck mixers, all bar one of which wear three-pointed stars. Those supplied by Rygor, however, were the first that King Concrete has sourced from a member of the Mercedes-Benz Trucks UK Dealer network – instead, it has previously acquired complete vehicles from specialist bodybuilders.

In addition to an extensive selection of Approved Used Mercedes-Benz and FUSO trucks, Rygor Commercials offers a variety of pre-built WorkReady vehicles which are based on new chassis and available for delivery at short notice.

King Concrete Managing Director Nigel Leach was certainly delighted with the turnaround time for his first three new-generation Arocs. “We’ve picked up several new contracts and remained busy throughout the pandemic, so needed new trucks in a hurry,” he explained.

“I confirmed my order on a Monday and Rygor’s Truck Sales Executive Marcus Cahalin presented me with the keys to three immaculately presented eight-wheelers the following Friday. No-one’s going to beat that!”

The muscular Arocs range is purpose-designed for construction-related applications and King Concrete’s new trucks are ideally suited to work on rough sites, thanks in part to the raised ride height which gives them excellent ground clearance.

Despite this, the new trucks attract two-star ratings from Transport for London’s Direct Vision scheme. Visibility is enhanced by their ground-breaking MirrorCam technology. Not only does the camera-based system provide much improved vision to the rear, but it also eliminates the forward-facing blind spots caused by conventional mirror housings.

“We have a strong safety ethos at King Concrete, particularly where vulnerable road users are concerned,” explained Mr Leach. “The fact that several of us are cyclists, and ride our bikes to work, means we see the road from a different perspective.

“So when my drivers tell me they love MirrorCam because they can see a whole lot more of what’s going on around them, particularly at the approaches to roundabouts, it tells me all I need to know about this fantastic new technology from Mercedes-Benz.”

King Concrete’s drivers were also quickly won over by the latest model’s radical Multimedia Cockpit, which replaces traditional switchgear with twin screens that are both stylish in appearance and intuitive to operate.

“Image is all-important where our trucks are concerned, which is why we go for high specifications and reward our guys with cash bonuses for keeping them clean,” continued Mr Leach. “As well as being reliable and cost-effective to operate the Arocs is a great looking truck, and particularly these latest models.”

King Concrete supplies high-quality concrete and provides pumping services for commercial and domestic customers throughout much of London and the South East. In addition to its eight-wheeled mixers, the company operates seven pumps – one is based on a 10-tonne Mercedes-Benz Atego chassis, the other six on FUSO Canter 7.5-tonners.

The new Arocs will be inspected and maintained under Mercedes-Benz Complete Service Contracts, along with other vehicles from the King Concrete fleet, at the Heathrow Truck Centre in Stanwell, which Rygor opened this month (September).

King Concrete was established by Mr Leach 20 years ago. His wife Nicola is the Company Accountant while his father-in-law Chris Adams, and brothers-in-law Chris Junior, Stan and Winston also work for the family concern.

Rygor Commercials’ Marcus Cahalin commented: “Building a new truck from the ground up can cause delays and result in unnecessary costs to a business. As customers like King Concrete are discovering, Rygor’s WorkReady programme means there’s no need to wait for production slots.

“We have a large selection of pre-built trucks in stock, including tippers and tipper grabs, skiploaders and hookloaders, as well as mixers. My message to operators is simple: Contact Rygor today, to arrange a demonstration.”