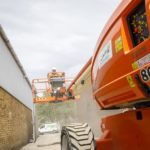 Lincolnshire-based powered access hire company Lincs Lifts Ltd is expanding its depot and fleet of JLG equipment to meet growing demand from both local and national customers. The company plans to extend the rear yard of its premises in Scunthorpe to accommodate several new JLG ultra boom lifts, as well as future investments in its core fleet of 450AJ, 600AJ and 800AJ articulating boom lifts later this year.

The demand for the new ultra boom lifts is being driven by the trend to build taller buildings and factories, according to Managing Director Wayne Grainger. “We’re hoping to place an order worth £1.5m in the first quarter of 2020,” he says.

Since ordering its first JLG model in May 2018 ­– a 1932R electric scissor lift – Lincs Lifts now has a fleet of 26 JLG machines, including five 1932Rs, ten 450AJs, seven 600AJs and three 800AJs. “We will continue to choose JLG because of the level of service we receive, the quality and robustness of the machines, and the strong residual values, which means a good return on investment,” says Wayne.

He also appreciates the support received in arranging finance for Lincs Lifts’ initial investments in JLG equipment. “It’s important for suppliers to support us as a new business, and as we get bigger, they’ll be able to help us even more,” he adds.
Wayne established Lincs Lifts three years ago, with a fleet of ten electric scissors, after spotting a gap in the market. Today, the company has a 300-strong fleet and 21 employees. As a member of the UK Access Alliance, it serves a wide range of customers, including construction, electrical, roofing and cladding contractors, across the UK and Ireland.

Lincs Lifts has also recently achieved the IPAF Rental+ gold safety standard for training – one of only four companies in the UK to do so. Following an independent audit, it proved its ability to meet the most stringent standards of training, advice, equipment and customer satisfaction.

“Having this accreditation shows that we have extremely high safety standards, we service the machines correctly and monitor our suppliers, and will hopefully enable us to work with larger companies and on bigger projects in the future,” says Wayne.