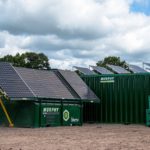 The AJC EasyCabin Smart Solar Site is a solar/battery hybrid solution that can be deployed in a variety of configurations. The system is comprised of three components: 1. A Solar Pod which provides a sustainable power supply to remote locations; power originates from a solar panel and can auto switch (if required) to a back-up diesel generator. 2. A Power Pod a high capacity battery bank that uses batteries as the primary source of power; an operator can attach multiple Power Pods to a site setup to increase the power storage capacity. 3. A Solar Smart plug ‘n’ play solar panel kit that makes every roof a renewable energy source. There are no complicated installation requirements, an operator can simply plug solar directly into cabins, offices etc.  It will auto switch with the local Grid (or Solar Pod) when demand is high.

Over a two month period on site the Solar Smart Site combination saved 2543 litres of fuel, 7.0 tonnes of CO2 which is the equivalent of planting 980 trees to absorb this amount of Carbon Dioxide annually.

Commenting on receiving this award, AJC EasyCabin’s Operations Director Simon Fletcher said, “We were honoured to have such an important company in Murphy Plant to help us to trial this system. Murphy Plant has invested heavily in clean, green equipment for their fleet, so their input in monitoring our system was extremely valuable.”

Brendan Sugrue, Head of Operations at Murphy Plant added, “This award comes as no surprise to us as the system has performed perfectly ever since it was set up. We have saved significant amounts of fuel and lowered both our costs and carbon footprint. We would like to add our congratulations to the AJC team and thank them for helping in our objective to reducing emissions on our worksites.”

The Green Apple Awards began in 1994 and have become established as the country’s major recognition for environmental endeavour among companies, councils, communities and countries. The Green Organisation is an international, independent, non-political, non-profit environment group dedicated to recognising, rewarding and promoting environmental best practice around the world.