Encouraging alternative fuels could save more than 1,250 lives a year, according to the Environmental Industries Commission (EIC) latest research released this Clean Air Day (8 October)

Encouraging alternative low emission fuels such as Liquid Petroleum Gas (LPG) and Hydrotreated Vegetable Oil (HVO) as an interim measure on the road to an all-electric future could save more than 1,250 lives a year.

‘Alternative Fuels: Cutting Dangerous Air Pollution Faster’, argues that where zero emission versions are not yet available or viable, vehicles and machinery should be switched to less polluting alternatives using LPG and HVO. This is especially relevant to construction equipment, and back-up generators.

The report highlights a scheme led by the Mayor of London which enabled black cab drivers to apply for a £5,000 grant to convert their vehicle to LPG, and argues that similar incentives could be used for other high-polluting sectors.

The World Health Organisation (WHO) estimates that as many as 64,000 people die prematurely owing to poor air quality in the UK a year. It can cause coronary heart disease, strokes, respiratory diseases, lung cancer, and severely exacerbate asthma. EIC estimates that around 10% of all air pollution comes from sectors where alternative fuels can be readily deployed, and with evidence suggesting that such fuels can cut emissions of harmful Nitrogen Dioxide (NOx) and Particulate Matter (PM) by 10 to 30%, this could mean more than 1,250 lives saved a year.

Commenting on the findings, EIC Policy DirectorMatthew Farrow said: “While the Government rightly looks to electric vehicles and construction plant as the long-term solution, we should also recognise that alternative fuels such as LPG and HVO – already widely used across Europe – could have an immediate and significant impact on levels of air pollution, especially in built-up urban areas. This move would save lives.”

Founded in 1995, EIC represents the businesses which provide the technology and services that deliver environmental performance across the economy. Members include technology manufacturers, consultancies, universities, and consulting engineers.

Jim Mills, founder of Air Monitors, and chair of EIC’s air quality working group commented: “This report sets out a series of recommendations to encourage the use of alternative fuels. As well as improving air quality, it would reduce CO2 emissions by 90% with no capital expenditure on new equipment or refuelling infrastructure. It’s the common sense solution with an immediate impact.”

To find out more about the EIC click here 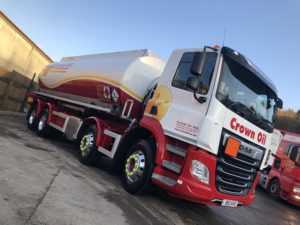 You can read about how civil and environmental engineering experts, Land & Water successfully adopted Hydrotreated Vegetable Oil (HVO) from Crown Oil on its projects by reading the exclusive report on the Construction Plant News website. Click here, or on the image opposite, to find out more.