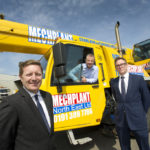 Mechplant (North East), the crane-hire and platform hoist specialist, has received a major asset finance package from Yorkshire Bank to assist with a series of new machine purchases, as part of plans to rapidly expand the business.

The lending has allowed Mechplant to invest in a new 40 Tonne Terex Demag AC-40 mobile crane, with more purchases planned for the final quarter of this year, allowing the company to take on a greater number of contracts across the region, boosting its service offering for its wide-ranging customer base, including housebuilding firms.

The company is also hiring two new permanent staff, seeking two crane drivers in the Port of Tyne, growing its roster (which includes five subcontractors in supervisory and operational roles) to 22 across the whole business.

Established in 2002 and now based in South Shields, Mechplant specialises in Crane hire as well as Passenger and Material hoists to help businesses transport people and materials effectively on construction projects. It has gained a reputation for its skill in supporting complex longer-term projects, from Cathedrals and Castles to modern contemporary new builds.

The deal with Yorkshire Bank follows a recent management buy-out, completed earlier this year at Mechplant, in which the business’ Directors, Brian Wray and Stephen Mackinson, bought the specialist plant-hire division from the holding company, Esh Group, retaining the workforce and becoming the two principal shareholders.

Speaking about the Yorkshire Bank deal, Stephen Mackinson said: “The new working capital from the Bank is key as we grow our market share across the North East and ultimately secure more contract opportunities.

“We have worked hard to develop both of our niche product offerings simultaneously, and the Bank’s assistance will enable us to enhance these, as we provide equipment for an increasing number of businesses within the construction and house building sectors, where we work with the UK’s major brands in an operating area stretching from North Yorkshire to the Scottish borders.

“We’re grateful for their assistance and are hugely excited for the future of our company.”

David Jeffery, Commercial Relationship Manager at Yorkshire Bank, who worked closely with Mechplant on the transaction, said: “We’re thrilled to be backing one of the North East’s high-profile names in plant-hire.

“The company’s management team is ambitious in their sector and have put Mechplant on the map as a key contributor to major projects across the region, including in housebuilding, which is vitally important due to a growing population. We look forward to working closely with the business into the future, as well as other SMEs in the sector.”