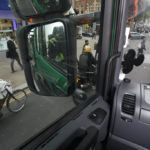 The MPA has warned of the potential dangers to cyclists from overtaking heavy vehicles, including concrete mixers and HGVs, on the left, as proposed in the updated version of the Highway Code.

The proposed change to Rule 163 advises cyclists that they may pass slower moving or stationary traffic on either side. While the whole section advises caution, for cyclists, there is no mention of the significant extra level of care they should take around large, heavy vehicles. In their response to the consultation, MPA stressed that the dangers of this manoeuvre when passing such vehicles needed to be warned against clearly if the Government does press ahead.

MPA is a Construction Logistics and Community Safety (CLOCS) Champion, representing members across the mineral products industry, who have made significant effort and improvements to safety, for cyclists. MPA members are all accredited either to ISO39001 or FORS, the two leading accreditations for fleet safety.

Robert McIlveen, Director of Public Affairs, said: “Our members have worked extremely hard to reduce the risk for cyclists – for example, all our members’ London fleets were compliant with the new Direct Vision Standard well in time for the original deadline, and members regularly took part in Exchanging Places events.

“So, it’s frustrating that this well-known risk has been underplayed in the proposed new version of the Highway Code. It’s really important that cyclists are aware of the risks of passing heavy vehicles, especially on the left, and at junctions.”

0 0 0 0
Previous : Cadman Cranes press on with expansion plans following the delivery of the South of England’s first Liebherr LTM1110-5.1
Next : Volvo reveal the F Generation ECR50