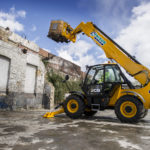 In a multi –million pound deal announced today, the ownership of Mechplant equipment will be transferred to Nixon Hire with immediate effect.

Mechplant, which forms part of Esh Construction Group, have parted with the plant equipment assets to streamline their business operations.

The deal also sees Nixon Hire become the sole supplier of all Large Plant & the primary preferred supplier of Site Accommodation, Toilets and Welfare products for a period of at least 4 years to the wider Esh group.

Announcing the acquisition, Nixon Hire MD, Graham Nixon said “Both companies are based in the North East of England and have worked successfully in partnership for many years now. When the opportunity to acquire the assets arose it was an obvious yes for us.”
“By selling the plant assets to Nixon Hire, Esh will be able to reinvest the cash into their core business. In addition they no longer have the hassle of running a hire fleet with concerns over issues such as; purchasing new equipment, utilisation, compliance, maintenance, transport, breakdowns, residual values and equipment sales. Our principal business is hire, so these things are all part of our day job. Esh can now simply hire the equipment they want from us, when and where they need it. With over £105m invested into the Nixon Hire fleet in the past 4 years, it also means they have instant access to the latest products and market innovations.”

The acquired assets are predominantly large plant items such as telehandlers, dumpers, compaction equipment and excavators. Continuing to base operations out of the existing Mechplant office in Bowburn, a number of employees will also be transferred as part of the deal.

Graham Nixon added, “The Mechplant assets complement the existing product offering at Nixon Hire which makes for a seamless fleet integration. We are also delighted to welcome the new team members to Nixon Hire. This is an exciting period of growth for Nixon Hire and we look forward to continuing the high standard of service delivered to existing Mechplant customers and to forging relationships with new customers as a result of this acquisition. We estimate that this deal will secure approximately £12 million of business in the north east region, a huge positive for the local economy.”