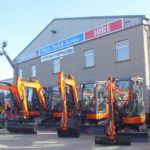 O’Flaherty Holdings to expand its presence in plant hire

O’Flaherty Holdings, the Irish motors-to-plant group, is to expand its plant hire interests in the UK and Ireland

According to a statement announcing its acquisition last month of Derbyshire-based Mainline Hire Group and of Irish-based Drogheda Hire & Sales, which took effect last May, the group states that it will continue to expand its presence in the plant hire market through a combination of strategic acquisitions and organic growth, offering its customers access to a wider offering of modern products and services.

Based in the expanding Co. Louth town of Drogheda – situated on the River Boyne some 30 miles north of Dublin – Drogheda Hire services a burgeoning marketplace stretching along Ireland’s north eastern coast, reaching south into Dublin county and suburbs. In a statement, it is announced that plans are in place to further expand the business with the opening shortly of a second depot under the Drogheda Hire & Sales name on Dublin’s Long Mile Road, on the busy south-west approach to the city.

O’Flaherty Holdings first invested in plant hire in 2014 with the acquisition of London-based Mr Plant Hire.  Going forward, the group states that it will continue to expand its presence in the plant hire market through its AER Rents subsidiary – to be achieved through a combination of strategic acquisitions and organic growth with each business retaining its identity whilst capitalising on the strengths of their collective offerings and reach across the UK and Ireland.

Founded in the 1940s by legendary motor industry entrepreneur, the late Stephen O’Flaherty, O’Flaherty Holdings is owned and managed by members of the O’Flaherty family. Well known through its role in the development of Ireland’s motor industry, through subsidiaries, the group distributes Mercedes-Benz passenger cars and commercial vehicles and operates a network of motor dealerships providing sales and after-sales service for Mercedes-Benz, Mazda & Skoda.