The Mineral Products Association (MPA) has responded to HM Treasury’s consultation on removing the rebate for red diesel. The Chancellor announced the policy in his March Budget, but opened a consultation to assess if some industries ought to be retain the rebate alongside agriculture, forestry and others.

MPA presented four key reasons why the mineral products sector should retain the rebate for the foreseeable future. Firstly, and fundamentally, there is a lack of alternatives. There are no non-diesel alternatives for the tipper trucks, diggers, and other fixed and mobile equipment used in the industry and will not be for some time. Manufacturers are working to develop the technology but it is a long-term prospect.

April 2022 is also far too soon in the economic recovery. Our industry will still be in recovery mode from an unprecedented economic crisis, and the extra cost of fuel, at least £100 million per year at a conservative estimate, will hit confidence and investment plans, slowing job creation and growth.

MPA’s survey of members found all would pass on the cost to customers, 86% in whole or 14% in part. These customers include housing and infrastructure customers. With the Government’s 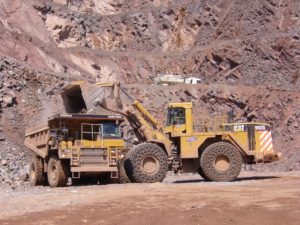 significant ambitions on infrastructure, including HS2, a large proportion of this cost will be paid by taxpayers. For sectors that are traded internationally the cost increase will hamper British companies in competitive markets.

There will be no environmental benefit because diesel will still be used. With the impact on confidence in a tough market our members tell us they will probably slow renewal rates of equipment, meaning there would actually be a perverse outcome of slowly reducing efficiency over time.

MPA Chief Executive Nigel Jackson said: “Our sector has an environmental track record to be proud of with 8,000 hectares of priority habitat created in the last decade and 11,000 more planned in the future, 110 km of new hedgerows planted and 280km more planned, and over 1.5 million trees planted. We also pay a raft of environmental taxes including the Aggregates Levy, Emissions Trading and other carbon costs adding up to hundreds of millions of pounds every year in addition to ever increasing regulatory costs just to stay in business.

“I think the proposed removal of the rebate is grossly unfair when other industries, whose environmental impacts are greater, are exempted and some continue to be subsidised by the taxpayer. We take our responsibilities seriously and think the time has come for fair treatment based on overall environmental performance and cumulative environmental tax burden.

“There currently aren’t any alternatives to red diesel so this proposal will just hit our industry with an extra tax burden, at a time when we are recovering from the sharpest downturn we have ever seen. That recovery is fragile with an uncertain pipeline of new work. The prospect of another tax hit will do nothing to boost growth and can only undermine confidence to invest. The proposal should be shelved until the economy has recovered and alternative technology is available.

“We call on the Chancellor to delay removing the rebate until there are alternatives in the market.”