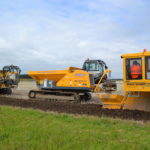 The UK-based designer and manufacturer of self-propelled trenchers manufactured the first CT12 in 1981 to install aggregate backfill for sub-surface land drainage. Over the years, Mastenbroek has improved the CT12, increasing its performance and versatility and today, the trencher offers the perfect combination of features demanded by construction companies operating in the oil and gas industry.

The CT12 is one of Mastenbroek’s most versatile machines thanks to its tipping hopper and forward conveyor. The hopper allows the CT12 to be used as a dump truck to haul aggregate along pipeline rights of way.

The discharge conveyor system is designed for controlled, accurate placement of backfill material either directly into a trench or a hopper mounted on the trencher. The front swing conveyor is controlled by a joystick for left and right-hand discharge through 180 degrees and variable height up to 2.75m. A hydraulic hopper door combined with variable speed control on all conveyors allows the flow rate of the material to be adjusted as well.

For 2021, Mastenbroek has upgraded both the CT12’s engine and operator cabin.

Mastenbroek has invested a great deal of time and effort, making the operator cabin as comfortable and user-friendly as possible. The ergonomically designed cabin features heating and air conditioning, hydraulic elevating to ensure good all-round visibility and is both ROPS and FOPS certified.

As Mastenbroek’s CT12 features a low ground pressure suspended and oscillating undercarriage with high tracking speeds, it can be used in environments where wheeled vehicles are unable to operate.

“The CT12 has proved itself over the years, operating successfully in some of the most arduous conditions, such as on saturated soils while minimising soil compaction,” says Christopher Pett, Mastenbroek’s general manager. “It is a popular machine in utility applications as well, where a backfill aggregate must be placed efficiently and consistently into the trench. We are pleased to have seen increased demand within the pipeline and cable trenching industry over the last few years and believe the introduction of the D8 engine and new cabin design will make the CT12 even more attractive to those operating in the oil and gas industry.”

Mastenbroek manufactured its first trencher in 1977, since then the company has grown into a globally respected name in trenching, machine automation through its partnership with Trimble®, subsea cutting technology, ground stabilisation and groundwater control.