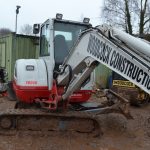 When it comes to building industry growth, at present the house wins and J G Woodcock Construction has the plant and expertise to capitalise, including three new Takeuchi excavators.

Founded in 1970 by the late John Woodcock, the construction company that still bears his name has a long tradition of new house builds from its very inception to the present day, and of owning the equipment required to realise them.

“As a business we’ve always invested heavily in plant but have previously become disenchanted with the service and support some manufacturers have provided,” explains company director, John Turner.

“Since taking on three Takeuchi models within the last twelve months, we’ve been pleasantly surprised, first and foremost with the capability of the machines, but also with the level of after-sales attention.”

As a company, J G Woodcock Construction has the years of experience that can testify to the evolving trends in the construction of domestic properties, and in recent times the utilisation of land to its maximum is making for ever more compact sites. That means that smaller machines are required to do more work in ever tighter spaces.

“It was increasingly becoming clear that the size of machines that we owned were too big,” continues John, “so started to utilise 3-tonne minis from other manufacturers, initially on a hire basis, but equally found they were limited in what they could achieve.”

In the search for more power, but with a favourable footprint on site, John turned to Zac Clulow of Bow Plant Sales, who recommended a 4-tonne TB240. “This is a versatile and adaptable machine that we’ve found we’re making very good use of. It’s exceptional reach means that it can even load an eight-legger lorry, and immediately filled the gap we had in our fleet.”

In fact, amongst its peers in that class the Takeuchi 4-tonner performs very favourably in break out force, whilst benefitting from a dig depth of 3,465mm, all from an overall frame that is well suited to the modern crowded site.

The appeal wasn’t just in the machine, however, because as the Sales Manager of Bow Plant Sales explains, it was clear that John and his team were looking for the kind of relationship with the dealer that substantial investment in machinery demands. “Good service support is about communication and listening to what our customers need, and that’s what we’ve hoped to achieve with J G Woodcock.”

In fact, when the contractor was called upon to complete the groundworks for a United Living site in Wolverhampton, the job had particular challenges, not all of them construction-related, and Bow Plant Sales input proved invaluable, as John explains:

“On that project we’ve been installing drainage and storm systems, as well as ducting for low voltage communication systems. Security issues in the area, however, demanded that we take the machine away from site as often as possible.

“Zac took me down to Bow Plant Sales’ Leominster offices, and we had a discussion about the TB23R. This is a 2.6 tonne, reduced tailswing, where even the sliding door mechanism keeps everything within the confines of the tracks, but it can still be towed on a trailer from the back of a pick up by a driver with a standard licence.”

Not only were J G Woodcock able to take advantage of the dealer’s considerable expertise in diggers, but they also sourced an Ifor Williams trailer for the new TB23R, and have supplied a range of Atlas Copco attachments for all three of the new Takeuchi acquisitions. With a very productive working relationship already in place it was inevitable that, when circumstances demanded, John would again turn to Takeuchi for a solution.

J G Woodcock had a 6-tonner from a rival manufacturer working on a larger site of 14 houses, but it was quickly becoming apparent that a unit with more grunt was required. “I was initially looking for a 9-tonne alternative but Zac made us aware of the new 15-tonne, TB2150. Because of the extra features, like the offset boom, it was a pretty easy decision to make.”

The track footprint of the Japanese manufacturer’s flagship 15 tonne model is just 2,690 x 3,580mm but, with 98.7kN bucket breakout force and 5,225mm dig depth, it still has the power to accomplish larger excavation works – and the benefits don’t end there.

“Given the tightness of our sites, the offset boom is a wonderful feature,” enthuses the Shropshire-based building firm’s Director. “It means we track into areas that would be inaccessible to other machines, whilst you’re not constantly re-positioning the machine, which has a favourable impact on fuel consumption and general wear and tear. Add to that the levelling ability with the blade and you’ve got a very useful piece of kit.”

Construction Plant News visited the Bridgenorth site where the TB2150 is presently earning its keep and the versatility of the machine is immediately apparent. This is a mixed development of 2, 3, and 4 four bed properties where space for larger pieces of plant would be at a premium.

Not only is the machine, together with its smaller TB240 sibling, performing all the necessary excavation, it’s also being utilised for lifting concrete beams for the suspended beam and block floor.

Concludes John: “Given the amount of work we’re generating at present, and the experience we’ve already had with the machines themselves, together with the service from Bow Plant Sales, I can be confident that I’ll be having a conversation with Zac in the near future about the Takeuchi TB290 9 tonne and our association with Takeuchi will certainly go on.”