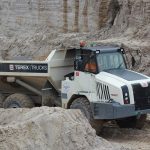 G Crook & Sons, a family-run business, is putting a fleet of Terex Trucks’ 28-tonne articulated haulers to work at its sand and aggregates quarry in Dorset.

Operating in a 50-mile radius within Dorset, G Crook & Sons has premises in Dorchester and Poole. One such is the Redbridge Road quarry, where the family-owned business is using four of Terex Trucks’ TA300s to transport sand from the pit to the stockpiles. Fitted with the Scania DC9 five-cylinder 9.3-litre engine, the 28-tonne (30.9-ton) capacity articulated haulers work a minimum of eight-hour shifts daily.

Established in 1972, G Crook & Sons was founded by George Crook with a primary focus on plant hire. Alongside his son Barry, George grew his operation, which initially began with an old tractor, trailer, and a digger, to become one of the largest privately owned plant and machinery hire companies in West Dorset.

“Over the last 45 years we’ve expanded the business significantly and gone into different ventures, such as stone and aggregate quarries, pubs and hotels,” says Simon Crook, director and workshop manager at G Crook & Sons. “We’ve got multiple sites, tyre depots, and we’ve even got an agricultural centre as well – where we sell all our tractors into the farming industry.”

G Crook & Sons became first-time Terex Trucks customers in 1995 with the purchase of a TA30. Having never looked back since then, the company now owns a fleet of 15 haulers which are a mix of TA30s and TA300s, with its most recent four acquired in spring 2017. Supplied by Terex Trucks’ UK distributor, TDL Equipment, the reliability of the Motherwell, Scotland built machines have steadily impressed G Crook & Sons.

“The quality of the dumpers are unmatched,” says Crook. “The trucks are extremely reliable and that’s why we’ve not only got them in the aggregate quarry hauling the sand out of the pit but we also use them for the muck away shifts, roadworks, and general tasks.

“Also, the way we see it that Terex Trucks and TDL have formed a great partnership. If there ever is an issue we get a speedy response. With some of Terex Trucks’ competitors we might not get a reply from them for two days, whereas with TDL it’s very quick..”

Terex Trucks’ TA300 is a proven design which has the proficiency to overcome the most demanding conditions and move material as quickly as possible due to its excellent traction and effective power-to-weight ratios.

The machine offers minimum cost of operation and maximum productivity. With independent front suspension as standard, tyre/ground contact is maintained on tough terrain, increasing tractive effort and reducing cycle times, while also providing operators with a comfortable haul. Created to work harder for longer, G Crook & Sons’ haulers have stood the test of time, with some running past the 10,000-hour mark.

Covering approximately 150 acres, the Redbridge Road quarry is host to some of the finest sand available in Dorset. To recover the raw material, the articulated haulers travel along a muddy clay-like landscape to descend below the earth where it is then loaded with heaps of sand. Helping G Crook & Sons meet the demands of its customers, the TA300s work around the clock shifting the sand, which is known to prove quite troublesome for the trucks.

Crook explains: “The quarry can be aggressive and hard wearing on the machines because of the sand as it ingresses into the components and they wear much quicker than they normally would. But it’s not a problem that we’ve had to worry about with our Terex Trucks machines because they’re pretty robust.”