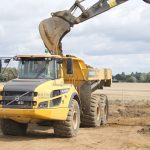 Diversification and fleet expansion has been key to the continued success of The Walters Group this year, which has invested heavily in new plant during 2017, including orders for 45 Volvo machines from UK dealer, Services Machinery & Trucks.

“There’s been big growth in 2017,” said Group Managing Director, Huw Richards. “We have a longstanding relationship with Volvo Construction Equipment Products, particularly with articulated dump trucks, and the latest Volvo E series excavators are proving to be highly reliable to the point that Volvo machinery is heading towards making up half our fleet.”

For more articles about Volvo click here, here and here.

ADTs have again been at the heart of Walters’ investment during 2017, with the company taking sixteen of Volvo’s latest A45G trucks along with a further eighteen of the A30G model. The trucks were required predominantly to meet the needs of both road construction projects, like the A14 Cambridge to Huntingdon scheme, along with Bardon Hill Quarry Extension in Leicestershire.

In addition to the A45G and A30G trucks, Walters has purchased two EC480EL crawler excavators, two EC380ELs and an L180H wheeled loader in recent months. The group’s rental division, Gorrel Equipment Solutions, has also been adding to its predominantly Volvo fleet, taking six L110H Volvo loaders this year, alongside a L150HLB and a L120H.

The company will be trialling Volvo’s Haul Assist fleet management tool to assess exact performance and productivity later in the year, but early signs are that the A45G is a strong performer on all types of haul. “Overall, we’ve been very pleased with the A45s,” says Richards.

“With telematics there is an early warning of potential breakdowns and we can also assess productivity. It’s all about fleet utilisation and we’re always having to play a mix of A25, A30 and A45 trucks to suit the loading excavators and the length of haul. But we’ve got a really big year on the A14 in 2018 for dump trucks.”

While it’s possible to provide more equipment when required, finding good operators continues to cause concern for many of the UK’s major earthmoving contractors. Walters Plant employs more than 360 operators and fitters at present, many of whom have been with the company for at least 10 years. The company also has an in-house operator training facility and employs apprentice technicians and drivers. A14 Cambridge to Huntingdon Improvement Scheme

Walters is a partner to the A14 Integrated Delivery Team, which includes Costain, Carillion, Balfour Beatty and Skanska, working on the £1.5bn improvement of this crucial arterial road in Cambridgeshire. The project includes a major new bypass to the south of Huntingdon, widening parts of the existing A14, widening a section of the A1 and demolition of the existing viaduct at Huntingdon.

The project includes the construction of 30 new bridges and underpasses, 35km of new or adjusted road alignments, the creation of six borrow pits producing 6.5 million m3 of material, 12 flood compensation areas and 60 drainage lagoons. In total, more than 12 million m3 of material will need to be moved over the next three years.

Walters has been awarded the earthmoving packages for Sections 1, 2 and 3 of the five-section project. The firm currently has 70 dump trucks working on the site, a number that is expected to rise to at least 100 ADTs by the summer of 2018. “We’ll need to move 20,000m3 per day,” says Rob Bashford, Walters’ Project Manager on the A14.

There are also 30 excavators at work, from 14 – 50 tonnes operating weight, of which 20 machines are equipped with GPS machine guidance systems. Twenty-five bulldozers and 18 vibratory rollers complete the Walters fleet on site with the company employing 200 personnel across the project. Next year this could rise to 40 excavators between 14 – 90 tonnes and 30 dozers.

On Section 3, the haul road is between 4 – 7km long, which is where the heavier articulated trucks are really earning their keep and proving their increased productivity. Once archaeological works have been completed this year, Walters will be able to bring in additional machinery to really get the earthmoving contract up to speed.

The quarry at Bardon Hill in Leicestershire has been a feature of the local landscape for more than 100 years and now provides a European headquarters for Aggregate Industries. With permissions for at least another 40 years of rock extraction, the site is being extended, with Walters Plant awarded Phase One of the extension project.

The 128ha extension began in April 2015 with Walters contracted to the middle of 2019 to carry out all earthworks, soil handling, overburden stripping and removal, in preparing the site for quarry works. Over this period the company will strip 1m3 million of topsoil and around 5.25m3 million of overburden, creating land forms around the site.

Walters will also remove 4.5 million tonnes of rock from the quarry in preparation for the main quarrying works to continue. The company is working with BAM Ritchies to carry out blasting work and to prepare a 28m deep slot for a specialist contractor to install the main primary crusher to the new extension.

Following Phase 1, there will be 8 – 10 years of overburden handling and up to 40 years of rock extraction available at the site. Walters’ primary goal is to prepare the site to provide up to 4 million tonnes of rock a year by mid-2019.

Material is being removed using three new Volvo EC480EL excavators, along with a Volvo EC380EL. The site is also operating two 120-tonne excavators, an 85-tonne machine and a 75-tonne crawler. Among a fleet of more than 30 articulated and rigid dump trucks, Walters has eight new Volvo A45G ADTs, five A40Gs and two A30Gs working at Bardon.