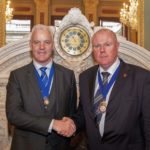 East Midlands demolition firm AR Demolition has marked another success in 2018 with the election of managing director Richard Dolman as vice president of the Institute of Demolition Engineers (IDE).

Mr Dolman was voted into the position at the IDE’s annual general meeting, held in Drapers Hall in London earlier this month. The honour caps an eventful year for AR Demolition in which the company, which is based near Nuneaton, achieved record turnover and was named in the London Stock Exchange Group’s prestigious ‘1000 Companies To Inspire Britain’ report.

Mr Dolman said: “AR Demolition is becoming recognised as a truly innovative, cutting-edge company and we are doing our part to help create a demolition industry for the future.

“I hope to use my position as vice president of the IDE to help address the skills shortage, inspire a new generation of demolition engineers, to promote ideals throughout our connected sectors and promote safer ways of working in our industry. I look forward to working closely with the IDE’s new president Gary Bishop in working with industry and government bodies to promote innovative thinking to complex scenarios, sharing best practice and raising the positive professional profile of demolition within the construction industry.”

Mr Dolman was made a Fellow of the Institute of Demolition Engineers in 2016 and already occupied a seat on the body’s council of management. Alongside other IDE members he has been instrumental in developing and promoting the industry’s first Foundation Degree and Masters Degree in Demolition Management, with the University of Wolverhampton.

He said: “As owner of AR Demolition, I am a passionate advocate of innovative demolition techniques and health and safety best practice. Our company has invested heavily in cutting-edge plant over the past two years, bringing efficiency, safety and environmental benefits for our personnel, our customers and the communities in which we work.

“The other major issue I want to tackle is the skills shortage in our industry and this is where our work with the University of Wolverhampton can be key.

“Alongside the qualifications which I and two of my co-directors are currently studying for, we are also proud to be developing graduate schemes and apprenticeships which will help attract talent from the construction sector towards our industry. The demolition industry has great potential to contribute practices and processes which can have enormous and widespread ramifications throughout construction and society in general. I am excited to be in a role at the IDE which can help facilitate that change.”

AR Demolition recently reported its best ever start to a year in the first half of 2018, with the six month period to July seeing turnover rise by 54% compared to the same period in 2017 and with year-on-year gross profit increasing by 18%.